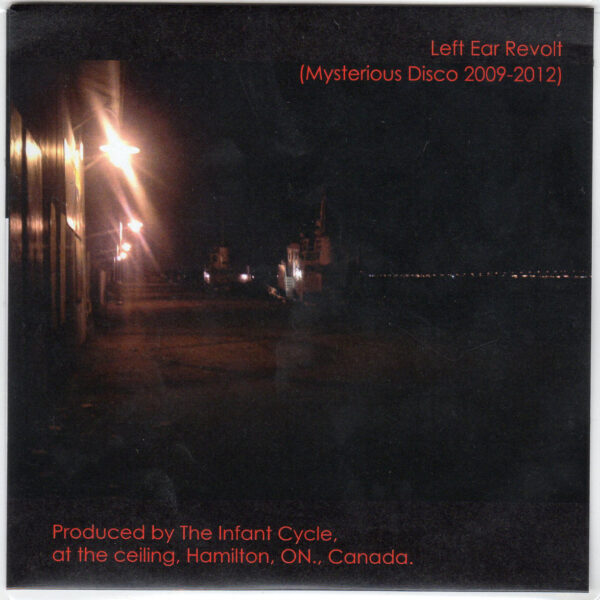 Remarkably and eerily melodic results from an unconventional choice of sound sources including bird cage from this Ontario-based producer of ambient drone works. The first three tracks are apparently culled from a circa 2009 MP3 single: Plays Fender Bass Guitars and Bird Cages of Unknown Origin, Exclusively which is the kind of single-minded approach to composition that I can really relate to. The first offering, ‘Shiny Venus (over s.st)’ is marred only slightly for me by some arbitrary reverse sound loops which comprise the ending. These, though, are nicely offset by the brief, gossamer ambience of the next piece ‘Shiny Venus (detail 1)’ which acts as a bridge into the last canvas of the triptych – here, on ‘Shiny Venus (detail 2)’, the reverse loop strategy returns but this time acts as the core structure of the music.

‘Red Mars Over Main W.’, the next track, apparently utilises sounds derived from playout groove, trombone, and railyard (presumably field recordings of same), – all heavily processed – and the results are somewhat akin to the mid-late 90s glitch style prevalent in German electronic music. At this point I’m confused, it makes me wonder why you’d want to realise such a faultless carbon copy of German glitch with such individual sound sources in the first place. No specific dates are given for each piece of music, and as this retrospective’s stated period is 2009-2012, it is likely that this recognisable stylistic device is referring back to glitch electronica rather than being a contemporary of it. I’m still not sure why, unless this is done with some kind of irony, the point of which I’m missing. Yet, there’s rich little seams of Industrial sounding material in there as well, which put me in mind of the way Napalm Death go to the trouble of recording intricate Industrial soundscapes as a massive contrast to their one minute grindcore songs.

Track 7, ‘Untitled (abridged)’, features some interesting slow-core, abstract, machines-breathing type noises but by the next track, ‘Shiny Venus Over Stuart Street (detail 2 unabridged)’, things are becoming a little repetitive and flat. Too much over-use of similar ideas, and an over-reliance on the reverse loop button on the sampler again but that’s a personal dislike of mine. Then again, it’s a longer track at over 13 minutes and as it perambulates, digging its own groove in an upturned tree stump like some kind of organic locked groove, the sap starts to congeal and discolour in subtle and interesting ways.

Given The Infant Cycle apparently have over twenty previous releases plus a glut of compilation appearances and collaborative items, it strikes me that four years is a small window for this type of retrospective for a musician who has been active since 1994 (I’d be interested to hear how some of his earliest work compares), and a failing of this compilation in general is that any development over that time has been shown here in quite small increments.

The Infant Cycle
The Ceiling