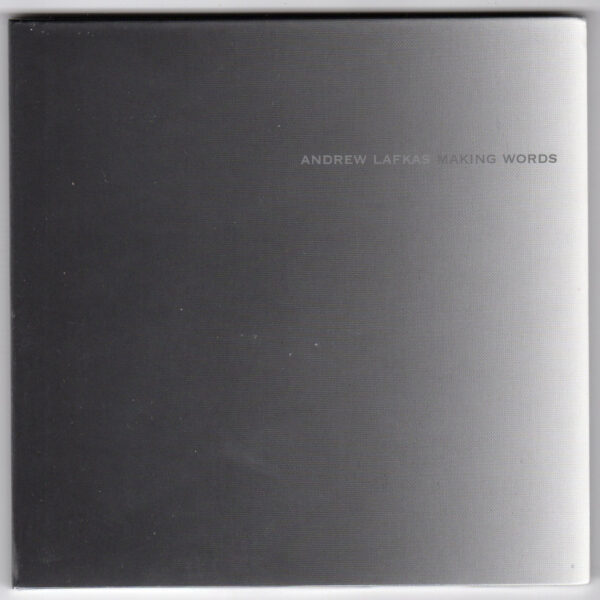 A fairly large ensemble this; eleven instrumentalists – four on electronics. This intriguing grouping was recorded live at The Lutheran Church of The Messiah in Brooklyn, New York in 2010. The sleeve-notes refer to Making Words as combining “…graphic and traditional notation, and…with the abilities and input of each member of this traditional ensemble in mind.” Unfortunately, the sleeve is a dour, featureless monochrome affair with no visual hint at what this graphic notation might look like, which is a shame. An opportunity missed by Lafkas or Sacred Realism; or both.

Given its duration – a smudge over 70 minutes – this performance, which became Making Words, would have been challenging for both musicians and audience. The piece itself seems initially comprised mainly of long tones and notes held for as long as possible, then building to a particularly apocalyptic section around fifteen minutes. This beginning section makes quiet, pastoral use of slow, pure-moving electronic tones that spiral and gestate for about three minutes before any discordance is allowed to creep in. At 14 minutes a sticky morse-like rhythmic crackle becomes audible, which then leads in to a longer section of brutal string scrape – a marked contrast to the strings’ nervous jittering later on around 25 minutes. The dynamics of this section of Making Words put me in mind of Michael Pisaro’s A Wave And Waves at this point, only without the insane amount of detail painstakingly parqueted into Greg Stuart’s amazing realisation on Cathnor Recordings. After that point though, the analogy ceases to be relevant. But not in a bad way.

The electronicists come alive around 22 mins and conjure a hurricane. Some of the electronic sounds seem almost human and I’m lost in the maelstrom for a little while. However, by the three-quarters of an hour mark, the strings are sawing away ineffectively and all the other musicians seem to be looking at their watches, occasionally listlessly striking a piece of metal here or letting off a gas canister there, luring the listener into a false sense of banality until… I wasn’t expecting this: at the 50 minute mark, there’s shades of Ligeti; it’s suddenly so oppressive, like getting up first thing in the morning in Kerala in January and its already 36 degrees – I felt like I could be in a Stanley Kubrick movie. This pressure builds in intensity, unrelenting, right up through this whole twenty minute section, right to the end of the piece. And then the ending – sometimes these things just end. With recorded drone-based works no resolution is necessary, perhaps, the work can acceptably be defined by the length of the format it was intended to be released on. But with a performance like this one; what a rare thing: a perfect live composition facilitated by random, human means.