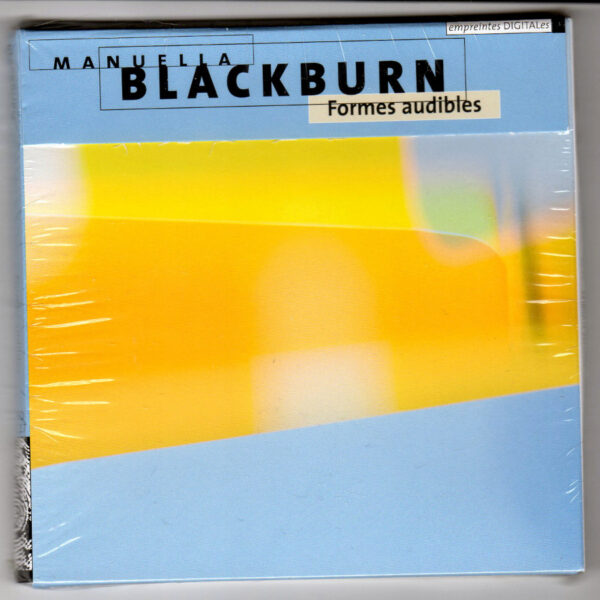 If ever there were just cause not to judge a book (or CD) by its cover then this is it. The sleeve’s hazy smudge of tame blue and yellow is more indicative of a Rothko-esque William Basinski rip-off than an ontologically expansive, electroacoustic orgy. Look more closely though and a telling detail reveals that this is another CD on the redoubtable empreintes DIGITALes label, whose bold claim to be ‘the world leader in electroacoustic/acousmatics’ will solidly stand-up to any bench test. In fact, given the daring new vocabularies voiced on recordings such as this, the debut from the UK’s Manuella Blackburn, I’m visited by an overpowering sense that I am the one being tested.

One need only glance at Blackburn’s biography to be dazzled: barely in her thirties, she is a lecturer in Music Technology at Manchester University and has already taken home a slew of illustrious awards from international electronic music events. However, venture into the music and you will find yourself lost for words. INA GRM fiends may find themselves at home amidst this spellbinding selection of surgically sculpted, swiftly shifting sounds and tunneling tones, cosmic flourishes and vacuumed hushes; all emulsified by a convulsive cohesiveness that obviates any hint of homogeneity, while marking every tone as Blackburn’s own. However, for other listeners it may be like ‘spherical trigonometry for the inhabitants of Flatland’, as Aleister Crowley put it.

Track titles range from the open-ended (‘Switched On’, ‘Vista Points’, ‘Kitchen Alchemy’ and ‘Spectral Spaces’) to those of a more orientalist ambiguity (‘Karita Oto’ and ‘Cajon!’). More than merely cursory designations, they successfully signpost the strange realms of sonic mysteries (to be) traversed not just by the listener, but the composer as well. Blackburn has personally articulated the discovery process by which she arrived at certain source sounds, before proceeding with an exploratory process of creating cohesive (if temperamental) compositions. The latter titles – more exotic designations – depict encounters between origins foreign and familiar perhaps found during the composer’s travels, as does the use of a French title for the collection.

These six compositions were realised between 2007 and 2011. All throughout, sound sources from guitar to household appliances are rubbled to clouds of recognisable remnants that are animated into play perhaps best viewed in infrared, as they are climatologically morphed in a febrile, fluctuating maelstrom. Some of the recurring ‘audible forms’ include pointillistic flutters in particle accelerators, powdered performance samples draped over air currents, punctuated by split-second stabs of alien alloys, plunged into low-density liquids, and tucked into electro-gossamer sheets of pure tone. Fans of Bernard Parmegiani or Francis Dhomont may find themselves on familiar ground, but will equally be delighted at so fresh and authentic a manner of articulation.

In ‘Vista Points’, flurries of improvised guitar are fleshed out, strings amplified to an almost glassy pitch, and spray-painted with myriad layers of twittering designer genes. The resulting ‘causality, conflict and turbulence’ is captivating, especially so in the sudden moments, when the piece’s initial stability yields to a terrible tension between explosive pressure and release/tentative stillness and paralysing presence, and the atmosphere is engorged with crackling clouds of electrons.

The sound source in ‘Switched On’ is an aged television, from the wake-up stage of which the composer has coaxed unfamiliar flutters and frequencies – some just a split second in duration – and painstakingly corralled them into a towering cake of ‘cascades and explosive flourishes’. The realised piece – a polyphony between chimes and switches in alternating on/off states of animation – surges with the electrical life force of a seemingly dormant device, which depiction succinctly epitomises much of Blackburn’s composition: originating in a static state, suddenly seething violently but with volition and direction seemingly more evolved than the sensory apparatus of the listener.

‘Karita Oto’ (‘borrowed sound’) derives equally from a number of traditional Japanese instruments (the samples were taken during a 2008 trip to Tokyo), and ‘compositional strategies developed from Denis Smalley’s spectromorphology’. The piece follows an ‘episodic structure’ through which ‘cultural’ sounds are deconstructed to their very DNA, and reformed into glistening web ladders thumped and plucked by monstrous spider appendages. The duality that informs this composition of contrasts is, according to Blackburn, inspired by the oft-remarked upon extremes found in Japanese culture, such as one might find during a daytrip around the Zen temples of central Kyoto.

The immediate and relentless ‘Kitchen Alchemy’ careens like carnal relations between mercurial bodies as if heard from within: an amorphous, unstable globule of rippling liquid metal spitting out bulbous bursts of machine-whir with undertones of deep gong resonance. Like ‘Karita Oto’, the piece’s acousmatic exegesis of kitchen utensils is realised via Denis Smalley’s spectromorphological language and ‘structures created from a variety of onset, continuant, and termination vocabulary combinations’, which certainly bears out the eponymous alchemist’s jargon-heavy patois. And while some might regard the invocation of alchemy qua compositional paradigm as clichéd, then the composer’s application of esoteric and individualised processes to the end of elevating base matter into something precious certainly offers some justification.

‘Cajón!’, which utilises recordings of the eponymous Peruvian percussion instrument, kicks into gear with superhumanly swift, scattershot rhythms that descend and depart with bewildering frequency, mutating in form and volume with each pass, as though having gained self-awareness and attempting to escape through the speakers. And, even as the atmosphere is slowly divested of its density, a feast of flamenco handclaps, metallic clicks and scrapes are masticated with similar gusto.

‘Spectral Spaces’ surveys a radiant vista of modulating twitter with violently tugging riptides, as thought the shimmering sound of light itself had been liquefied and amplified atom by agitated atom. Consisting of four ‘passages of concentration, crossover, overlap, and interstices’ divided by slices of silence, the piece touches upon a simpler, but no less extreme audio range than the other pieces, seemingly desirous to return to the shimmering state of grace in which it opens.

Interviewed in Bananafish magazine (issue 15), Romanian composer Ana-Maria Avram articulated her compositional challenge as ‘to build the whole from almost nothing, from fewer and fewer things…’ The same could be said to apply to electroacoustic music in general, but Blackburn’s compositions provide perfect exemplification. Her exacting approach to the arrangement of elements – often microscopic in size – facilitates the formation of an alien syntax from phonemes familiar. These six pieces are as hypnotising in their brief moments of luxuriance as in their explosions of visceral morphology, and will yield their manifold mysteries for much time to come. By the same token, unless the listener is particularly masochistic, these pieces are probably best digested at the very gradual pace at which they are NOT delivered, so I would caution listeners to ‘chew slowly’. Speaking as an armchair enthusiast though, I cannot overstate just how exciting and refreshing this music is.