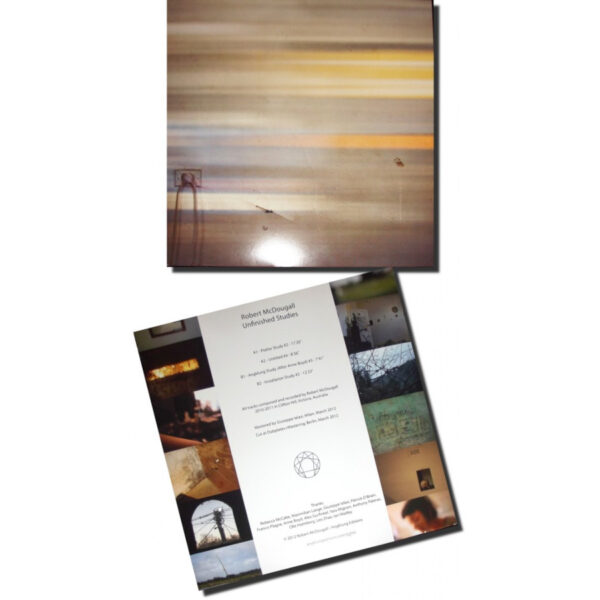 Now an ultimately absorbing and beautifully realised slice of vinyl hailing from the antipodean quarter, 2012. This comes in the form of the Unfinished Studies l.p. by Robert McDougall, a Melbourne-based electro-acoustician and label boss, who certainly appears to have a fresh handle on investigations into the disciplines of avant-garde composition. A pleasing meld of pre-production treatments, electronics and field recordings can be found on the four long pieces within the somewhat anonymous-looking sleeve art. Starting with “Platter Study No. 2”; in which the platter in question appears to be a recording sourced from some ancient eastern ceremony, where distant gong/metallic bowl (?) tones are under threat of being consumed by a fluctuating foreground hum of unknown origin and, of course, the reassuring crackle that only distressed shellac can produce. “Untitled No. 4” uses the same brand of disconcertingly blurred perspective as “Platter…”. The shimmer of a gently uncoiling keys/guitar figure is set against the distant hubbub of what seems to be a village market and reminds me of one of those gauzy dreams that’s remembered on the very cusp of awakening, before melting away forever. Further distant metallics are employed in “Installation Study No. 2” in which the sound of an all pervading outboard motorboat drone is eventually punctuated by some quietly struck drawing-room piano chords, giving added dramatic import. My favourite though, is derived from a piano piece by Anne Boyd, a music professor from the University of Sydney. “Angklung Study” sounds, for all the world, like an outtake from Cluster, during their fields and streams period, circa Sowiesoso. Rather damn fine. A soft insidious assault on the senses, where…more or less, less is more.
A limited edition of 300 through Angklung Editions.