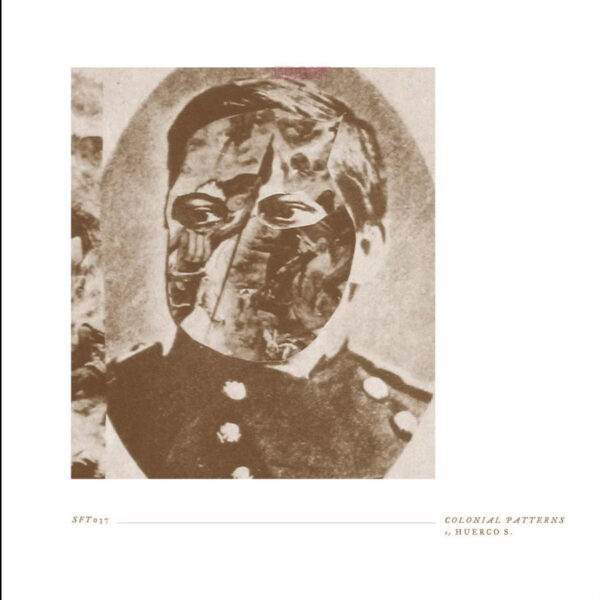 A very curious album title indeed: “Colonial Patterns” suggests that the album itself is a record of the tapestry of cultures, long since gone, that dominated the United States from the Atlantic to the Pacific. There may be a sly reference to tendencies within the American psyche that arise from time to time: tendencies that Western governments and corporate media would prefer we didn’t know. America as imperialist war-mongering power, as captured in the cover art collage, yet also America as repository of cultures that have co-existed and then blended with one another, leaving traces in the modern culture: all this is referenced in one way or another on the debut album for Huerco S aka Brian Leeds.

For an album whose basic style is techno, this is a very laidback recording that doesn’t insist on hogging all your attention for its entire playing-time. “Colonial Patterns” comes across as more mood ambient and abstract than electronic: sounds are muted and softened, and there is a kind of cloudiness over the looping rhythms, the quiet buzz and discreet effects. Although individual sounds may be similar to what we’ve heard before, they’re combined in ways that don’t reference anything familiar in our experience so we have to hear them with open minds on their terms. There’s a wistful air and yet the music seems so abstract, even repetitively geometrical in some tracks like “Quivira”, and futuristic in style.

Tracks are often little more than rhythm textures and some like “Inzhiid” can remind the listener of more club-friendly techno acts like Actress and Pantha du Prince. As the album progresses, the music goes through phases where it’s not much more than toy tunes going nowhere and the parallels between Huerco S and Actress become much more obvious to the point where it seems Leeds is almost consciously referencing the UK act.

It’s a pity that the album peters out the way it does with pretty tunes and textures because several of them are very intriguing pieces that could have been very atmospheric if some thought had been given to their further development beyond repetition. It’s not enough these days to record a few minutes’ worth of rhythm loops of electronic pulses and tones; you have to let the sounds suggest something to you and you take that idea and extend it as far as it can go within the general framework of the album’s themes.