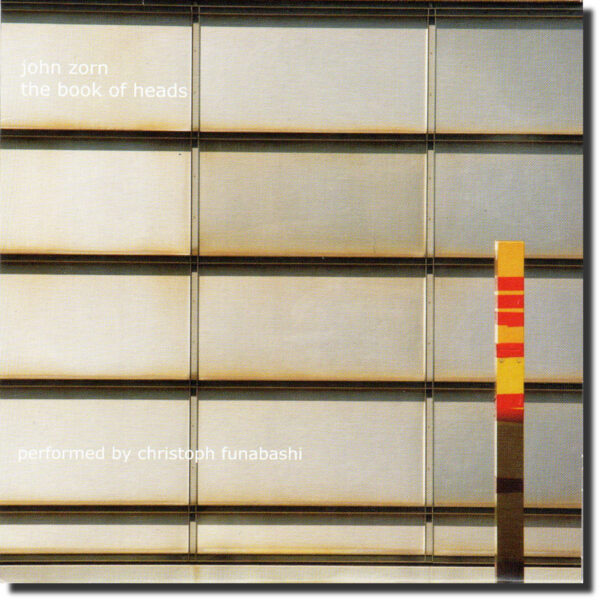 Here be 35 etudes for solo guitar written for Eugene Chadbourne to perform by John Zorn way back in 1978, which have already been recorded once before by the unassailable Marc Ribot. Christof Funabashi, clearly a fan of the piece, decides to have a go here, for good or ill.

It may be worth pointing out for those who thrive on detail, (and gossip), that the American guitarist James Moore includes The Book Of Heads in his current repertoire and is apparently also releasing his own recorded versions on Zorn’s own Tzadik imprint in 2014. Whether this implies Zorn’s seal of approval which Funabashi’s release on Schraum clearly lacks, I hesitate to speculate upon. The Schraum website gingerly points out that “…Before embarking on this project, Funabashi and Schraum obviously had contact with John Zorn himself, talking about the compositions and the recording process itself…” although no more information regarding Zorn’s feelings regarding or engagement with Funabashi’s version are forthcoming. This should not influence your opinion of this release in any way; in fact it probably says more about my own inscrutable need to stir this particular (very possibly irrelevant) cat and pigeon broth, so please accept my apologies and allow me to continue with the job in hand.

Let’s consider the basic nuts and bolts of the thing – thirty five etudes for solo guitar is a lot and for some people might be thirty-four too many, but if you have a penchant for the unorthodoxies apparent along the axis of Derek Bailey/Eugene Chadbourne/John Russell/Marc Ribot/Ferran Fages then you have a goodly chunk of guitar schmutter to get your teeth into here. Wikipedia describes The Book Of Heads thus: “…Zorn learned the extended techniques from Chadbourne, and used them to create a piece that would push Chadbourne’s virtuosity to new levels. Zorn incorporated new techniques, such as rubbing balloons on the guitar strings until they pop, holding talking dolls up to the microphone, pulling the guitar strings out of the bridge notch, hitting the strings with pencils, and playing with rice. He also used classical guitar techniques, such as hitting the body of the guitar and multiple harmonics.” Which, I’m going to grumpily point out, all sounds like stuff that people have been doing at the London Musicians Collective, Eddie Prévost workshops, Derek Bailey’s Company Week, Mopomoso, Klinker, Club Integral, FlimFlam, etc. for the last 200 years. And those are just some of the organisations from the UK, never mind mainland Europe and beyond. Indeed, John Zorn post 1978 explored many very different areas of composition, but The Book Of Heads can still be seen as relevant today as a useful reference catalogue of improv manoeuvres.

Perhaps inspired by Brian Eno and Peter Schmidt’s Oblique Strategies deck of cards first published in 1974, Zorn designed the score as a set of 35 cards. These featured both graphic and traditional musical notation plus written instructions allowing both precise direction and interpretation by the performer. It is stated that the cards or “heads” are intended to be performed as written; the means of performance being based on improvisation.

Simultaneously virtuosic and rudimentary; Funabashi presents his own take on multiple options for guitar techniques and styles. It’s a kind of scattergun approach to improvisational strategies, and, for me, in places a rather academic and dry reading. For my tastes, Funabashi’s attempts fall a little short on interest; indeed it sounds uncomfortably to me like he’s maybe flagging slightly on the ideas front towards the end. It’s not all bad; some parts are engaging; but occasionally a trad jazz lick rears its ugly head – there’s a time and place for this sort of thing in my opinion and that’s absolutely and entirely; only ever at a trad jazz concert. This is, of course, my own personal opinion and perhaps I’m being unfair – this pinstriped flourish may in fact be a requirement of the score. But if it is not, then for me its inclusion by Funabashi serves only to diminish the piece. Funabashi, a man who describes himself as moving “…between the song-forms of indie rock, the language of contemporary music and the openness of improvisation…” which, dare I say it, seems a little wide a remit for comfort, has chosen a relatively academic project compared with his other stated interests here.

It is also, for what it’s worth, my opinion that guitarists like Keith Rowe and Derek Bailey have, commendably, done far more than their fair share to promote alternative forms on guitar already. The temptation is there to use The Book of Heads as a kind of shorthand device for extended technique. Which would be a shame if it diminished the work, (or the composer, or the performer), in any way.

For a quick overview, a short promotional video can be found, and should be viewed by anyone with an interest here which in itself is a professional-looking little visual vignette that nicely illustrates the project, but superficially certainly puts the album in a very good light but implies an importance which I’m not totally sure it deserves. At least not just yet – time, and history, will tell.