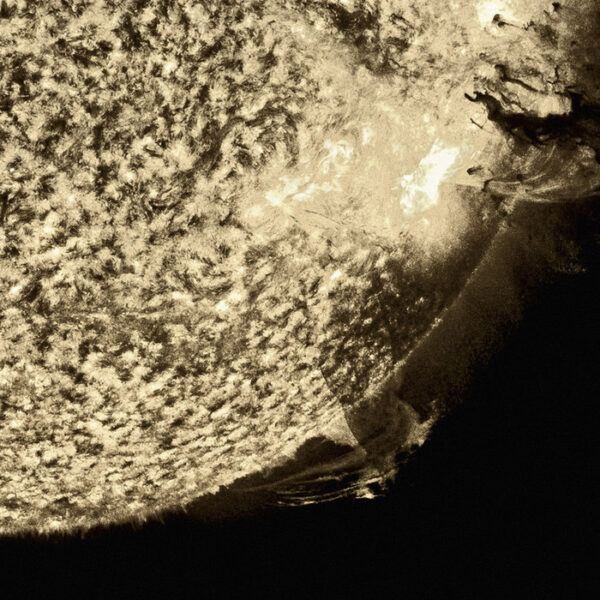 At just over 35 minutes in length, how does a short recording like this recent album capture the immense magnificence and sheer scale of such a topic as the birth, life and death of a supernova? If your name is Roly Porter, you use the topic to explore what it means to be alive as a human, to be a tiny and insignificant speck living in a massive universe where such phenomena can exist yet experience the same life cycle as you do.

The music is split into five tracks that trace the upward trajectory from disorganised helium cloud into concentrated masses of cloud that soon reach critical mass and begin to draw other particles into them. Masses take on definite form and substance, generating internal heat, gravity and other forces, and from there evolution and growth begin and accelerate. The album gets off to a brisk start and rarely lingers for long on sounds, melodies, rhythm structures and tone wash for their own sake. There is plenty of dark void in and around the sounds, suggesting the vastness of space and our own lonely condition on a tiny blue planet in a small star system. The music combines elements from industrial, dubstep, formal acoustic composition, symphonic music and dark ambient.

For all the solemn beauty that passes our ears though, there’s something rather too controlled, steady and unemotional about the music – it’s very grand but it evokes no sense of wonder or drama in the way that the music selected by Stanley Kubrick for his sci-fi masterpiece flick “2001: A Space Odyssey” does. True, the clever director chose a wide range of music and musical styles, some stretching as far back as the mid-1800s, to emphasise the visual action or vistas portrayed – and that in itself points to a problem with Porter’s work: for much of the recording, there’s no sense here that he was reaching for the utmost in the genres of music he chose to work in for this album, no sense of risk or exploration. Only with the final track “Giant” do we arrive at a state of terror and awe as the star in question achieves super-giant status and engulfs some of its inner planets but the musical drama only goes so far. We are not even allowed to hear and visualise the star’s full glory and extent as it reaches its maximum size and development just before it begins to collapse in on itself.

It’s a beautiful work, grand in its own way, yet in my view not quite reaching the heights and depths that beckoned. Perhaps if Porter had extended his vision of the star’s life cycle to include its inevitable descent and death, a connection between the most incredible physical phenomenon and our own lives would have been established, and we humans would find comfort in knowing that even the mightiest things to exist must eventually die. Something really grand, intense and quite emotional could come out of that.