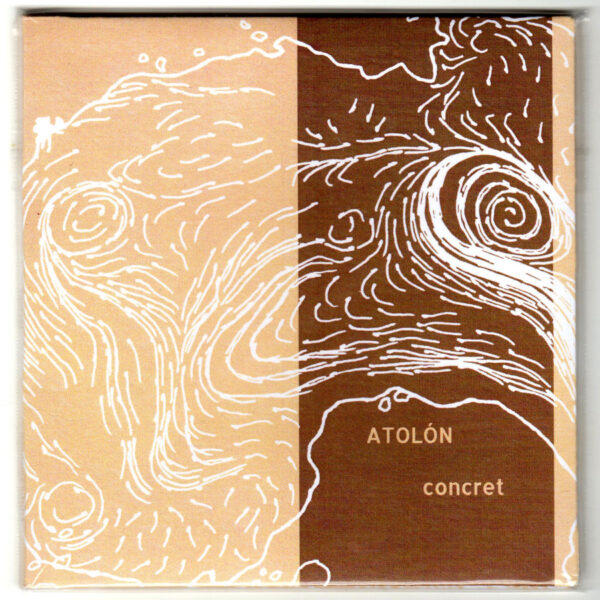 Recorded by Simon Reynell who is perhaps more widely known as the man behind the UK’s Another Timbre label. A sound recordist by trade, I believe he is also responsible for engineering most if not all the live recordings released on his excellent Sheffield-based imprint. Concret is a very fluid 34 minute improvisation by Ruth Barberán, Ferran Fages and Alfredo Costa Monteiro. I’m interested to see Ferran Fages’ name here as I have very much enjoyed his solo guitar improvisations and his collaborations with the zither player Dimitra Lazaridou-Chatzigoga under the name Ap’strophe.

The linear sleeve design by Alfredo Costa Monteiro is carried on to the front of the disc itself (and on a loose card insert), and in a way reminds me of the work of Savage Pencil’s work for vinyl, particularly the scraffito style design he did on the surface of the b-side of Lee Ranaldo’s solo lp From Here To Infinity… In fact the gatefold sleeve itself is nicely designed; a die cut, stylised man on the interior fold and the subdued palette of the two-colour printing process; the whole package finished in its own tailor-made resealable transparent polythene sleeve.

The music on Concret is very low-key. Barberan, Fages and Monteiro are in no hurry, but you get the sense that no amount of time or indeed hard disk space (I was going to say “tape”) is wasted either.

But this is no back-slapping, self-congratulatory exercise in ego-hugging. Nor is it hesitant or sloppily experimental – every technique used is a well-honed skill presented with the appropriate level of mastery. Furthermore, I can honestly say this is one of the most stripped down and astringent expressions of emotion I’ve ever heard in the electro-acoustic improv canon. This trio spit out their bile in one bitter amorphous lump; their quivering, caustic version of improvisation threatening to eat a hole in the floor.

Like many of the current investigative sound-makers whose names I could invoke to offer some sort of context (Lee Patterson, Jason Kahn, Choi Joonyong, Burkhard Beins) as a group, ATOLÓN determine to ruthlessly prise every last unlikely sound and utterance from their respective choice of instrumentation. Dynamically, the single 34 minute piece covers a lot of ground; each instrument is allowed to take precedent in turn, and the feeling of a tight live unit performing at the edges of their abilities is almost tangible. Around the halfway point, they have reduced their playing almost to the minimal/automatic nature of a Max Eastley wind sculpture, momentarily; and then an unsuspected crescendo of juddering, distressed, slowly fracturing incandescence for the listener to come to terms with. And like all the best examples of eai, it demands your full attention. Not for the faint-hearted or listeners new to this kind of music, perhaps, but if given the level of concentration it deserves, guaranteed to deliver the goods.
Mixed and mastered by Ferran Fages, and mastered by Ilia Belorukov (of grindcore experimentalists Wozzeck, interestingly) and Mikhail Ershov released in unknown quantity but judging from the type and quality of the package, there can’t be huge numbers of this item around so I’d hurry to obtain a copy if I were you.