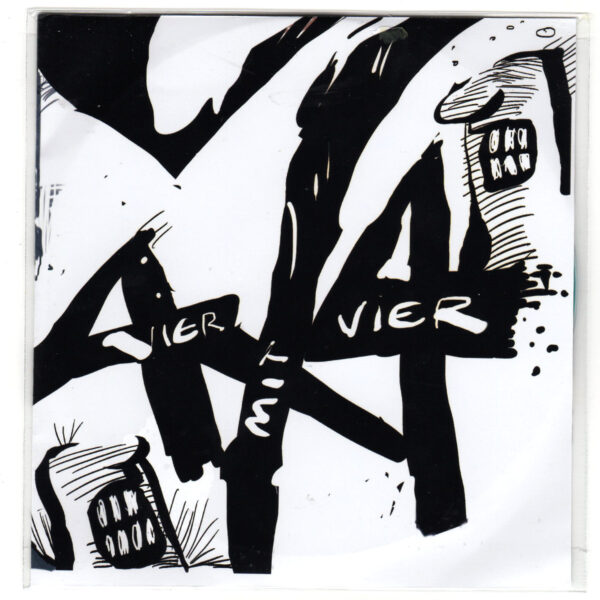 From Carlin How in North Yorkshire we have split CDR Vier Mit Vier (ELM LODGE RECORDS 012a), with four tracks each by Forkeyes and Marcus HP Davis 1. They both decided to give the release a title that fits the “German 70s experimental music” vibe which they happen to have alighted on. Many aspire to imitate the holy grail of kosmische and krautrock these days, which has resulted in a lot of name-checking and bad music in recent years, but in this case we have an exception. The stuff by Forkeyes is actually quite appealing – retro-styled rock music with guitars, bass, drums and keyboards with that rough-hewn rehearsal studio sound, enhanced by very little in the way of processing. Forkeyes plays with some guts and passion and does indeed turn in a creditable emulation of the Neu! template, inflected with a certain amount of no-nonsense Englishness, although without much of the trippiness or psychotic dementia we might have otherwise hoped for. I particularly like his tracks ‘Whaletrash’ and ‘Noy’ for their adherence to these vaguely 1970s stylings, while ‘Wild Wooley War’ attempts to incorporate more modern sequenced elements and disco beats (as I call them), overcrowding the sound somewhat. Even so, full marks for energetic bouncing-about and making music that sounds like fun. Forkeyes is Mike Bryson, who used to be a member of Bogshed – Hebden’s finest, a personal favourite of mine from the mid-1980s and a band who stayed far truer to the spirit of The Magic Band than the much-vaunted Stump. Plus they had a great sense of humour. Bryson’s also a cartoonist (published in Private Eye) and may have supplied the quirky cover art, including the drawing of two ugly giants lifting up the side of a house (or is it a gigantic music centre?)

If Forkeyes is a cocktail of Neu!’s rhythms and the thuggery of Guru Guru mixed with the melodic guitar work of prog giants like Steve Howe, then I don’t know how to characterise Marcus HP Davis 1, a musical jackdaw who has a considerable number of trinkets stowed in his nest. On ‘Slacker bidder overlord’ he’s put all the rock music elements through a mincing machine and stirs them liberally into a swirling casserole, whose rhythms and general lack of centre owes much to Acid House of the 1980s 1. ‘Rheintum Earbuzz’ time-warps Delia Derbyshire melodies through a slightly bleak wasteland of synth drones and processed guitar stabs. ‘Life in the wrong lane’ is even more of a mish-mash, attempting to reference Kraftwerk’s Autobahn with its flute samples while applying them to rhythm tracks that don’t quite match up; in his brave genre-crossing effort, the composer forgot to include things like ideas, coherence, or a melody. Of the pair, Marcus appears to be more the studio-bound musician, with his layers and mixings, compared to the lively Forkeyes who has an exciting real-time sound in all his recordings, even when he’s playing everything himself by overdubbing. Perhaps not essential, but this is an unusual slice of English underground music, parts of which have attracted notice on Radio 1 and in the pages of The Wire. From 02/11/2012.