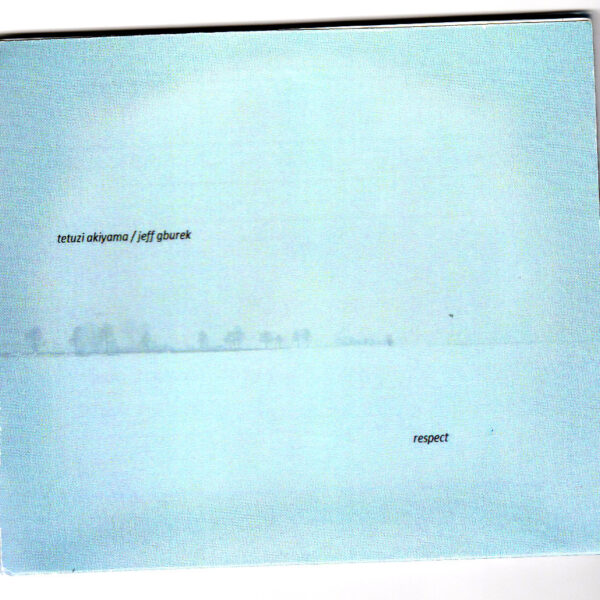 Precision and restraint are the watchwords for this beguiling release, which teams Japanese guitar guru Tetuzi Akiyama with Polish-American improviser Jeff Gburek for a quartet of long, contemplative duets recorded in 2010 and inspired – perhaps counterintuitively, given the chilly cover art of the CD – by the empty deserts of New Mexico.

Both players are veterans of these types of meetings, and this experience is what makes the record so enjoyable. There’s no showing off or attempting to dominate. Instead collaboration and the exchange of ideas predominate.

Gorgeous and hypnotic, the four pieces have an arresting sense of space and stillness, emphasised by the way in which the two players’ contributions weave and mesh together together, resulting gauzy films of abstract sound. The six and a half minutes of “Respect 4” are a fine example, Akiyama’s broken chords hanging luminously in the air like wire wool as Gburek subtly brings in a whining, fuzzy drone of feedback that swoops around and then enfolds them, as if wrapping them in a warm blanket.

Akiyama focuses exclusively on acoustic guitar throughout, playing with a glacial stillness that demonstrates his expertise in improvising groups small and large. Since forging his improvisational chops in the Madhar group in the late 80’s, he ran a monthly improv session with no-input mixing board maestro Toshimaru Nakamura in the 90s, has played in a duo with Hervé Boghossian since 2006, all the while amassing a comprehensive discography of solo, duo and larger group recordings with all manner of players.

His finesse is demonstrated perfectly in “Respect 3”. On this piece – which, perhaps appropriately my CD player seems to think is the first track on the album – we get a full 30 seconds of silence before Akiyama starts, plucking pinched harmonics followed by a glisteningly melodic line that appears on the horizon, like an iceberg in a freezing sea.

Throughout this fine, meditative record, every note, chord or harmonic Akiyama plays is perfectly placed – not only in relation to the other notes he plays, but also to the space and silence surrounding him. Perhaps this is why the album’s release notes talk about its ‘post-Feldman’ quality…

Gburek, in comparison, brings everything but the kitchen sink, mobilising slide, acoustic and prepared guitar and a raft of unidentified electronics to play with. He’s a well-regarded musician and composer in his own right, who has worked with Keith Rowe, Tom Carter from Charalambides, Eddie Prevost and many other experimentalists.

He dips into his bag of tricks sparingly, though, offsetting his partner’s contributions to great effect. The insistent, Morse-code like tones at the start of “Respect 4” ,for example, anchor Akiyama’s frail guitar melodies perfectly. Midway through “Respect 2”, he plays a high, keening melody, possibly on prepared guitar, making a sound somewhere between a Theremin and pedal steel guitar that curls around the space in a peculiarly feline way. Elsewhere, low rumbles, creaks and chimes bring ghostly touches of colour and texture.

In fact, the more I listen to this album, the more I’m convinced that Gburek brings a fantastically unconventional structure to these pieces. His interventions often blindside the listener, reconfiguring a track in unexpected ways. One-and-half minutes into the pristine quietude of “Respect 2”, a burst of white noise erupts, shattering the calm, followed by a clamour of recorded voices, in French and Polish. It’s as if someone has walked into the recording studio and switched on the radio. It’s weird, but it works.

Then, in “Respect 4”, following a particularly limpid section of guitar and electronics, Gburek unexpectedly summons up a sinister, bruised wave of sound which obliterates everything else. It then dissipates as quickly as it appeared, leaving Akiyama to pluck enigmatic droplets of guitar that shine in the now-empty space.
It might be easy, given all of this stillness and restraint, to fall back on some hackneyed guff about the intrinsically calm and meditative nature of Japanese art. To be sure, this album does have a scent of the Onkyokei about it (although Akiyama is quite capable of playing loud and visceral too, as anyone who heard his playing on 2012’s Satanic Abandoned Rock & Roll Society record, Bloody Imagination will testify.

But more importantly this is a collaboration, not a solo record, one which takes its cue from the wide open, empty sky of the southwest USA, not the Off Site venue in Tokyo. Its distinctive character comes from the inspiration of this landscape, moulded and formed by both Akiyama’s Japanese and Gburek’s Polish-American sensibilities.

In fact this record actually recalls some of Manfred Eicher’s poised productions for ECM. Perhaps this is a more adventurous, abstract and dissonant ECM record than that label is accustomed to, true. And maybe the icy European landscape on the CD case recalls ECM’s distinctive aesthetic more than I should allow it to. But still, there’s a shared sense of the possibilities of space and the calm intimacy of the recording that unites the Munich-based label and this mesmeric album.