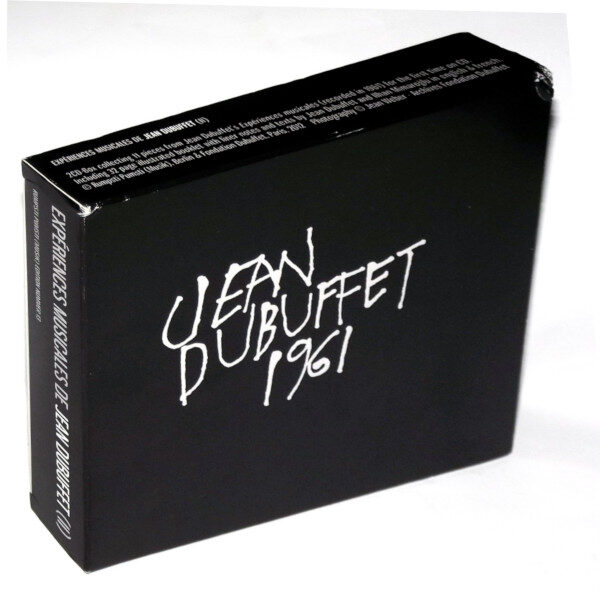 Long overdue notice for this fine double-CD set of the strange music of Jean Dubuffet which we’ve had here in the boxes since late 2012. If you’re keen on the visual arts then chances are you’ll have heard of Dubuffet as an early champion of what has since come to be called “outsider art”. Along with Ernst, Klee and others he was among the first 20th century artist to take note of pictures produced in insane asylums (which had probably been ignored or dismissed by society), but more to the point he developed a very convincing and passionate aesthetic in support of what he called “Art Brut”. I recall when I first read one of his essays on the subject, and I must have experienced some sort of epiphany. He was proposing a radical rethink, not only of our art-appreciation senses, but of the very meaning of humanity, society, and the purpose of art within it. I’ve always admired Dubuffet’s no-nonsense “all or nothing” stance on this matter; likewise his own impasto paintings, which were almost visual manifestations of his polemic, powerful and burning images that cut directly to the heart of the brain in highly forceful ways. A lot of people probably thought he was embracing ugliness for the sake of it, as part of a concerted post-war effort to overthrow everything we knew about conventional beauty. The truth is he was trying to reconnect us all to our own human-ness in the most direct and primal manner possible. It’s not too far-fetched to consider that Dubuffet’s aesthetic was paving the way for Captain Beefheart, Sun Ra, Albert Ayler, The Residents, and any number of our favourite outsider / self-taught / naive musicians.

Dubuffet clearly applied this very direct attitude to everything he did in his art and his life, if this record is anything to go by. Everything here was recorded over some months around 1960-1961, which means that th’ Buffster would’ve been about 60 years old at the time – his fiery passion for raw innovation and experimentation still undimmed. He did it with the help of his friend, the painter Asger Jorn, who in fact initiated the sessions of improvised music round at his house. Both the act of creating the music, and capturing it on a tape recorder, were approached in Dubuffet’s very hands-on style, just wading in there and doing it. They weren’t absolute amateurs, it seems, and the notes here reveal that Jorn was fairly well practiced with the violin and trumpet, and Dubuffet was calling on his childhood piano lessons to stand him in good stead on the near-defunct piano they were using. Out of tune and in need of repair, this old keyboard clearly fit the bill for the plan. They both instinctively knew these sessions were not about “virtuosity”, and they scurried off in pursuit of liberated and weird sounds. They used acoustic instruments – piano, cello, trumpet and recorder, then gradually added other instruments with which they weren’t familiar, including obscure and outmoded devices, folk instruments, and ethnic instruments. Easy enough to observe some parallels with Sun Ra and his Strange Strings experiments here, and I expect I’m not the first glib pundit to have done so…At the same time, Dubuffet makes it clear that he had zero knowledge of modern composition, nor what would come in time to be called “free improvisation”. Part of the art brut deal is remaining “untainted” by too much cultural knowledge, which is why shut-ins and introverts do it so well.

The tape recordings themselves were also primitive and amateurish. Dubuffet did them himself, using non-professional equipment, and freely admits he had no idea about “correct” microphone placement. As such, he embraced accidents and welcomed the grunginess of bad reproduction. He was often delighted when the machine played back odd sounds that he hadn’t intended to record. And he developed a crude editing method using scissors and tape, and extremely limited playback facilities; which in turn evolved into an even cruder overdubbing technique of some sort, allowing him to record multiple instances of his instruments and become an “art brut” version of a one-man band. Later he kinda admitted defeat and added a second tape recorder and a mixing desk to this set-up, but the point is valid. Dubuffet was busy inventing lo-fi on his own terms in 1961. “All spheres of the arts could benefit from using simpler techniques,” he states with conviction. “I also believe that art does not need to be refined. I am all for wild and unaffected charms rather than frills and furbelows.”

The music you hear has plenty of wild charms…but look at the photographs by Jean Weber reprinted in the booklet here, apparently 1 showing the creator at work blowing trumpets, bassoons, horns, wielding a violin bow in unconventional manner, and pursuing the craft of generating his unusual sounds. What I like here is that Dubuffet is impeccably dressed throughout, with his cardigan buttoned, his tie neatly drawn up against his white collar, and his trousers newly-pressed with razor-sharp creases (and look at those great turn-ups!). At all times, his face bears the mark of a creator taking the work absolutely seriously. 2. It adds quite a lot to the experience looking at these images of poise, grace and sartorial elegance while listening to the music on the discs, all of which is completely loopy.

This particular release compliments the 1991 CD released on the French Circé label in 1991, and reissued on the Mandala label in 1996. But that contained only nine of the 20 pieces originally recorded; here are the remaining eleven cuts. Before this, there was a 1973 release by Ilhan Mimaroglu on his Finnadar label, although the music was originally released in 1961 as an art edition of 60 copies, pressed on six 10-inch vinyl LPs.