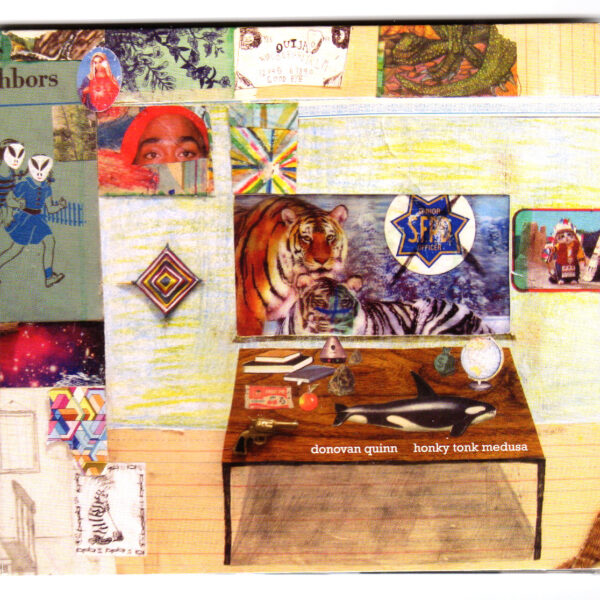 The title of this album, the third solo full-lengther from Donovan Quinn since he left The Skygreen Leopards, suggests this work is going to feature light and dark in equal amounts. Certainly the tone throughout hints at melancholy and a slight sense of foreboding on what would otherwise be sunny and bright folk pop songs. There may be a theme dwelling on aspects of modern life in a post-industrial world where the American Dream is proving to be more nightmare than dream and people must struggle just to keep sane coping with the pressures of daily living.

The songs all have quite a distinct flavour though I can detect the influence of Bob Dylan in Quinn’s style of singing. (I’m not familiar with the history of American folk music from the 1960s on so readers will have to forgive me for my sketchy knowledge.) “Night Shift” is an early highlight for its deep droning near-industrial rhythms and the use of spoken word recordings in the background that reference the busyness of modern urban life. “My Wife” is a dream-like wistful piece, forlorn and sounding a bit nostalgic in its mood, with a sinister darkness at its core. (The song references the Who song of the same name and David Lynch’s TV series “Twin Peaks”.) “Dying City” comes across as a gentle, sorrowful elegy. “Love in an Evil World” is the most poppy-sounding track with its catchy melodies, slow though they are, and its unexpected twists that capture perfectly a sense of uncertainty and passive acceptance of whatever hardships may come.

The music can be challenging in its ambiguity and its attitude of seeming resignation and observational distance. Although Quinn is a good song-writer, there is something lacking in these songs: they seem so introspective that they don’t reach out to their audience and the listener must try to find a way into Quinn’s world and concerns. Of course, whether Quinn is interested in making a direct emotional connection with his audience is another thing; he’d certainly sell more records and become famous but he may not want the attention, expectations and pressures that fame would bring. Honky Tonk Medusa is a very unassuming little gem of bittersweet quality that with time may gather its own small group of devoted fans.