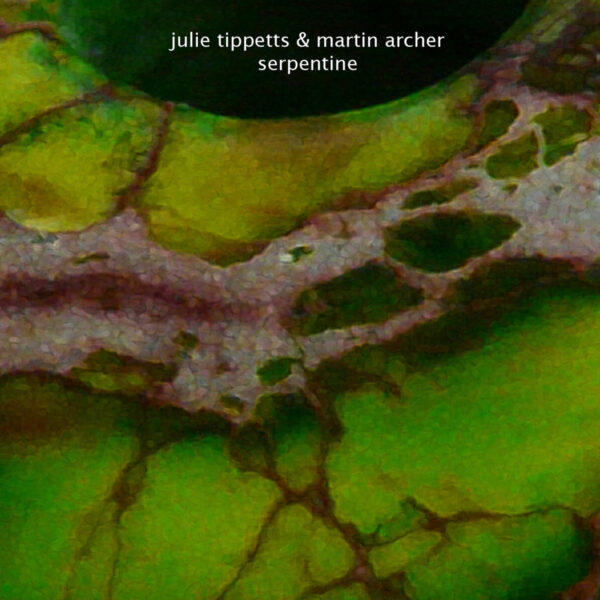 Prior to hearing this album, I knew of Julie Tippetts only via her past association with husband Keith Tippett’s seminal 1970s Centipede project. (Confusingly, she uses what is the original spelling of Tippett’s name.) I hadn’t realised she was also the Julie Driscoll who, under that maiden-name, had hits in the 1960s, notably a cover of Bob Dylan’s “Wheels on Fire”. Indeed, Tippetts’ biography has a certain fascination in its own right, with connections to luminaries Robert Wyatt and Carla Bley, giants of experimental vocal work like Phil Minton and Maggie Nichols, and even to Rod Stewart, Micky Dolenz and comedian Ade Edmondson. Archer‘s own tastes are similarly catholic; drawing from an original involvement in Free Jazz through to later experimentation with synthesisers and electronics, vocal music, and even Punk. His own Discus label links him directly with mainstays of the improv scene, such as Chris Cutler, Mick Beck, Charlie Collins and Paul Hession. Tippetts and Archer
began their formal association in 2001, working with writer Geraldine Monk on the album Angel High Wires. Since then, there has been a steady stream of releases by the two, the latest being this one, 2012’s Serpentine.

With that title strongly to the fore, the aquatic symbolism runs deep here, and most everything about this album coheres to the submarine. There are watery expositions on rivers and rain, on aquatic animals – both actual and imagined – and much oozing, pumping, drowning and such. The prose is weighted in this way towards passages of intricate cinematic description, sometimes ethereal in tone, sometimes more stridently delivered, even frightening so, and on occasion tough-sounding; with the narrative itself characteristically assuming a gothic, lost in the forest wide-eyed Alice feel, once or twice a little purple at the edges. Tippetts has a truly rich, versatile voice, and is able to effortlessly flit between the soulful and the gospel-esque, onto staccato scat and spooky spoken word. The same liking for imagery, theatricality and melodrama is carried through into her scant instrumentation; which includes such a thing as an amplified doll’s house.

Archer and a small band of guest musicians handle the bulk of the music; offering a wide-range of moods and attitudes. I hear shades of Portishead and Broadcast; at times, I was put in mind of things like “Horse Latitudes” by The Doors. There are, too, arresting flashes of squonky sax, perhaps nearest to John Surman, as well as Fusion-esque guitar, a few hints at Rockabilly and Dub, some Indie Rock stylings. Such grooves strategically and intelligently punctuate Tippetts’ introspection, offering sites of tension and release, adding to the drama. Archer’s studio-craft is superb throughout.

The overall effect for this listener is of a kind of drowse in the very best sense. The work as a totality is successfully immersive, dense, contemplative; one is invited into a discrete, private world, both lyrically and in terms of its soundcapes. Tippetts and Archer have, of course, a laudable, hard-won wealth of experience to pull upon between them. This isn’t the Scott Walker of Tilt through to Bish Bosch, nor is it the David Sylvian of Manafon. But it likely comes from something of the same place, in wrestling with the self-same compositional, in fact generational and psychological, challenge of how to make, as it were, grown-up Pop music. The intentioned avant-gardism of Walker is truly out there, of course; and thus in that sense it is effectively delimited. Tippetts and Archer tread a finer line in patronising the song-form more keenly, and this results in something like where Pop could have ended up if the commitment to progress and experimentation hadn’t been abandoned. A follow-up, Vestigium, is to be released later this year.