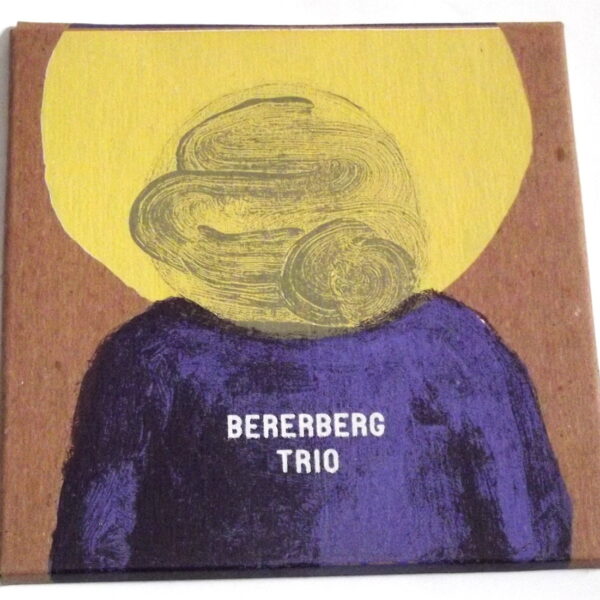 Feel Beetrr (VETO-RECORDS / EXCHANGE 007) is the latest item from Swiss reedman Christoph Erb and his Veto-Records label, where he’s horning it large with his bass clarinet and tenor as one third of the Bererberg Trio with the Chicago players Josh Berman on cornet and Fred Lonberg-Holm on cello. Ah, no percussion. I’m often very partial to music in the free jazz or improv idioms where there’s no drummer involved; somehow it seems to make the players more comfortable, as regards volume, dynamics, and tempo. The combination of brass, woodwinds and cello continues to create pleasing tastes for the hungry listener who’s tiring of endless corned beef sandwiches or deep-dish pizza, and wants the chance to savour a spot of raw sushi or avant-garde petit-fours wrapped with a mild form of plastic explosive instead of the conventional marzipan. The brew is livened considerably when Fred plays his electric guitar instead of the usual cello on some tracks; it’s especially interesting when he tries to match the plangent tones from the blowing part of the act through means of sustained, bended notes from his Gibson Flying V, until he decides to roughen up the surface with a touch of crazy-paving scrabble-mode riffing. Natch, Erb and Lonberg-Holm are highly familiar to us in these here parts, for example as the duo Screw & Straw or as half of the quartet Sack. Arrived 23 May 2013.

It’s possible at one level to enjoy a record like Feel Beetrr simply as a perfect combination of great sounds from well-played instruments – each player giving unique voice to their chosen “fifth limb”, as most musicians refer to the device that plagues their life so much. We might consider the same line of thought with Le Jardin Bizarre (AN’ARCHIVES AN’06), which features the French guitarist Michel Henritzi pairing his lapsteel and electric guitars along with the violins – both amplified and acoustic – of Japanese wizard Fukuoka Rinji. It’s a beautiful but sad record. Henritzi has long dwelt in melancholic, rain-sodden musical terrains; it’s as though his musical life were a Kurosawa movie. Some of his solo guitar records have more minor keys than the whole of Asia Minor, whatever the heck that means. For the most part here though he is content to provide a strumming / chord backdrop to the keening violin work of Fukuoka Rinji, who effectively captures and distils the voice of a thousand wailing tree spirits in each note produced by his ethereal digits. I often imagine him as a fragile man whose bones are made from brittle clay pipes rather than calcium, and that his flesh would crumple into grey dust if you so much as blew him a kiss. The merest touch of studio echo is added to the record to enhance the overall ambience of the recording, resulting in a very effective portrait of this “strange garden”, subtitled “a garrulous 6 pieces for night garden suite”. Indeed, night bloomers such as the Casablanca Lily and Night Gladiolus would be what I would expect to find in my imaginary time-lapse documentary film that I’m mentally playing as I spin this superbly morose and plangent record. I’m also imagining a picture book by Edward Gorey that was never drawn nor published, but he would have been an exceptionally suitable candidate for delineating this night garden using his dark cross-hatching nib and jet-black ink. Poetic track titles, and equally lyrical artwork – uncredited, but probably screenprinted by Alan Sherry of Siwa Records – complete this delicate hymn to the ipomoea and oenothera biennis. Rinji was the founder of the psychedelic rock band Overhang Party and his wiry, minimal work has graced collaborations with Sachiko and Chie Mukai; he last played with Henritzi on the 2011 PSF release, Outside Darkness. From 16 May 2013.

Another item themed on the idea of “night”, and very coincidentally featuring a Japanese artist is the delightful album The Illuminated Nightingale (NOBLE RECORDS NBL-209) by Motoomi Doi from Osaka. Apparently, he regards this as his first proper album, unless you count his two previous private press releases. One of them, N-N-N, was only available if you sent an email to Motoomi and asked him for a copy; later on, you’d get a parcel in the post. It’s his way of subverting the idea of the free digital download by restoring a tangible product to the equation. The present item comprises ten bouncy songs of electropop with plenty of drum-machine beats, poppy Casio-type melodies played by very busy fingers, and above all the delicate wispy soprano voice of Motoomi himself. He delivers his lyrics with an unaffected simplicity, and great gentleness; for the listener, it’s like being caressed by a large pink marshmallow. There’s also the impression one has of bittersweet emotions; the album is neither really happy nor sad, but floating midstream like a little cork boat on the river. Even the more upbeat songs contain a hint of imminent disappointment, an awareness that the party you’re enjoying so much now will be over the next day. I’m guessing when I say this of course, since it seems all the lyrics are sung in Japanese, but the stated intention is to “portray an entire evening from dusk to dawn” in song, and to allow the listener to “wander through a world where fantasy and reality co-exist…what kind of view will we see from this place where night calls out its end?” Melodic, lyrical, inventive.