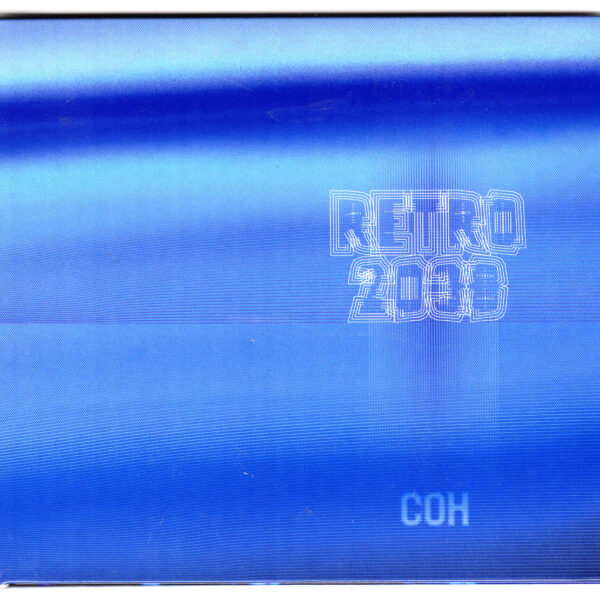 Retro 2038 (EDITIONS MEGO 172) from COH is Ivan Pavlov’s immaculate album of futuristic disco-tech minimalism from the later 21st-century or some such…he probably did it using time-travel methods, while also harking back with a fond eye to retro and vintage modes of pulsation and boundage techno music, about which I am ill-informed…one would have to imagine a blueprint or schematic form of graphical score for a super-imaginary work that balances perfectly astride the entire Kraftwerk-Moroder axis, albeit reduced and stripped down so that only small, atomic-sized particles remain for digestion by the hungry biscuit-muncher. I was on safer ground with 2010’s IIRON from this guy, as that was more of a noisy guitar album in the area of intellectual heavy metal. But I can see this well-produced and finely polished set insinuating its way into my system, by dint of its smooth surfaces and inhumanly clean sounds, propelled by crisp and crunchy mini-beats. “Contains no instrument samples, patches or other additives”, is the proud boast of Pavlov as he brands his work “100% home-made computer sound”, almost as if it were a product from the supermarket. From May 2013.

Minimetal are a rum duo of Swiss guys who perform on stage as a guitar-and-drum duo, apparently wearing top hats and tuxedos while doing so. They’ve gotten into music from a background in the visual arts – design, sculpture and painting, so right away one can’t help but wonder if there’s a performance-art slant to their act. Apparently they formed in 1994, and were fans of Kyuss and other stoner / rock bands of that period…they only wrote 11 songs, and their entire act consists of repeating this slightly limited repertoire to anyone who will listen. On one level they might be accused of starting off as a parody and have now evolved to the point where they’re parodying themselves, but I think there’s likely to be more going on under the surface. The songs on this record are genuinely strong examples of mesmerising and compelling rock, but they’re also performed with a precision and attention to detail which you won’t find in the music of 90% of sloppy west coast slacker bands of the 1990s. Even the vocals are a spot-on impersonation of that throaty American grunty style of singing; you might have to pause to remind yourself that they’re actually European musicians. At no time though is there any sense that Minimetal are mocking the genre, its musicians, fans, or audiences, and Never Hang Around (SPEZIAL MATERIAL SM043CD023) is a thoroughly enjoyable listen of ultra-steady rock rhythms, precision-tooled riffing and relentless syncopation. I suppose the anomalous factor is that they perform this set in art galleries rather than rock venues, but there’s nothing especially odd about that – after all how many New Wave and noise bands have performed at London’s ICA? The top hat and tuxedo gimmick might be read as a nod in the direction of The Residents, but I think it’s more likely to be another carefully-planned gesture of irony; choosing costumes that are uncomfortable and well-groomed in order to position themselves as the diametric opposite of the grunge and stoner “style”, with its comfortable leisure wear, trainers and denims, and loose sweatshirts worn over t-shirts. From 7th May 2013.

Drums and guitar are utilised in a quite different mode by Glockenspiel on their Dupleix (BABEL LABEL BVOR12108) album. The duo of Adrian Dollemore and Steve d’Enton emerge from a background in UK improvisation, and are now cocooning out of that shell into a species of ambient beat-driven jazz drone, played with Dollemore’s diffused and effects-laden guitar and d’Enton’s rather languid beats. Not unpleasant, but much of the music is a bit too smooth and cosy for me, with the exception of ‘Bellville’ which has a lot more in the way of ragged edges, discordant notes, and fire in the guts; moments of ‘Fentanyl’ work in this way too, disrupting the otherwise rather polite tone of the album. One slight reservation one might express is how dated this approach to making music seems now; Dupleix could have been made in 1996, and its aspirations towards Sonic Youth, Krautrock, and ambient music feel a bit tired and unengaging. From 13 May 2013.

Mutatis Mobilis (ATTENUATION CIRCUIT ACR 1028) is a fine item by the great Freiband (i.e. Frans de Waard), sent to us in May 2013 from this Germal label who do package their droney output in some fine tactile plastic lunchboxes for our delectation. I suppose there are two main characteristics to note with Mutatis Mobilis – its interactiveness, and its extremely recycled nature. As to the interactive dimension, Frans has timed and edited these two suites of ultra-processed drone so that they last precisely the same length; the listener is invited to open both tracks on the computer, using a suitable audio program, so that they can be played back and listened to simultaneously. And even remixed in real time, if the user entertains such proclivities. I haven’t yet tried it myself, but I expect Audacity would do the job effectively, and it’s an open source program which I recommend. However, with this release De Waard is trying to move away from strictly “digital” methods and is harking back to the 1980s when TEAC four-track machines enabled the bold experimenter to do amazing things on cassette tapes with overdubs, mixage, and bouncing-down. Matter of fact the label also released this album as a cassette (15 copies only, though) in hopes that owners of original Portastudios could get stuck in. As to the recycling element, Mutatis Mobilis uses source material created by Freiband blended with other source material from the album Mutatis Mutandis by Aalfang mit Pferdekopf, which itself was created out of sound samples provided by Freiband. This collaborative “reprocess my stuff, dude” spirit seems to be one of the mainstays of 1980s experimentation (I was just mentioning it the other day in reference to P16.D4), and Freiband are clearly steeped in that work ethic. With the multiple configurations and reconfigurations of material that are taking place here, further compounded by the possibilities that we might introduce if we open up this CD in Audacity, Mutatis Mobilis is clearly a work that is never actually “completed” in the ordinary sense of the term. From 20 May 2013.