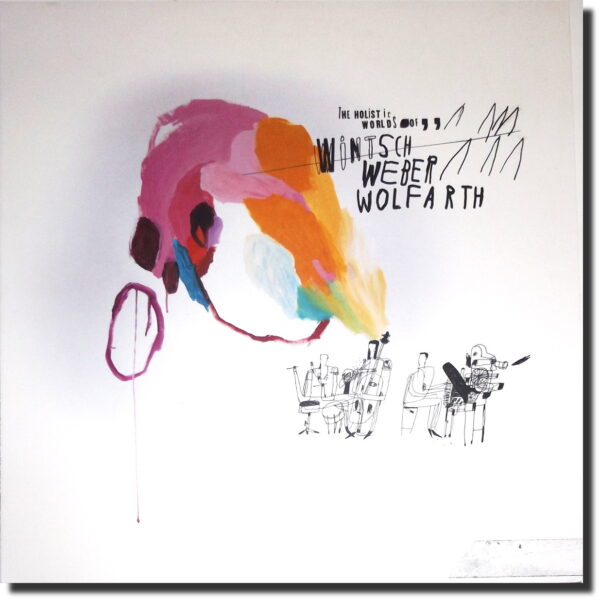 Space, its acoustics and landscapes are foregrounded in this striking, improvised set by Swiss ‘jazz’ trio of Michel Wintsch (piano, synth), Christian Weber (double bass) and Christian Wolfarth (drums). Probable cause is provided: most titles reflecting at least nominal inspiration from the cosmological legends of El Sonny Ra, and the musicians – while not directly influenced – demonstrate a singular self-possession while stood amidst architectural ruins of mysterious provenance.

The Holistic Worlds is the trio’s second recording (of, at present, three), recorded once again in their home country (they appear unwilling to record elsewhere), where they comport themselves with the precision of a compatriot timepiece’s rotating innards (though never sounding mechanical), while entrancedly attracting planetary influences from the likes of those inhabited by the likes of Supersilent, Gruppo di Improvvisazione Nuova Consonanza and the aforementioned Saturnian emigrant. And while this isn’t to suggest we’re dealing with a tribute project, astral allusions to the great jazz satellite are nonetheless audible, be it in the garbled, synth-gilding around Wintsch’s oblique piano lines in ‘Singin’ Joe’, or in those of the ‘Mercury Tears’: an impressionistic rendering of gently cascading water that Debussy mightn’t have frowned upon. And then there are the amorphous, alien vistas akin to those beamed in on treasured recordings such as Nothing Is and The Heliocentric Worlds (the ostensible inspiration for the current album title), which are orchestrated via astringent plains of plucked piano strings, Wolfarth’s crisp, jagged drum rolls somehow both frenetic and absent, and all illuminated by solar swells of Wintsch’s synthesizer, which he seems to be playing in tandem with the ivories.

While he overshadows no one, I must confess a predilection for Weber’s stark alphabet of extended techniques for double bass, primarily for having witnessed an intense, distilled recital at a Schimpfluch showcase a couple of years ago. Though taxing for those concentrating, his inspiration and perspicacity were nonetheless remarkable, and here are perhaps better served by the complimentary company he keeps. I’m certainly grateful for the benefit of a chair this time, from which I enjoy the group’s patient structural development as it unfolds naturally into quite unnatural formations without hint of haste. The trio has since recorded again, at Willisau Jazz Festival (hatOLOGY 725, 2013), further indicating preference for home ground. Having enjoyed the material here, I should be interested in acquainting myself with the subsequent steps they’ve made.