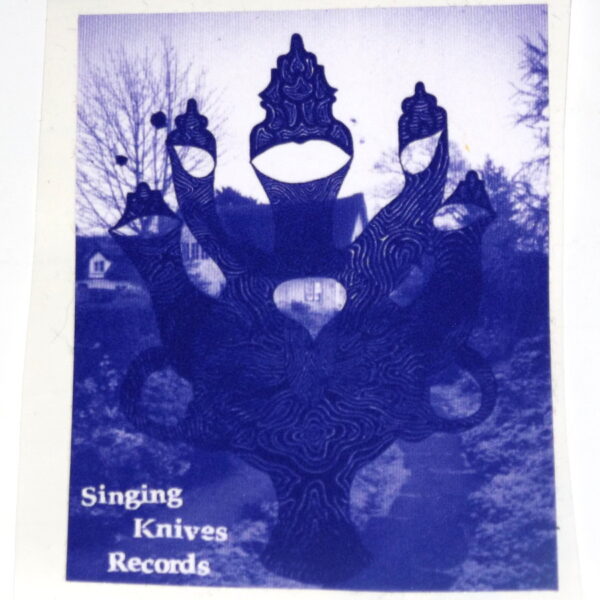 Curious bundle of curios from Singing Knives Records…they are a Sheffield label doing many exciting things, including organising events and musical happenings…one such is documented on The Wet Black Poodle Transforms (SK019), a deliciously weird thing in a tasty foldout poster printed in green and black. It’s a showcase for Ludo Mich, a performance artist and film-maker from the Netherlands, who turned up in the north of England in 2011 for a few dates. He was accompanied by Syed Kamran Ali from Harrapian Night Recordings, whose album The Glorious Gongs Of Hainuwele still causes night sweats when I listen to it, or even think about it. Completing the trio was Pascal Nichols, from Part Wild Horses Mane on Both Sides. The resultant meeting of minds is an exciting yet chilling episode in dark experimental mayhem…Ludo Mich growls and howls like a wounded woolly mammoth, while around him an explosion of percussion builds into an intricate forest, the entire absurdist mess growing into even more unpredictable thorns and brambles. The palpable feeling is that we’re witnessing entertainment from another world, possibly Saturn or Pluto, an effect which is greatly increased by the dank and grisly echo which drenches both of the sets (Manchester and Sheffield), which may have been produced electronically but I would prefer to hope it’s because the trio of insane wildies were performing in cavernous, underground lairs, performing for the cognoscenti alone, far from the prying eyes of hipsters, thrill seekers, and superficial magazine editors. Great!

Also in the envelope, a cassette by Human Heads called The Beauticinist (SK020). This oddity yields none of its secrets, and it’s only guesswork and an image from the label website that leads me to imagine Human Heads are a duo, when in fact all we know is that someone named Ben Morris did the mastering. It may or may not be tied to English locations, including one in Margate and one in Sheffield. It might be read as a “concept album” about a beautician, what with the fragmented observations about the daily routine of a hair stylist and the secrets of what goes on behind the nail bar. These banal recits acquire some sort of mysterious profundity from the way they are read into the surrounding electronic noise, the words distorted and inhuman, sentences unfinished. The most part of the album however consists of various insufferable and interminable high-pitched mechanical whines, combined with unpleasant bursts of evil static noise. From these unpromising elements, this cassette achieves a remarkable degree of sublimation; everyday life transformed into unsettling art-noise. In a tasteful “pink bouffant” cassette shell…very good.

Speaking of unpleasant art-noise, a CDR by Papal Bull was also in this envelope…the kind of envelope that really makes my day…it’s called In Ceres A Pig With Human Hands And Feet Was Born (CHOCOLATE MONK choc.253), it’s on Dylan Nyoukis’ label, and contains recordings made in Newcastle and Sheffield by Jon Marshall and Joe Murray. Using dictaphones, harmonium, harmonica reeds and their own voices, they set up an uncanny uglified roaring, quite often heavily distorted and proceeding for long stretches with no rhyme or reason in continual energy-bursts. While ‘Bourgeois Blues’ is one of the most insufferable examples of their craft – it’s like two gigantic elephants breathing their last through swollen trunks packed with broken telephone receivers – the track ‘Sniff Out Where the Boar is Hiding’ has a strangely intense beauty that reminds us of The Skaters, a relentless chiming effect that burrows its way into your brain like a malevolent beetle for 11 minutes. There is grotesque Dada poetry grunted out on ‘Esther Mung, The Tenderloin’, while the final track ‘Only the mouth and nose…’ is another lengthy go-for-broke intenso-fest, where the chattering apes are joined by erhu player Stephen Chase. What’s impressive about this glorious music is how human it all sounds; the voices and lungs of the duo are what’s prominent, and there’s not too much reliance on the prop of electronic effects, pedals, echo or distortion, such as you find with table noise types. This is one Papal Bull I’m glad to have received in my diocese! Many thanks to Jon for sending these.