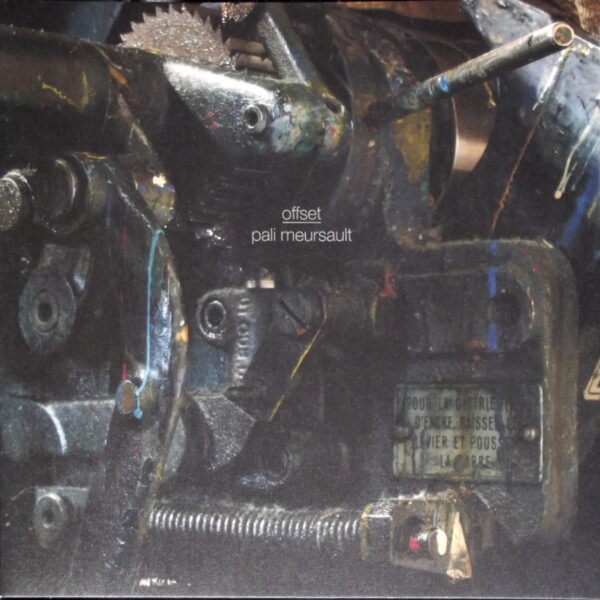 What is it about modern artists and urban desolation? They can’t get enough of that abject despair and industrial ruin 1. Just give one of them a video camera and they’ll come up with a movie like Entrailles (DAC RECORDS DAC 2018), which was produced by the French artist Gregory Robin, and his subject was the Saint Etienne coal mine in the Loire, which was decommissioned at the end of the 1970s. Natch, even though it’s currently unused, there’s still plenty of amazing sights to be had as his camera enters the installation, passes by the rows of showers, and dips down into the depths via the still-functioning elevator. There he finds tons of fascinating machinery, dials, cogs, and handles, and mining overalls and helmets hanging from a vast ceiling and looking like alien bats with their dirty wings folded up for the night. In the centre of this space he also finds Franck Vigroux, the French electro-acoustic noise guy whose work we love so much, playing his keyboards, mixing desk, or rocking out with his amplified red guitar while surrounded by cast iron, chains, and distressed surfaces. Yes, Vigroux did the soundtrack for this vision of modern abandonment, a symbol of a near-dead industry and a reminder of the complexity of technology that was pretty much based in the 19th-century, but had a long half-life. I can’t get enough of Vigroux’s stern, unsmiling sounds, which are usually enriched with plenty of reverb and other juicy effects; in this electronic drone music, he transforms the idea of “metal music” into something you could chew with your mandibles. The video starts off fairly promising, and does have some nice images in places; but a good chunk of it is just documenting Vigroux playing his setup, dressed in black, stood in the middle of the old installation. He’s a great musician, but in terms of giving off a stately brooding presence, he’s a tad lacking. At these moments, it becomes just like any other naff music video, and quite a dated one at that. From 19 February 2013.

Speaking of “metal music”, we’ve got Daniel Menche and his Marriage of Metals (EDITIONS MEGO 174) LP whereon he offers up two sides of metal-sourced material carefully forged and fused in his personal studio furnace. This project started when he was allowed within handling distance of the Gamelan instruments held at Lewis and Clark College in Portland. After he recorded a bucketload of gong sounds, he ported the results through assorted distortion techniques, and subjected the material to his inimitable cutting and assembly technique. Net result is two side-long episodes of surprisingly gentle and highly compelling murmuring, detailed noise. I say “gentle” in full knowledge of the bludgeoning racket Menche has sometimes been capable of, but Marriage of Metals is far more beguiling and even somewhat musical; root notes can’t help bleeding into the bubbling potage, no matter how much noise, grit and feedback he brings into the stew. Don’t expect much in the way of variation across each side, though; instead, you get a mesmerising and unchanging continuum teeming with strange details, much like metal shavings and iron filings dancing in the air. From April 2013.

While we’re in this vaguely “mechanical” and metal-based mode, we ought to bend an ear to the Offset (DOUBTFUL SOUNDS DOUBT 11 / UNIVERSINTERNATIONAL UI 019) LP by Pali Meursault. When I played this jet-black grindathon with its oil-drenched cover it induced instant visions of a faintly grim mechanised world where old-fashioned robots had all but taken over the world, except they weren’t doing a very good job of it and they needed a lot of oiling just to get out of bed in the morning. Like most of us, in fact. Imagine my surprise when I read the liner notes and found that Offset turns out to be based on field recordings of an old litho press. He did it in two print workshops in Grenoble and Paris, and presumably performed some transformative and editing work on the recordings at a later date. There’s an intention to give us something that’s both a decent sound recording of these near-antique machines working away in hot pumping action, and a suite of composerly electro-acoustic variations on their repetitive chugging rhythms. As Meursault worked on this piece, hypnotised by the insistent back-and-forth motions of the cylinders, feeders and rollers, he started to weave a dream of how the machine has been celebrated and perceived in sound art over the last hundred years. His main plot-points in this cultural schema are the work of the Futurists, industrial music, and techno; hard to argue with that lineage, although it’s not a terribly original line of thought either. No matter, because the actual LP is a splendid listen, never once descending into any of the sonic violence or clichéd manipulation one might have expected from those of the Industrial school. Where some see metal cogs as instruments that will crush mankind’s spirit (or at least mash his fingers into a pulp, if he’s unfortunate enough to trap his hand in the mechanism), Meursault’s cogs are somehow more benign, and the record makes us nostalgic for a time when Newtonian physics still held sway in the world. What he should do next perhaps is make a typewriter record. From October 2013.