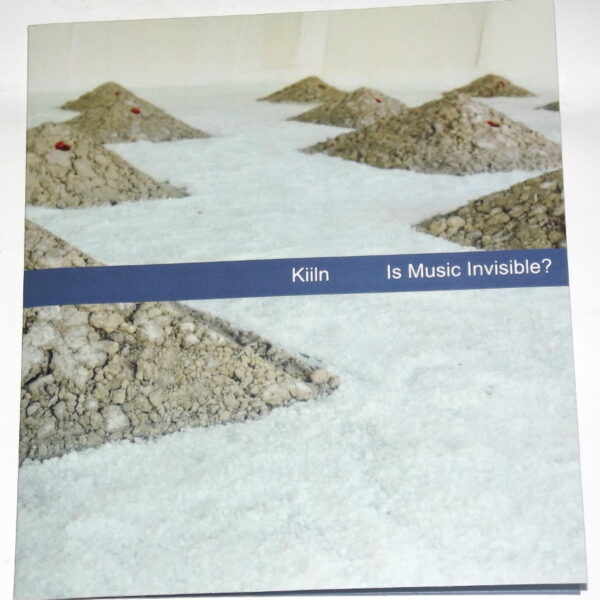 Beamed in from Canada are two sessions captured in Nov 2012 and Jan 2013, by the improvising duo Kiiln (Lance Austin Olman and Mathieu Ruhlmann), who grace us here with five softly spoken, open-ended, static-based improvisations rich in mysterious mechanical whirrings, purrings and clunks born of an arsenal of ‘amplified objects’ alongside more familiar instrumental sources. By virtue of their close-miking and bold phantasmography, Kiiln offer manifold chromatic permutations for the space that lies between your ears, with a bit of dental-drill piercing at no extra cost. Abundant are low-res vacuum drones, taut, crackling strands of yarn and thickets of static seemingly purchased in bulk; all dropped with considerate timing to ensure the hit count (in the most nebulous possible sense) is sufficiently stacked-up. Granted, it’s ‘quiet’ music, but it has personality, and while the sort of thing one might sympathetically buy at a chance-attended gig, we could all do worse than to invest the ticket money in a nice bottle of white to accompany a maiden voyage or two through these unobtrusive explorations. Limited to 100 copies as well, thus upping the buyer’s hip quotient. Sixty minutes to the second, this long-winded improvisation consists of moody exhalations and other odd emissions so soft to the ear that the audience threatens initially to subsume. It’s an illusion however: the crowd voices are just another red herring to add to a tank of false beginnings that exist seemingly to defy all desire for development. Throughout this process, gauzy webs form in the darkness, thicken and soon dissolve into other tentative textures begotten by a bemusing mix of hiss-inducing guitar jangling, teeth-rattling double bass and punctuational breathwork. Your navigators and interpreters for this amble are Anne La Berge (flute and electronics), Dario Calderone (double bass), Gareth Davis (bass clarinet), Reinier van Houdt (piano, keyboards and electronics), Wiek Hijmans (electric guitar), Yannis Kyriakides (computer and electronics). Their collective designation of ‘Maze’ could not be more appropriate for the current endeavour.

Making the effort to interpret a set of ambiguous instructions penned by Alvin Lucier in 1970, prior to performing the musicians each made a (mnemonic or physical) recording of a selected outdoor environment, which they then set about recreating during a group improvisation with the unexpurgated ‘memory device’ to hand. While extensive detail is not provided as to means employed here, it would appear that headphones were worn by all performers, with attention divided between internal and external environments (a bit like pubbing with friends and their iPhones perhaps), though it is unclear as to whether we actually hear those initial recordings. The result is an unusual interplay in which highly subjective personal dimensions are invoked by each performer: a process of unfolding that would appear to have further implications for the CD’s listeners in their own listening environment, which strikes me as like being written into a Jorge Luis Borges story.

In sum, it’s a searing non-event, though as an exercise in patience it is quite impressive, as tethered urges raise the temperature so gradually as to embroil the unwary listener, though never actually to the point of catharsis or climax.