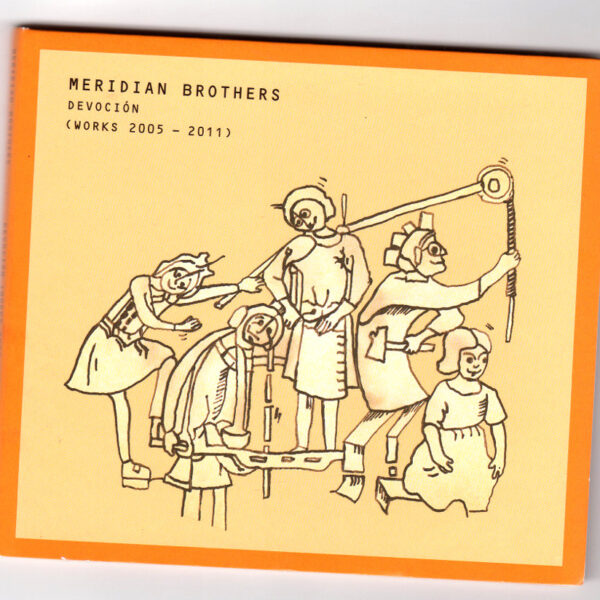 Delightful and irresistible is Devoción (Works 2005-2011) (STAUBGOLD 128), a compilation of music by Meridian Brothers, an experimental music combo from Bogota. All the music and singing here is the work of one fellow, the multi-talented Eblis Álvarez. Apparently he alone makes all the music for the Meridian Brothers records, although there is also a five-piece of players – their names are listed inside the CD cover – who constitute, since 2009, the live version of the band. Meridian Brothers generate an extremely playful and infectious music based on traditional Colombian music genres, including Cumbia and Salsa, with influences also coming from 1960s tropicalia, surf music, Peruvian music, and even highlife and Ethiopian music. A miniature avant-carnival performed by a comedy version of the cast from El Topo. What you hear is balmy and eccentric combinations of woodwinds, percussion, keyboards, electronics, bass, playing spare and compacted melodic lines – all in the service of supporting Álvarez’s slightly loopy singing voice. Some of the experimental vibe can be attributed to the time he spent in Denmark at the Danish Institute of Electronic Music, where he learned useful techniques that have fed into the realisation of his fractured lo-fi one-man-band vision. None of the words are sung in English, but there’s no mistaking the crazed charm of a fellow loon in these screwball ditties; there’s also tremendous assurance in the way the instrumental layers are assembled and mixed in unexpected dubby fashion, and the economy with which special effects, samples, and distortion techniques are applied. In all these playful excursions, he never once neglects the pulsebeat and every song trundles forward with an endearing rackety motion. And talk about your wild syncopation – the rhythms are as tricky as 20 reticulated armour-plated centipedes crawling over the surface of the Las Lajas Sanctuary. In places, I’d almost be tempted to dub him the Colombian one-man Portishead, but he’s far more prolific and not as straight-faced as those chilly, repressed English types. Astonishing. No wonder he’s regarded as a genius in his home country. From August 2013.