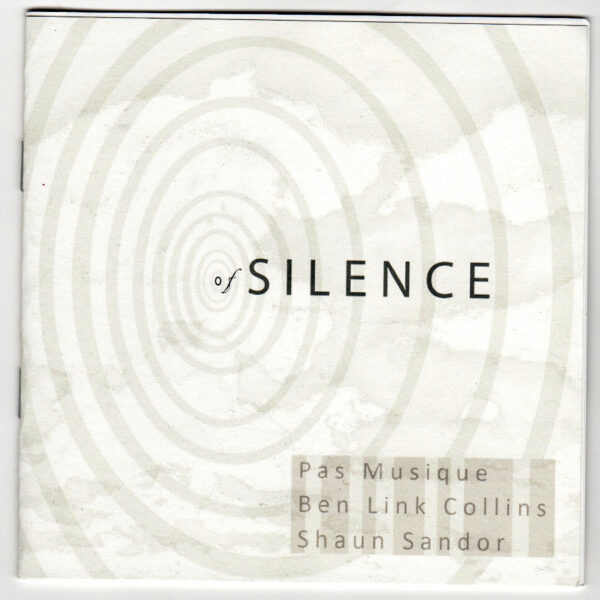 I recently attended a conference in New York about music and film. One of the most fascinating papers given was about how film soundtrack has to approximate silence, through some use of background noise, industrial drone, ambient sounds etc. The speaker started by mentioning John Cage’s 4’33” work, although strangely – given his paper – he disputed Cage’s idea that silence doesn’t exist. I say strangely as it seemed to me that both Cage (whose 4’33” manuscript and other documentation were on display at MoMA) and many film composers agreed, and make us listen to other sounds when we think that we are listening to nothing.

Anyway, Pas Musique, Ben Link Collins and Shaun Sandor frame their CD using Cage’s ideas, but also the idea of silence as a blank canvas, something waiting to be filled, ideas of inaudibility, studio silence, and The Art of Noise. There are nine tracks on this CD, three sets of three, with the 2nd and third of each trio deriving from their predecessor.

Whilst conceptually these are interesting, it has to be said as ‘music’ or even ‘sound’ they are not. The five and a half pages discussing the work is in the end more informative and engaging than the work which is the product of it. I also have to say that in the end the compositions and process seem more about the recording process itself than silence. To amplify and endlessly re-record a original tape of silence is about the noise of technology and machinery, about decay, analogue and digital equipment rather than silence.

Peter Orins’ CD actually has nothing to do with this kind of work, or so says the press release, which suggests Orins uses an electronic treatment to allow himself to duet with himself pushing himself endlessly into new improvisations and dialogue. So why have I put my review here? Well, the CD will not play on any computer, stereo deck or boombox in the house, has silenced itself. I applaud the concept, and as someone who dislikes most drumming intensely can truthfully say it is the best CD by a drummer I have [n]ever heard.