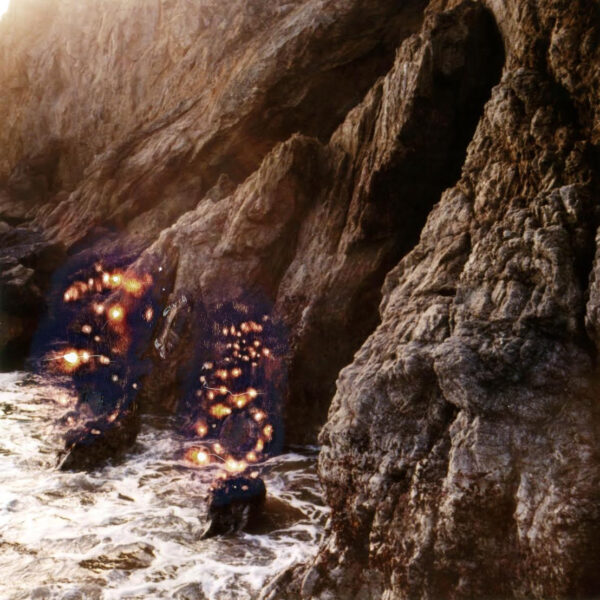 At the time of writing this review, I knew very little about ION apart from the fact that this trio is based in San Francisco and that this self-titled album is the band’s debut recording. The musicians’ days of being obscure may soon end if this album becomes better known. With each passing day, that happy state becomes all the more likely as “ION” is a soaring example of post-black metal psychedelic transcendence.

That the music is intended to be a totally immersive experience is apparent from the way the five tracks are linked together to form one over-arching work that encompasses many contradictions, dualities and polarities in musical structure, atmosphere and sound. Bursts of blast-beat aggression chaos give way to wide expanses of space interrupted only by squiggles of tone and echo background wash. Starkly sorrowful melodic riffs ebb and flow like waves upon a beach before dissolving into seas of buzzing guitar noise and frantic percussion. In short, the ION musicians range far and wide exploring their musical territory – and what a vast and varied territory that is, taking in wide plains of ambience, hills of frenzied tremolo guitar chord squiggle, chunky melody and rhythm mountain ranges and blast-beat torrents.

As the music progresses, the contrasts become ever greater: the loudest, angriest hyper-blasting black metal can calm and reduce right down to the softest acoustic-guitar twang, at times inaudible save only for reverb effects. Tones and effects may be suspended in a murky space, their connection to one another uncertain and occurring randomly, until with effort a melody may form as if from spontaneous generation from sound fragments. On occasions the music can be very pretty and shapely but this is not shoegazer post-BM: its ambitions are much grander and the path it must take tends towards high and low extremes in emotion and atmosphere.

Interstellar space ambience (“Embers”) proves to be no barrier to ION’s musical quest and aspirations; listeners may be confronted with the immense nature of the sonic universe looming in their heads and their own place within it. The music is at its most psychedelic, abstract, improvised and disorienting in later parts of the album where we are thrust into deep inner (or outer) space. As the space trip nears its destination, the guys exert themselves heroically to deliver an exhilarating and dramatic summation of all that’s gone before. The one thing that’s a little bit lacking here is a very thunderous percussion back-up as the drums at this point are a bit thin and tinny, and the guys have to rely on chunky guitar barrage and UFO lift-off and landing effects to make their way through the climax.

Fittingly for such an awe-inspiring musical landscape, there are no fewer than two lots of vocals, one typically BM-raspy and the other a deeper guttural death metal vocal. At this point in the band’s history, I am not sure what the lyrics of three tracks are intended to refer to and listeners are at liberty to interpret them as they wish: they hint at some dissolution of an individual’s material state to reveal that which is most essential about that person and whether s/he ascends to a higher plane of existence or something much lower, darker and baser.

The band that most often comes to mind for me when I hear this music is the UK-based Fen, especially in ION’s sound when the guys are at their most melodic and melancholy. Other bands that might be referenced as points of comparison include Altar of Plagues (their White Tomb phase), Wolves in the Throne Room for passion and drama, and other North American BM bands like Ash Borer, Fell Voices, Panopticon and Skagos who deliver strong BM with ambient elements and mystical, shamanistic themes or social messages. A non-BM band that springs to mind is Samsara Blues Experiment which engages in similar psychedelic space metal head trips but ION far out-strips that band for risk-taking. Fans of all these bands should listen to ION’s debut if they can get copies. At this time of writing, the album was self-released but Aquarius Records in San Francisco may still have some copies.