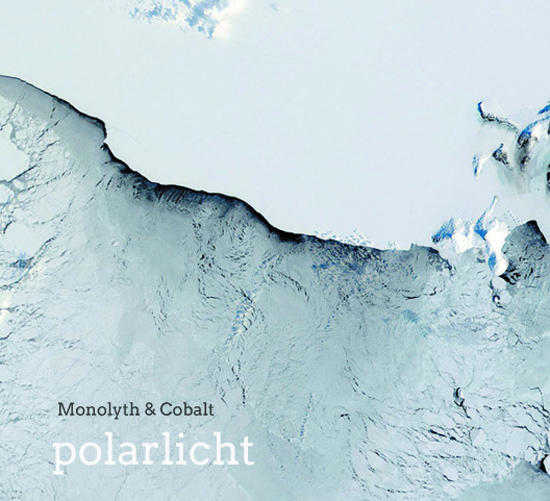 In spite of its name which translates from German into English as “Polar Light” and the artwork of cracking ice viewed from above, this recording is not really much of a cold and forbidding Ice Age ambient soundscape opus to be filed in among other Arctically or Antarctically inspired works; it turns out to be a slow, relaxing and gently immersive journey through glitch electronica worlds sculpted by one Mathias Van Eecloo, the man behind Monolyth & Cobalt. The recording was made in Brittany over a period of some 18 months from April 2012 to October 2013.

There may be allusions to maritime exploration on the album and the fact that the work was recorded in Brittany – an area with connections to the sea – might have some significance. “Blooming Stones” sets the tone releasing this listener to drift on gentle grey seas with rhythmic bell chimes and something of a slow undulating sea-shanty melody.  The tracks conjure up quiet landscapes of muted grey or light sandy colours where the sea raises barely more than a murmur of white wave froth and washes blue-grey up pale beaches. Even the skies are a restful pale blue colour. Not much happens and we are whisked from one track to the next to inspect new low-key soundscapes.

Track 4 promises to be a bit more interesting than previous pieces with a mechanical rhythm loop and some off-kilter noises suggesting all’s not quite calm and serene, and any moment we may run across some rusted toys or machines still able to play a melody after years of disuse and deterioration. Following after is a track where instruments seem to be more recognisable yet still unidentifiable – there could be a banjo in the music – and a sighing siren vocal is present as well. As the album progresses, the music broadens to include acoustic guitar, harmonica (or something very like it), violin and field recordings or found monologue in tracks like “Et Ces Arbres” and “Verhaal”.

The most interesting track on the whole album turns out to be “Birds (Are Some Holes in the Sky Through a Man can Pass)” which features some beautifully resonant string instruments, one of them possibly a harp or a zither, delicately trilling against a seesaw rhythm.

True, the general tone of the album rarely rises above mildly stimulating and the criticism could be made that the whole recording is just too mild and placid to hold most people’s attention. Sooner or later, someone will start wishing for something pacey and exciting, like a great white shark lurking in the unassuming grey sea. Folks with short attention spans will drift away leaving a few willing to follow Van Eecloo and to let him take his own time describing the vistas before them.

It doesn’t really matter that I fail to see the polar connection this music makes: it’s very soothing, low-key and minimal, and there are some interesting acoustic surprises in later tracks that add individuality and a distinct folksy flavour.