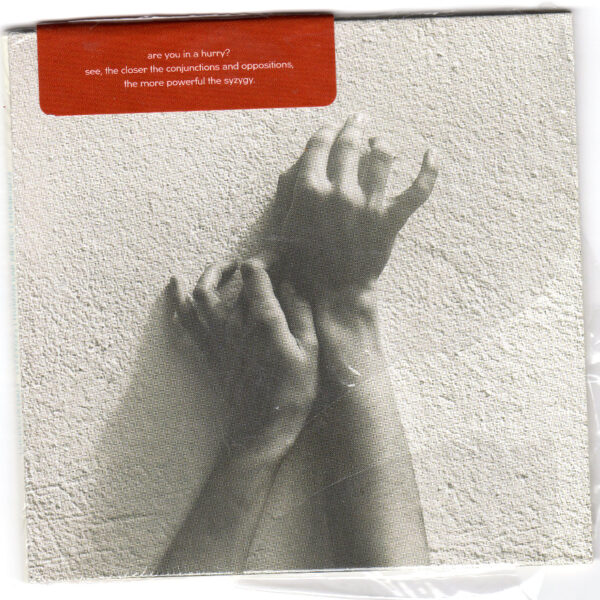 Lucrecia Dalt‘s Syzygy (HUMAN EAR MUSIC HEMK0032) comes across as a record that’s trying to tell me something; it’s studded with written texts, short mysterious paragraphs, not only in the gatefold interior of the cover but printed on the CD disk, and on the tiny cover sticker which asks me “are you in a hurry?”, in a faintly chiding tone. The opening track title ‘Glossolalia’ also clues you into a preoccupation with the spoken word, and when playing with the printed text she chooses to print her track titles backwards on the cover, and provide her name in embossed form; one step away from the Braille text which appeared on the back cover of Paul McCartney’s Red Rose Speedway. So far, no opportunity has been wasted to keep the meaning of the text at arm’s length; Emily Dickinson could have done no better. Even her website is likewise served up as disjointed fragments, short texts and disjunctive images inviting us to follow clues and dig into deeper meanings, and she makes more allusions per square inch than the complete works of Jorge Luis Borges.

I’m not here to pass on any deeper understanding from today’s listen, but the record is oddly compelling in a very gentle and mysterious manner; Dalt makes sparing use of instrumentation such as muffled keyboards, synths, and acoustic guitars, to build fragile structures which her voice inhabits like a fleeting phantom floating past on floorboards greased with candle wax (viz. Lewis Carroll’s Phantasmagoria). This sonic world, like a more avant version of Kate Bush crossed with Virginia Astley or Enja, is the perfect white-walled and heavily carpeted arena for her disjunctive fragments of text to thrive. Is she even a singer? Half of the time she’s delivering a spoken-word recit, and doing so in breathy whispers that occlude the text still further. While you may not notice the impact of her work at once, I feel sure that it will manifest itself weeks later when you find yourself scrutinising a text printed in a foreign language, and suddenly find you can understand half of it by the sheer power of intuition. This unique item was recorded in Barcelona, though apparently the artist was born in Columbia. I would guess she’s made a virtue of solitude, contemplation, and exile, and that’s going to be her lifetime’s work. Interested listeners may which to investigate her previous release for this label, Commotus, or her debut album Congost. Received this one in October 2013.