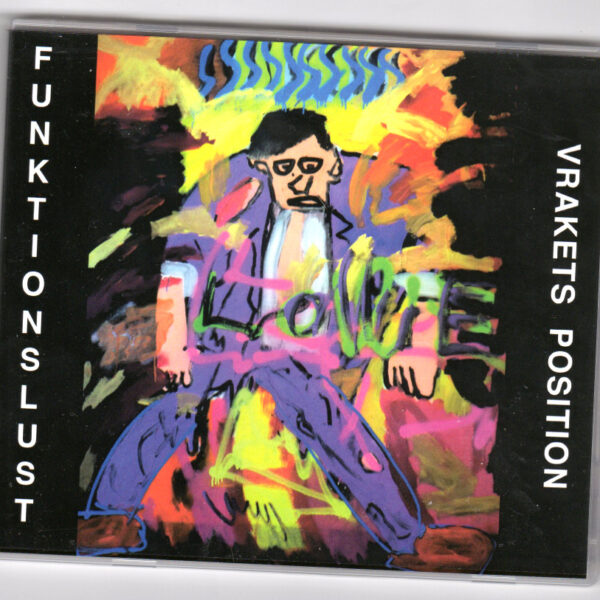 The third CD from Vrakets Position arrived in November 2013. It’s an inspiring tale, how this Swedish duo have been enjoying a purple patch of creativity since their re-emergence in 2011 and creating some of the most energised and wild music of their careers. [1. The story is that they were a Swedish post-punk band in the 1980s who suddenly got it together again in the 21st century.] They do it by improvising freely with their large chunks of electronic equipment – synths, guitars, effects, loopers, and such like – and just playing and playing continuously, as only they know how, and relying on their simpatico bond to produce highly listenable results. Nothing stops them…in 2013 they had a chance to perform live at the Skanes Association of Art. Apparently the organisers couldn’t get them off the stage for all of four hours, while back-projections of cosmic flowers and stars flickered behind them courtesy of the participating audience. In the end they probably had to threaten removal by use of bulldozer, which I gather is known as a “Swedish exit”.

Funktionslust (VRAKGODS 003) is not a document of that four-hour event, although I have no doubt we’ll be receiving a luxury box set of that music one day, but it does feature a lengthy bout with the flagons which they call ‘Entrainment 1-3’, which was recorded live in Misterhult in August 2013. It’s 44 minutes of drone rock overloaded with tons of effects, and it’s taking a superhuman effort on their part to keep this elephantine bloated mass from collapsing into a heap of formless dough. As ever, the drum machine is their friend, adding a degree of structure with its constant pulse which anchors the hovering tones to the ground. During the freak-out mid section all the music is pinned into place that drum machine playing in 4-4 time, a device which may have the rather unfortunate effect of making the duo seem like a disco version of Ash Ra Tempel. However, we’re more than compensated with the delicious layers of synth noise and guitar excess we get from Göran Green and Tommy Lindholm, sounds which constantly sweep back and forth between the zones of sweet melodious droning and the zones of outright abrasive noise, in somewhat schizophrenic fashion.

The second piece ‘Fritid’ is also propelled by the drum machine and at first sight seemed to be some errant piece of Eurofunk cabaret music they’d accidentally taped at the venue, but in fact its uptempo rhythms conceal a darker side; apparently its lyrics are inspired by a work of Nietzsche called ‘Song of a goatherder’. Bo Hylander provided the cover art for this one, a garish clash of hideous colour, primitive paint smears and “bad” drawing, which visually anticipates the heavy-handed music we find within. I don’t mean this as criticism, since I always enjoy the overall unhinged sound of Vrakets Position, and their lumbering repetitions and “bad” playing are a big part of the equation.