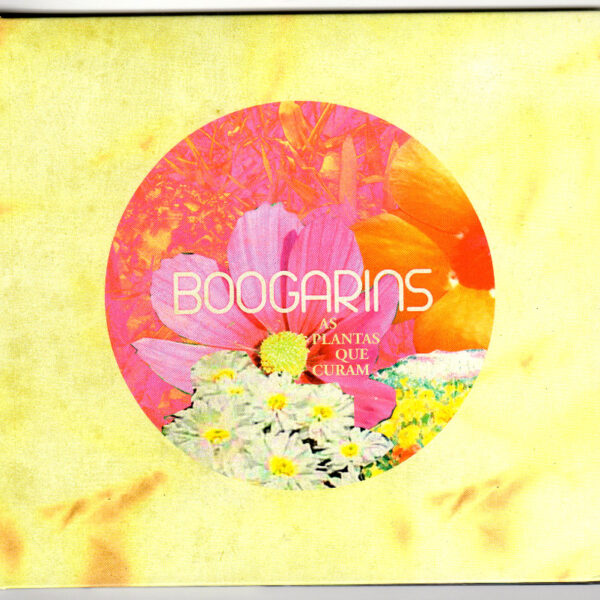 Fans of Brazilian pop and Tropicalista singers like Gilberto Gil and Caetano Veloso are advised to get their nutcrackers around the album As Plantas Que Curam (OTHER MUSIC OM-008-2) by Boogarins…opening seconds are glorious vision of sun-drenched pop harmony…sounds like it ought to have been recorded in 1968 or 1969…the vocal harmonies worthy of The Byrds or The Monkees, the jangly 12-string Rickenbackers of Roger McGuinn…but of course the duo of Fernando Almeida and Benke Ferraz recorded this in 2012, doing it with the wide-eyed innocence of fresh beginners, since it’s all done with borrowed equipment, recorded in their parents’ basements, and the pair of them were even driven to teach themselves how to make a proper recording set-up, all before they even thought of becoming a “band”, or playing live. All of the songs are about love and sunshine and flying and travels into strange places, almost every song flies like a condor, and the clear-as-water singing voices seem to be streaming direct from the sun. Very psychedelic, but it’s more about the craft of songwriting, gorgeous chords and rhythms and strong vocal harmonies than it is about showcasing intensified fretwork – so no excessive guitar solo freakouts or Hammond organ solos to clutter up the set, just short pop-song length toons to delight. Only a couple of tracks near the end, ‘Eu Vou’ and ‘Cancao Perdida’, get vaguely trippy in a lightweight manner (like that suppressed episode from The Brady Bunch where they drink spiked lemonade), and from the cover art you can tell that richly-coloured hothouse flowers are the only “plants that heal” (this is how the title translates) which Boogarins care about, rather than the hippie’s drug of choice…I hope our young friends can sustain their delicate art, as this remarkable debut has the feel to me of a fragile butterfly, an evanescent dream too fleetingly beautiful to be true. In that respect, it’s almost worthy to hold its head alongside cult favourite Farewell Aldebaran. As I write these lines, Boogarins are just coming to the end of a US tour…wish them well and plenty of hamburgers for all, with plenty of mustard and relish on those burgers…and be sure to purchase a copy of this sunshine item. From October 2013. 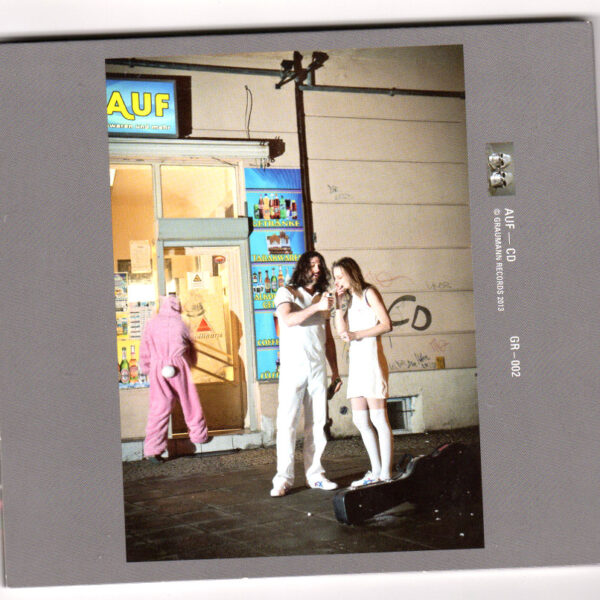 Great to hear the return of Anne Rolfs who knocked the socks off the Sound Projector tootsies in 2008 when she recorded as Allroh…just one woman, a guitar and a singing voice creating much unkempt rock-based avant whoopery through her powerful little amp. If I ever felt myself slipping away from my fundamental rock roots, I felt I could depend on Allroh to remind me of the basics of Led Zeppelin, The Stooges, and The Magic Band. She’s now back as one half of Auf with a record simply called CD (GRAUMANN RECORDS GR-002), 20 minutes worth of hard-driving steel for you to sink into the backs of any passing anacondas or zebras…joined now by drummer Mathias Brendel who also drums in Skew Siskin, the band that once supported Motorhead, but he may be more well known in showbiz for playing in Peaches’ touring ensemble. While this mini-album isn’t as off-the-wall as Allroh’s manic work, we still recommend it for its directed energy, its relentless hammering qualities – it could push a man through the trunk of a tree. Also its monotonous (in a good way) tone, where neither guitar nor vocal stray very far from a single root note, which (as Bo Diddley or Mo Tucker will tell you) is mandatory if you want to create great rock music without actually signing a contract in your own blood with “Mr Pitchfork”. Anne Rolfs drives down the freeway like a manic dwarf behind the wheel of a Greyhound bus. Meanwhile Brendel’s stickwork is filling what’s left of the available space. In fact it’s arguably a little heavy on the paradiddles and clever fills, and just a shade too “busy” for me personally. If I were managing this act I would insist on a drummer who just plays one large tom and a snare in simplistic fashion for that idealised “rockabilly” sound. However, it seems Rolfs spent years looking for the perfect drummer before she settled on this Russell Brand look-a-like, and her decision is not to be questioned. Neither is the decision to dress up like a low-rent version of White Stripes on the cover. At some point after they formed their chops in rehearsal rooms and recorded this, they were enlisted to support Steve Albini’s Shellac on tour. Since this is the same Albini who spotted Anne Rolf’s potential when she was part of Wuhling in the 1990s, this probably proves once again that talent will out. From 17 June 2013. Last heard from Necro Deathmort with their 2012 album The Colonial Script, with its memorable “dead astronaut” cover printed in sumptuous shades of black. Their EP1 (DISTRACTION RECORDS DIST29) is six tracks from 2013 pressed as a 12″ vinyl 45 with snazzy artwork by Thomas Neulinger. Mostly because of their name, I always think they ought to be a Black Metal band, but they’re dancefloor types really – this Newcastle duo mostly create variants of Techno and dub music with a vaguely sinister vibe, full of growling and snarling drone effects. I like the heavyweight dub track ‘Titan’, but the remainder is ordinary electro-beat malarkey.