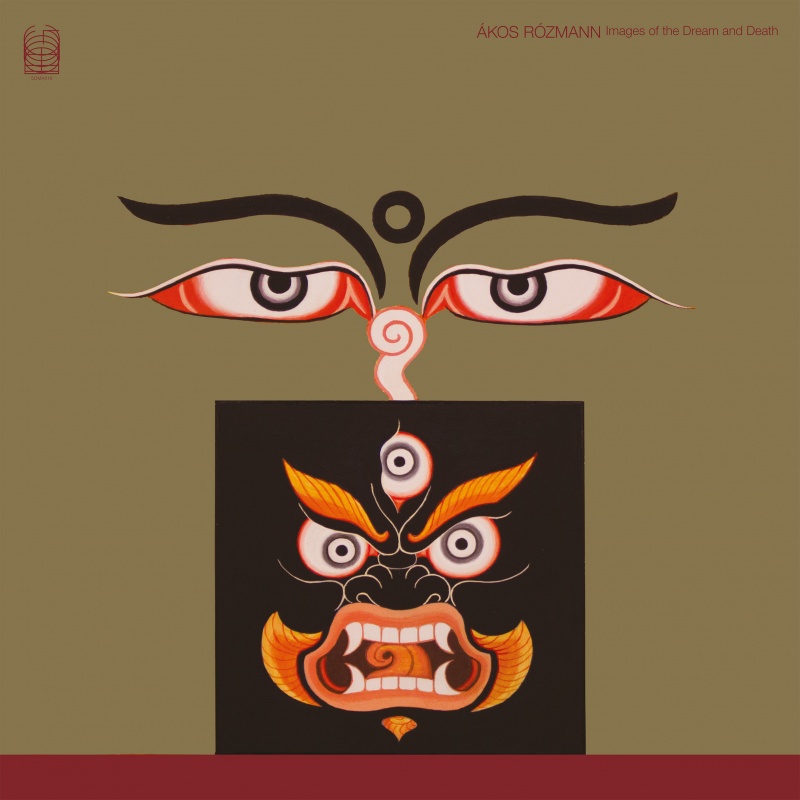 Grateful as I am for the fine work of Keith Fullerton Whitman’s untiring Creel Pone label and its mission to uncover and reissue unaffordable vintage electronic gems from mythology status, there certainly are days when nothing lighter than 180-gram vinyl will do, and Stephen O’Malley’s Ideologic Organ has stepped up to the plate admirably on this occasion, with no fewer than three weighty slabs of the black stuff. A full sitting of Swedish-Hungarian composer Ákos Rózmann’s Images of the Dream and Death might hit some as heavily as a Bergman/Tarr movie marathon, but there are worse ways to test one’s mettle. Rózmann prepared this epic three-parter on a Buchla synthesizer for a 1974 debut: a landmark event, equalled only by the activation of the Large Hadron Collider. This particular, accelerated collision of primal forces resounded through the cloisters of a church for a couple of hours, rattling the audience with effects such as ‘soft sacral lighting’ that intensifies to blinding in the final minutes and halting suddenly with the music. To my knowledge nobody went mad in the process, but few could have come closer to a religious experience at a live performance. The organisers of this grand undertaking must certainly have felt the weight of it all, though interestingly, Rózmann was absent from all but the 2001 performance in Essen, delegating technical duties to his trusted colleague Mats Lindström, as if his own desire and expectations would have contaminated proceedings. While revised at EMS/Elektronmusikstudion in Stockholm for this fourth performance and even with the composer himself on hand, he viewed this realisation as a bit of a failure; one of a couple of failures, actually.

Rózmann’s mandate for the work was to portray ‘good and evil’ via a structural progression of thematic and increasingly cohesive ‘blocks’ of sound linked by seemingly random noises and outbursts, from the exploratory first movement through to the more coherent (yet more visceral) third, via an audio dialogue between earth’s elemental forces in the second. In his notes, the composer describes the manifestation of these forces as though autonomous: ‘making themselves felt’ when ‘good’ motifs such as church bells are introduced: distorting, muddying and overwhelming them, wherein a further element of his ‘failure’ lurks: in his inability to convey good ‘idealistically’ via sound – rather via motifs of a dejected mankind or ‘deserted, anxious, weeping humanity’. To a listener of conventional sensibilities, these opposing tendencies will probably be difficult to discern, but in the majesty of their dialogue can at least be found an apprehension of ‘good and evil’ more transcendental than fire and brimstone showmanship. Oh to aspire to such failure!

The darkness of yet unmanifest forces encroach from the first moment of the first movement, hurtling into a medley of extreme sound ‘types’ that belong almost indiscriminately to the two stated categories. Dynamic interactions are explosive and self-exploratory, like a deity suddenly awakening in the mud of corporeality; sounds lash out in all directions as if determining dimensions; sudden shifts resemble tape editing. It coheres over time: primordial bangs to great gravelly grinds of heavy wooden carts tugged through vast, underground caves. Movements two and three refine this behaviour: the second sounding like pitch-shifted shopping carts crashing in a pinball machine. These sudden, explosive clusters convey a deepening of relationships ‘twixt the elements, as does the shuffling of electric rats between left and right channels. With the third movement we have a full-blown narrative on our hands, flaring and dissipating in more predictable intervals, though increasingly majestic. While few are likely to fully apprehend the nature of interactions here, the opportunity to observe is a special one and we might at least concur with Jim O’Rourke’s assessment of the experience that ‘the lingering feeling after hearing the works of Ákos Rózmann is the intangibility of naming what that lingering feeling is’.

Anyone who commits to the purchase of this epic set will likely make it through with little trouble, though concentration will be necessary, as it was for the patrons in that church in Essen in 2001. Musique concrète seldom exceeds this level of heavyweight, and (perhaps) satisfaction, though Ideologic Organ are soon to trump this mighty release with a 7CD collection of Rózmann’s ‘epic masterpiece’ 12 Stationer VI. One can only wonder at the fun we still have in store.