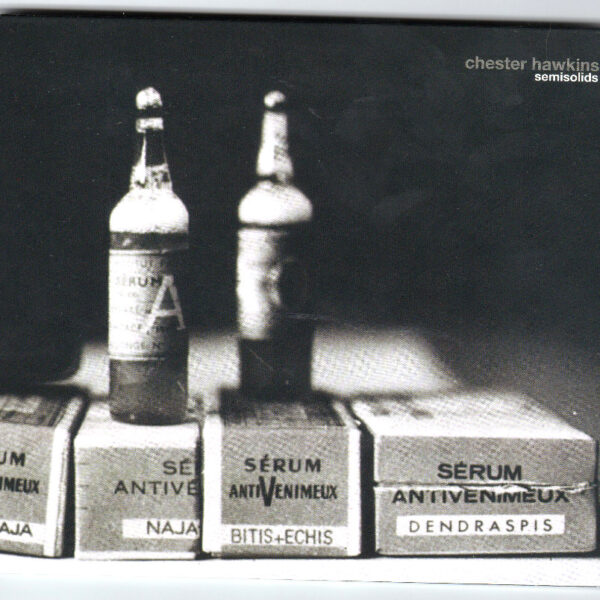 We’ve heard from Chester Hawkins in his Blue Sausage Infant guise, most recently with Manitou (a deranged bad acid trip of heavy drone) and Negative Space (his twisted take on dark progressive rock); both involved collaboration with other players, but Semisolids (INTANGIBLE ARTS IA016) has been released under his own name, and every sound was produced by Hawkins alone, plus he did the cover design and wrote the texts too. The album is terrific – a great slab of grisly, monotonous thumping and drones, shot throughout with semi-evil vibes and palpable atmospheres. If I can go off on a tangent, I’m reading the David Stubbs book on Krautrock 1 just now and Stubbs observes how one of the achievements of German 1970s underground music was the persistent attempts to escape the clichés and restrictions of blues-based rock music and its four beats to the bar patterns…a trait which manifests itself in exciting ways across the music of Can, Neu!, and most especially Faust. It’s a quality which Hawkins – a known and self-confessed Krautrock fan – might well be trying to emulate on his album, especially the first two tracks here ‘Iodine’ and ‘Nematode’, both of which use endless and primitive repetition which the determination of a mad sewing machine, reprogrammed to go on stitching blindly into an eternal dressmaker’s Hell. Indeed Hawkins’ propensity for pulsing out these delirious, mindlessly throbbing repetitions is stamped across most of this album, and he executes them with tremendous craft and well-honed studio skills…the stereo synth rhythms of ‘Isle of Dogs’, for example, are nothing short of hypnotic, and ‘Proximity Fuze’ wrong-foots the listener at every turn with its intricate network of sequencer patterns. A few tracks buck this trend towards utter simplicity and no-tune dirge and drone effects, such as ‘Malattia del Sonno’ which has an identifiable melody and is explicitly intended as Hawkins’s tribute to Italian horror movie soundtracks of the 1970s; and ‘Slender Loris’, which in the context of the rest of the album’s broody atmosphere emerges as a form of easy-listening electropop with its user-friendly drum machines trying to persuade you that these twisty and windy thin synth shapes that we perceive are not in reality evil serpents dropping from the ceiling to bite your ankles. In his press notes, Hawkins duly acknowledges his debts to Conrad Schnitzler and Cluster, but as ever this shrewd creator from Washington DC continues to assert his own unique identity, stamping it on every note he plays and records. One of his hallmarks is his taste for all that’s macabre and dark, but unlike some strung-out and mournful latterday industrial musician Hawkins remains fundamentally sanguine, and embraces the blackness of everyday living with good humour and gusto. The other subtext to this album is connected with drugs and/or disease, as indicated by the anti-venom serum artworks photographed in lurid film noir shades, and the Burroughs-like texts which sprawl across the folded panels of the digipak, packed with grotesque images plucked from the realm of nightmares. Indeed at times the listener will sensate the experience of a sleepy chloroform trance, as we drink deep from this heady brew. Arrived 21 January 2014.