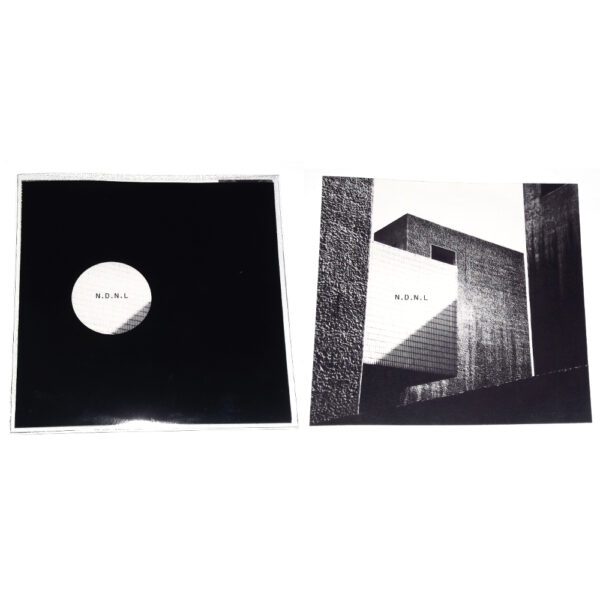 Five minimal-looking items of marginal electronica which represent the first block of releases from the label Wasted Capital Since 2013, which is a sub-label of Hideous Replica. If there’s any common ground here, it may be something to do with refusing easy answers, moving to the extremes of electronic sound, and exploring in a halting way some strange pockets of genuinely unexplored turfs. There’s tough listening here, and the sounds may not excite you much at first, but everyone in this box has their own voice, and they’re doing things not regularly on offer from other competing market stalls. Now read on.

Did you Get Home Okay Last Night? (WC5) is a very strange mini-album on CDR by N.D.N.L. Its determined blankness is fearsome, and many listeners will fail at the first post in a matter of seconds. The sole point of reference which might enable you a way into this closed-off world is the last track, where a fractured cover of The Fall’s ‘New Face In Hell’ is performed with a sense of listless despair. Matter of fact it’s not really a cover version at all, more like a radical deconstruction of the song’s informational content, performed by an insane android who doesn’t understand how music works. Mark E. Smith’s paranoid alarmist lyrics are reduced to a grim monotonous recit, flatly intoned over illogical and muffled electronic utterances. The remainder is three baffling tracks of bizarre electronic tones and percussive stabs, working to no discernible rules or patterns, and somehow generating a very claustrophobic sense of anxiety and fear. These may be uncertain and unfinished experiments, but they’re exciting and even slightly dangerous. The nightmarish cover art – a high-contrast image of a 1960s concrete architectural monstrosity – confirms the paranoid tendencies of N.D.N.L.’s world view.

A Still Season Unravels (WC2) is a video disc, for an audio-visual presentation created by the London sound artist Roberto Crippa working with Caleb Wood, using laptops and electronics and performed at a festival in Flussi, Italy. The very subdued visuals were apparently created by feeding their lugubrious music through a “performance patch”, thus creating real-time visuals on the screen while you watch. I found their solemn and aimless work a bit of a chore to process, but I do like the overall stern and austere aspect, its blank minimalism making no concessions whatsoever to audience enjoyment. 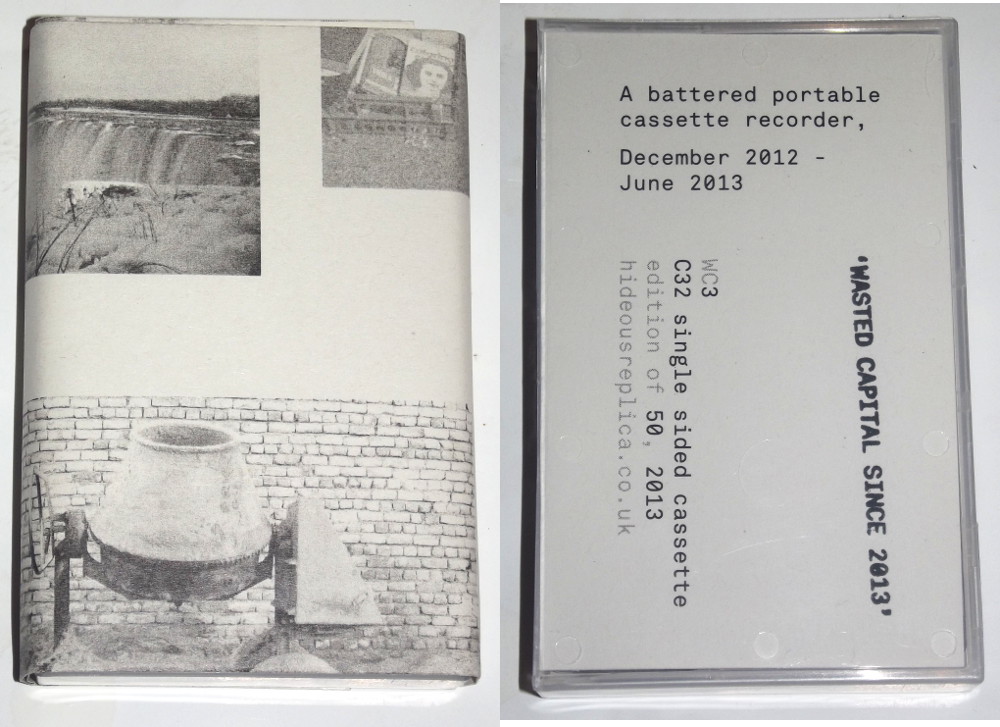 WC3 is a lumpy and ungainly (in a good way) cassette tape by the notable Vasco Alves, the Spaniard who’s had some association with Miguel A. Garcia, and whom we heard once before on a 2009 split with Ghoul for the Foredoom label. He usually works with radio waves, passing them through synths and other processors with a pair of coarse mitts, but on Volume 1 he’s working with a “battered portable cassette recorder” and producing many moments of impressive effects, presumably through exploiting the device’s mechanical malfunctions and errors to his advantage. His work thus remains very process based, but on this occasion he manages to transcend his methods and create sound art that can be both memorable and beautiful. When he surveys the kingdom, what he sees is a strange, faintly hostile world of tunnels, metal objects, and broken vehicles wobbling out of control. 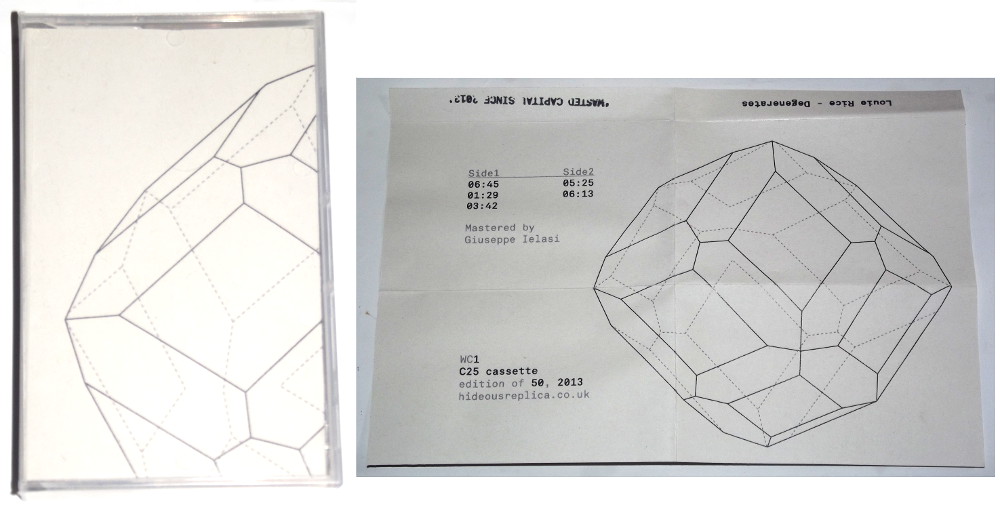 Louie Rice‘s Degenerates (WC1) is also a cassette, five tracks pasted onto a short C25. The London-based Rice is in fact the owner of this label and also its parent label Hideous Replica, which he runs with the help of Vasco Alves. Again we last heard the pair of them on Foredoom, where they performed as the duo ARAR to create Amplified Duo II – a process piece involving radio and synths, which was curiously unsatisfying at some level as I recall. Degenerates is an improvement, even if it’s not especially easy to listen to. Like with N.D.N.L. above, it seems there has been a concerted effort to reduce electronic music to a series of blanked-out, nondescript tones, and perform them with absolutely no passion or emotion. Rice likewise eschews melody, patterns, rhythms, or shape; odd formless tones just tumble out of the machines. Yet it’s strangely compelling. At the very least, since no artificial means such as sequencers have been used to propel the sounds, you can detect the hand of a human being turning knobs and working sliders in a reliably arbitrary and subjective fashion. 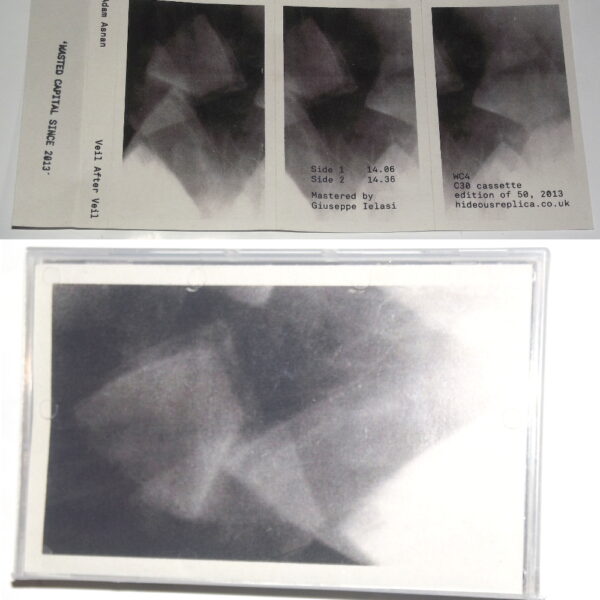 WC4 is by Adam Asnan. He’s an English composer who studied under Denis Smalley and continues as an electro-acoustic composer. He too has appeared on Foredoom – I’m sensing a pattern here – as one third of the trio VA AA LR, with Rice and Alvez. More recently, we noted his FBFC release for the German 1000füssler label. On Veil After Veil the methodology used is kept secret, but what emerges resembles slow-motion rattling inside an old oil drum or dustbin, sluggish and erratic movements brushing against metal. This is followed by desultory passages of electronic tones throbbing in a highly mysterious rhythmical manner. The textures vary from one event to the next, and if nothing else it becomes clear that Asnan is very aware of such matters as microphone placement and natural acoustics. As the work progresses, you’ll hear more similar puzzling episodes of airy drone and rattling effects, perhaps using field recordings as a starting point, all of them characterised by their refusal to describe or refer to anything, insisting that we accept them as pure sound and nothing else. This may not appear like a particularly appetising proposal, but before long you’ll find yourself succumbing to the charms of Veil After Veil, wandering down these nameless abstract streets that have no end or beginning, wondering what the worms of chance will bring you next.