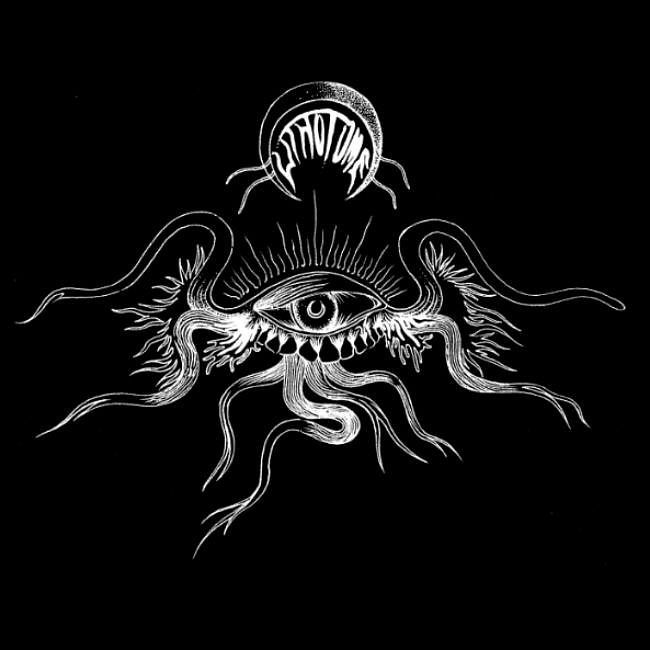 From start to finish, the music on this self-titled debut album is compelling: it’s a force that draws listeners into a universe of deranged, nauseous evil. Lithotome is a fairly recent creation that includes as vocalist N Imperial, formerly of Krieg, and various members from USBM bands Esoterica and Chaos Moon. With this history, Lithotome might have been expected to garner considerable attention in the BM underground; the surprise is that so far the band has escaped scrutiny. Possibly its sketchy discography of just this debut recording is one reason and the fact that the album was released on an obscure Australian label is another.

One notes straight away that the music is very dense, muddy, filthy even and oozing with deliberate cold-blooded and slimy intent. If opening track “Indoctrination”, a sub-bass ambient track of sub-human groan and grumble, doesn’t scare the shit (and more) out of you, you’re blessed indeed: the music starts off energetic and blast-beat fast with a guitar machine-gun attack force and heavy grinding bass influenced by elements from both black and death metal genres. Melodies and riffs that are often off-key change frequently in most songs and the musical journey can be very frenzied. Drumming is fast, efficient and precise though not especially outstanding for power until later tracks. Above the music though, the most noticeable feature is the vocals: dripping with venomous bacteria-laden saliva and driven by deranged motivations, the nature of which would kill us if we knew what they were, the gravelly crocodile voices plot the destruction of humankind and all evidence that our species ever existed in the universe and beyond.

Don’t go searching for definite songs as the music follows a purpose and goal far past human ken: a sinister force propels it ever onward until its reason for existence is fulfilled and who knows how long that takes? Apart from pauses where successive tracks end and begin, the music is continuous and flowing. Early tracks packed with riffs and melodies galore and brimming with aggression whiz by but the pace slows down halfway through and some of the early energy and sharpness are lost. The music does not become any heavier to compensate but at least it is more tolerable on the nerves. A looser style comes into being on “A Halo’s Swarm of Locusts” with dark space opening up and affording opportunity for some deep Sheol cave ambience to develop behind the reverberating monster carnivore vocals. While this track is welcome for its slight experimental approach in the interplay of the vocals, their echo treatment and the space, I think it is too long for what it does and a couple of minutes could have been shaved off without affecting its impact on listeners.

“Mother of Worms” is a good track, all blasting strings-n-skins cannon-fire with a deep chthonic crunching bass to ground it all and N Imperial’s leering guttural gurgle the pièce de résistance that makes the song a nauseating experience, one you wouldn’t wish on your worst enemy. The climax isn’t quite as sonically devastating as I would have preferred – I had expected something really blast-furnace searing and cacophonous that would send my brain clean round the S-bend and back – but other listeners (I suspect the majority) may be quite happy to find themselves still alive after the music falls silent.

The recording has something to please most people depending on their preferences: straight-out death metal fans will prefer the earlier half of the album and find the rest of it something of a let-down, other people will be interested in the slightly experimental fifth track. Generally this is not a bad effort though given the band’s pedigree, listeners might be a bit disappointed that this debut is not better than it is. The most impressive aspects of the recording are its reptilian soundscapes and equally serpentine vocals; what’s needed now is a more definite focus and a strong determination to conquer the universe with the most disgusting and deranged music alive … or dead.