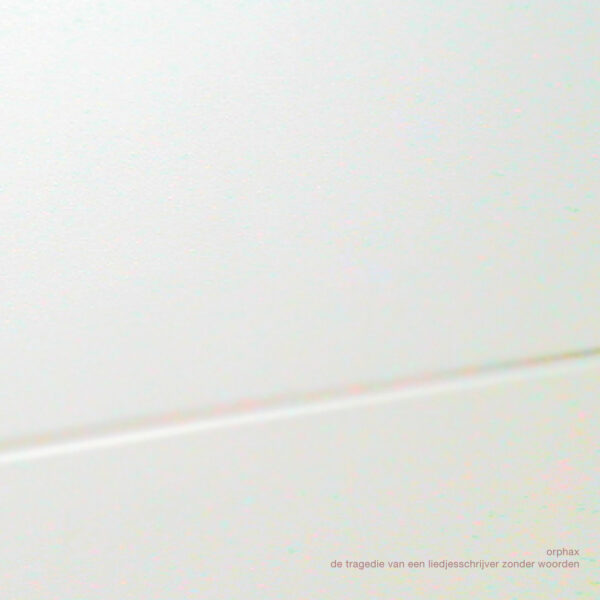 This is an album that is the result of a long-term gestation. Written between 2005 and 2007, revisited between 2008 and 2010, and released now. This stretches the writing, putting away, ‘listening again before seeing if it is any good’ to new limits. I did read once that Astral Weeks was written six years prior to release, but that doesn’t even come close to this one. I should say, during this period he was coming to terms with (at that time) an undiagnosed illness, finishing studies and having to earn a crust, so there are extenuating circumstances. Enough to fill your bag with varying emotions. The compositions from this period reflect the various states of mind encountered. Love, stress, doubt, struggling with the illness, prior to finding answers to some questions and gaining piece of mind.

In the late 1990s he traded in his drum kit for a Roland JP-8000 and hasn’t looked back since. From 2003 other elements have infiltrated his music ranging from acoustic guitar to bowed cardboard boxes, basically anything that can make a sound. These, coexist with his use of field recordings and have distanced him from the industrial soundscapes that were part of his early practice. Since then things have become more minimal, rougher, lo-fi. If I were to tell you that he views drones as the most basic building block of music I think you might have an idea of where we’re heading. Name checks of Tony Conrad, Charlemagne Palestine, Eliane Radigue amongst many should confirm it. Throw in a smattering of glitch, minimal changes and you pretty much have it.

This is Sietse van Erve’s first ‘proper’ release (as opposed to CDRs) and the need to get crowdsourced funding can be added to the explanation for the hold-up in making it available. The title when translated to English is “The tragedy of a song writer without words”. The album was made using AudioMulch with some post-production editing being done using Reaper. Different techniques were used on each track and this is reflected in the atmospheres that are produced. Certain things like crackles, drones and long lines appear regularly in my listening notes but at no time did I sense that I was listening to variations on the same theme.

I must admit I am one with Orphax about the beauty of drones, the overtones, the minute changes within them. From such rudimentary building blocks heavenliness can occur. I’d defer from him in saying that it is the music I like to hear most, but only because it is good to have variety. He compares the genre that he is employed in to hearing the buzz of the distant city or highway whilst walking in a forest. Certainly drones are at the core of most of what we hear, some more brooding than others, assisted by the small details that help to generate the atmosphere.

Describing itself as ‘isolationist soundscapes’, the album begins with ‘Onder Het Noorderlicht’. It introduces itself with barely perceptible audio, that immediately had me checking the volume on my system. Not unlike an arctic soundscape in which we might hear ice cracking as it thaws, the grit and dirt which this sound provides runs through the track from start to finish. ‘Icelationist soundscapes’ anyone. Waves of lo-fi drones soon enter and develop, resonating and swelling, before exiting to leave similar sounds to those we came in with, drawn from pre-recorded samples and field recordings.

The next track is the antithesis of the first. Oscillations, pulses, drips and interference weave in and out of the gentlest of drones. All of this is steeped in reverb and feedback loops, leaving behind the brooding atmosphere previously experienced. ‘Samen Ann Het Water’, the third piece, had me mentally revisiting the glories of Harmonia’s first album. Long lines, gentle, peaceful, controlled feedback, work to weave a spell of magic. I felt as though I was in one of those gorgeous summer days in which you lie in the grass soaking up the atmosphere, not wanting to move, the buzz of a light aircraft heard circling in the distance.

‘Winterslaap In De Zomer’ has an ethereality to it, a beauty. Built on long organ-like drones, almost church-like, it had me wondering how close this was to some of Pierre Cocherau’s improvisations. Underneath you can just about catch a cyclic organ motif which you hope will gain more prominence, so as to fully experience it. These are joined by traces of electric guitar. My one reservation about the track is the sudden ending, it is such a bolt from the blue that I feel I have been short-changed every time I listen to it.

The glacial undercurrents of the first track are revisited in ‘Ochtendgloren Boven De Ijzige Vlakte’. A menacing character pervades the start, suffused in reverb. Arctic winds and ice cracks dominate before relief emerges in the form of an organ drone. Initially sensed underneath it becomes more prominent, resolving into a theme. Again Orphax manages to transport us to the Elysian fields. A moment of beauty before a return to the sparse, cold atmosphere from which it unfolded.

The last track Het Bos is another heavenly work. Created through self-synthesis in AudioMulch, it sounds like a chorus of air-raid sirens, although such a description does not do it justice. Long lines develop and come to the fore, punctuated by knockings, scrapings and synthetic bird noises. My notes also throw in helicopter rotors, the Tardis and motors. These die down to leave a spare ending.

With the work of Orphax we navigate the border between proceedings on a human scale and those at a more monumental level. Drones accommodate concentration on the inner detail, direct your ear to sounds that would be missed in more frenetic music. The forward momentum is sacrificed to focus on the internal activity, so that every minute sound can be savoured and gestures can stand out in foreground relief from the texture. The balance between stasis and movement within his music is ideal. Recommended for those of a drone disposition.