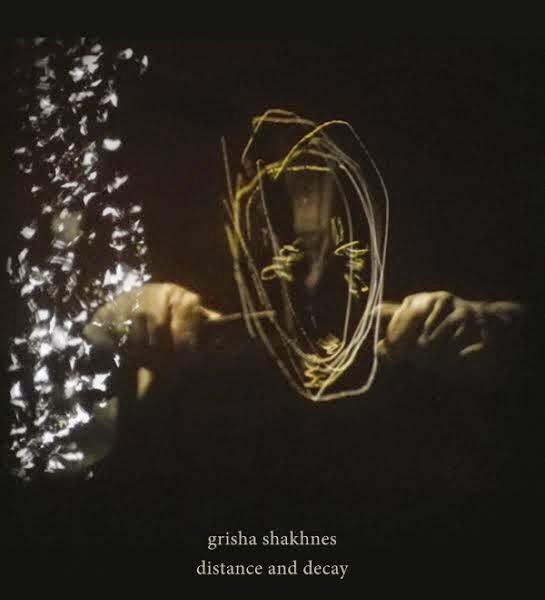 Grisha Shakhnes confronts us with the blurred sounds of muddy rumors from what sounds like a construction site, a full orchestra (though Survival Research Labs it is not) with a soloist “pop” happening regularly in the foreground, and a looped choir of assorted tools. Mechanical parts are engaged here, while in the background, the motorized mud is being imperturbably churned out : is it excavation? Repetition, accidents, irregularities, irruptions : occurrences.

Obviously, we get to hear time (distance) and matter (decay); repetition brings decay : successive hearings erode recorded time (recordings are time encapsulating space, or is it the opposite). Ceaseless movement is everywhere, obliterating those “tapes”, as the general mud clears out. Corroded signals are heard, throughout the marching cadenza of a smooth machinery. Which is no state-of-the-art construction machine but rather a primitive tool on wheels, wherein you can tell wood from stone, hums from blows, grain from mud. Signals play with noise, none wins : even.

This work sounds like a fascinating document, civilization-wise (here lies an assumed statement : tapes = past). Once again, then, the dig brings a find; “noise below” indeed. The busy site presented here is that of a massive dig, unearthing past facts, actions, gestures, probably methods : a culture.

But a HISSING link, for sure. Stuff being dragged, folded, shook up, particles, wind blowing : the heart of the matter ! Listening, we’re punching holes in the ground while ignoring it ! Tapes ! The act of listening is largely underestimated, these days (hearing is today’s fashion).

A swarm of birds can only sound as sinister, especially in a post-holocaust church, resonating with an endlessly self-played organ (probably a brick fell – and remained stuck-on the keyboard, the sustained cluster’s rumbling shaking the foundations forever).

This is music of wind and dust resulting from time and action. Repetition erodes, and that rain on metal underlines it. Wherever there happens to be wind, it competes with tape noise, signal being equally challenged by it. Hence the grinding storm : the document never allows to be forgotten, you’re a spectator and Grisha Shacknes never lets you forget it.

Sightseer ? A puffing blow opens it. Some raining follows and increases, a musical saw playing under that rain. Wind against the mike. Elevator, air, transportation, doppler phasing, rain ceases, or is it stronger ? Thinner ? An air-gun ? Pneumatic slow-motion ? Announcement ? Cut-up ?

LowNoise or LoFi, something ascends and descends, strangely muted… Then, focus : a sewing machine sending communication that suddenly aborts ! Waves, parasites, piercing feedback, scorching tunings, don’t touch that dial ! Seth Cooke plays with my hearing system as a conductor would, sometimes. Induces me into thinking I’m swimming amidst the traffic (not of vehicles but) of air particles, if ever such things can be, that shut off abruptly… to catch me later on, same time code !

Sometimes, atmospheric strings mean something else, and ambient guitar pieces mean different; and yes, it can be reflective, contemplating as notes drip from attuned these metallic wires, through electric devices. Many ways to. Hence these pieces by Lunt, summoning such a palette of settings, that you realize you forgot what possibilities these could offer, with a slight sense of drama. Lunt takes you for a quiet walk on shattered glass : violence is lurking, heavy masses never far away, giant waves of washing larsen invading your streets (and you get washed overboard, but the motion is so slow that you find the desperate time to enjoy it). The ambiance (as in “ambient”) is a dynamic one, never asleep, just : distinct or blurred. Indeniably, space develops and spreads forward. A devouring mammoth of distortions is unleashed, so powerful that it disintegrates in its own hunger. This brutal and lengthy episode is simply followed by melodic arpeggios delicately set upon an elegant cello-sounding drone. As before, loops of short patterns support the aforementioned elements, knitting a subtle and light living wall-paper. The “same” and the “evolving” object getting together as an ancient technique of telling stories. Lunt (Gilles Deles, cofounder of WeAreUnique) cooks up his music as a delicate chef, whipping opulent feedback as he dresses piercing frequencies upon it, and powders the construction with reverberating notes upon notes, echoing as a multitude as they’re already gone, while you’re still in the room.