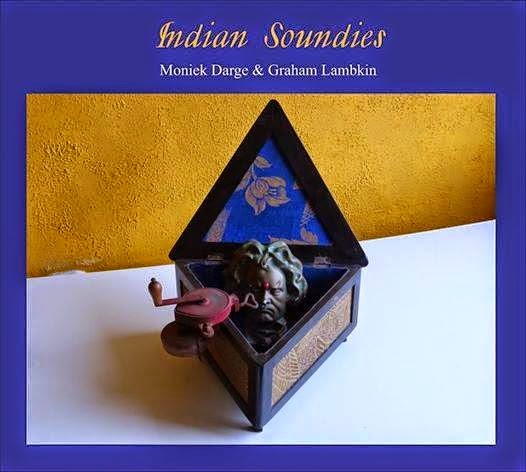 Belgian sound artist Moniek Darge and visual artist / musician / Kye Records label boss Graham Lambkin team up to produce four long tracks of soundscapes of their travels in India. Darge is particularly interested in recording and capturing her impressions of the spaces that have great significance for her emotionally, mentally and spiritually, and these are often spaces of religious and/or spiritual importance in the cultures she visits.

“Tamil Nadu” and “Ladakh” are solo Darge pieces based around religious ceremonies she observed. It probably would help some listeners if the CD had provided some details of the ceremonies and rituals whose music occupy much of these two tracks; most listeners who don’t have first-hand experience of India and its culture, religions and music would gain more enjoyment if they had some basic background knowledge of what is going on. Picking out which is sacred and which is secular on “Tamil Nadu” can be rather tricky. Then again, not having prior knowledge of the music and sounds can allow listeners the freedom to imagine and superimpose their own, perhaps rather stereotyped, ideas of what may be happening. Likewise with “Ladakh”, most non-Indian listeners will be at a loss to guess what is happening without the background cultural and religious context. It so happens that I know where Ladakh is and what is unique about it (it is home to the Dalai Lama and an exiled Tibetan community) and so I can appreciate the Tibetan Buddhist chanting and rhythmic music that feature here.

With the emphasis on religious music, I note that men tend to be dominant in religious ritual and observation, doing most of the chanting and playing instruments while women are restricted to following the men’s lead or singing in choruses. I assume this may reflect the reality Darge has observed, that women do tend to play a secondary role in religious worship in some parts of India.

Darge and Lambkin participate in creating “Indian Weather Trap”, a snapshot of a city scene experiencing constant rain and thunder. Cars buzz by and factories are noisy with workers and machines producing goods at a steady rate from morning to late in the evening. This is the most abstract and industrial track in sound and ambience. Much of the action seems to be taking place in a small machine shop. Lambkin’s solo effort “Therianthropy” initially is a very lively musical piece but much of it seems to be an observation of everyday activity overlaid by heavy rhythmic breathing noises made by an animal. The observer and the observed are connected through their common context.

Generally the CD is very low key and unassuming with music and found sounds linked or layered smoothly and quietly. Listeners feel that they are observing normal everyday life. Even the hustle and bustle of traffic seem quite muted and there is little frenetic about the traffic noises in the background. To get any value out of the CD, listeners need to use some imagination; what you bring to these recordings as you listen to them may be even more important than the soundscapes themselves. No two listeners will experience this CD the same way and no two hearings of the CD by the same person, will be the same either.

Some listeners might object to a recording like this, especially one with a title like “Indian Soundies” – it may come across as extraordinarily arrogant of two Westerners to make field recordings of the sounds and noises of everyday life in parts of India and label them in ways that make the country and its people look like exotic objects for the amusement of others – but I’m prepared to give Darge and Lambkin the benefit of the doubt, that there may be some element of naivety in the way they have put this recording together, and that they are sincere in wanting to share some of what they felt and experienced with others. I am not sure though that performing some of the music here in public (as in a concert situation which Darge and Lambkin apparently have done) is right.