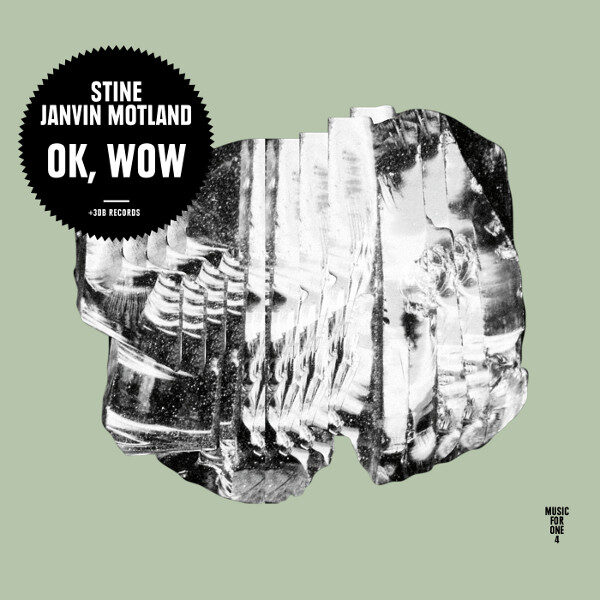 Having recently reviewed Building Instrument I am starting to wonder if Norway has become the reviewer’s version of Siberia. I only jest. This album only re-enforces what a vibrant, diverse music making culture Norway currently possesses. I know of some people who would dispute the term music in respect of this release, but not me. Recorded over two days in a wooden church outside Bergen, OK, Wow, is the third release in +3dB’s ‘Music For One’ series. Presumably recorded in single takes, you at times hear the elements pounding on the roof, as well as the moments in which the vocalist tries to recover her breathing after a burst of activity. Yes, if you had not realised already, this disc embraces the glories of the voice. All without uttering a word.

The first time I played this was driving at night time. I couldn’t see the cover or artist, just slotted the disc in. I happened to have as a passenger a highly respected singing teacher who I could see physically recoil as the first track emanated from the speakers. Kurt Schwitters came to mind. Revisiting Ursonate, I was surprised to find his vocalisations were more developed and prim and proper. [Track 01] is more earthy, this is Schwitters on a triple dose of speed. The syllables of Schwitters delivery are pulled, ripped, smashed, reduced to their most basic levels and mixed with the bodily functions of life. A flatulent Yoko Ono on helium is nearer the mark. I admit to hoping we would not get forty minutes of this, the cold sweats that Kurt and Yoko engender seemed a distinct possibility. Luckily, for me, and my passenger at least, it was passing like a ship in the night. Listening again I can apprehend it more analytically, knowing that the following minutes tread different paths.

Known for her creative use of the voice, Stine Janvin Motland leaves us in no doubt of the mastery she commands over the extended vocal techniques tackled here. These form the basis of her sonic vocabulary and she uses them almost exclusively. Shrieks, gurgles, and squeals have become her lexicon. The sheer range covered shows somebody who has thought about the possibilities of the human voice. The understanding that the voice, along with our body, are our main tools of communication. Motland gives us the voice as is, with the acoustics of the venue providing any effects. The imperfections are left for us to hear.

Central to her work is the concentration she brings to generating sounds and then listening to them develop. Acutely perceptive of even the slightest alterations in the sonorous qualities of the noises emanating from her body, she toys with the timbre, intensities and rhythms that are the foundations of speech. The miscellany of approaches taken in vocal production excite her, each displaying a different side to her musicality. There is a childlike joy in each phoneme, a thrill in the chase to articulate something that words cannot convey. In all cases, its about finding a vocabulary to communicate with, but one that comes without the strictures brought about by language. The ability to unfold over a period of time that she admires in the music of others, is viewed as important in her own.

On this release we can hear a solo voice, through improvisation, meet, respond, and fill a space. The locations she uses are chosen for the individual qualities they provide, and allow her to explore how the spatial resonances of each, influence the work produced. By no means is this an easy listen, challenging us on a number of levels from delivery to the question of what is music? The interplay of melodies and harmony, and what might be considered standard interaction with the materials, are absent. These have been replaced by long explorations of timbre and texture, which form the pivot on which her work revolves. At times, vowel and consonant spectra-shapes flicker in the rapid rhythms and colours of speech, at others, sounds are sustained for as long as humanly possible, providing the almost Gregorian lines of I and II. All emphasise the non-verbal aspects of speech structures. Her contrasting approaches over the six tracks, broad in their compass and mainly unorthodox in delivery, showcase her masterful sense of invention. Although in some hands this could produce a work which does not work as a coherent whole, with the overall focus on wider issues, such as form, she manages to dispel these fears.

Extended techniques allow her to explore a different form of music, by-passing the expectations of harmonic and melodic development. Avoiding the recurrent themes of a tradition that already exists, she strives to create sounds which are far from their established realms. Motland deals with the physical and acoustic properties of sound itself, fascinated by the details of the smallest and the spaces in-between. Like others, there is a quest to conquer the atomisation of sound and then to shape it. Separating the consonants from the vowels she can focus on the hissy noise quality of fricative consonants, the releasing of built-up pressure that comes with plosive consonants, and the lack of audible friction that comes with vowel sounds. Listening to Stockhausen’s Gesang der Jünglinge recently, it struck me how similar, at times, the outcomes were between the former and Motland’s work. Both play with the abstractions of speech in order to challenge and break away from the established means of communication. Both use the structures of language to generate their material and timbral dynamics.

The voice comes from the body, but traces much more. It is crucial to our identity, carrying with it our emotions and attachments. Speech continually negotiates between the symbolic, interpreted by cultural meaning, and how it is expressed. Ignoring language and syntax allows Motland the ambiguity to work unencumbered by assumptions. Sounds become mutable and transitory. Aware of the voice’s functions and limitations, Motland explores every tiny detail of this.

Our imagination seeks to impose a reassuring sense within the reverberations. The attempt to listen, and to understand the sounds as if they were speech, is a basic element of our daily soundtrack. As the endeavours to listen to the auditory signs, to decipher them, to interpret them fail, the raw essence of the human voice provides another type of code. The lack of context, precursors, assumptions and methods lead you to look for other levels of signification. The material nature of the sounds that come from the human body aid the ability to connect emotionally and subconsciously to Motland’s utterances. The act of listening is almost tantamount to witnessing the cleansing of the body through sound recording.