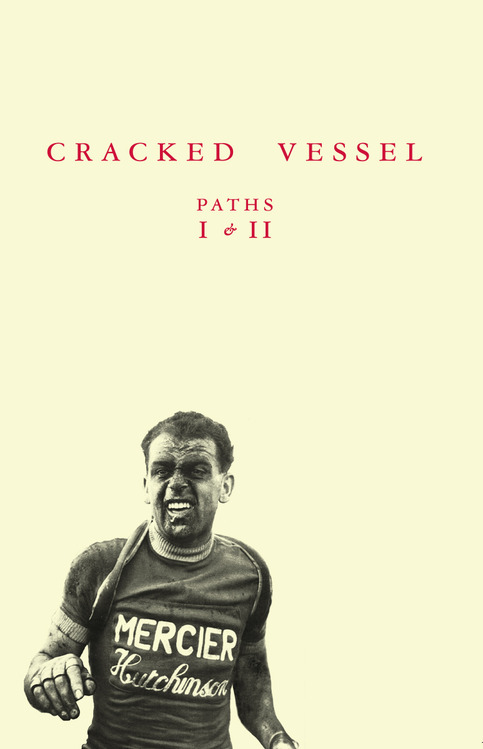 Of the various sports that could be celebrated in pop and rock music, the most surprising might be the one most associated with drug cheats: cycling. Some TSP readers might remember (or have parents or grandparents who do) those 70s/80s stadium rock stalwarts Queen with “Fat Bottomed Girls” and “Bicycle Race” (two of the, uh, not so renowned songs in that band’s repertoire) and their equally vintage Euro electro-disco contemporaries Kraftwerk who had a hit with “Tour de France”. Now it’s the turn of black metal / hardcore trio Cracked Vessel to offer up their cycling-themed debut album “Paths I & II”. These guys don’t just blabber on about the lure of two wheels connected by a chain devouring up the pathways and dirt tracks: in CV’s hands, cycling becomes a metaphor for discovering and following one’s true purpose in life while pedalling against a rising tide of social conformity and cowardice, with all the tribulations associated with being an outsider and a lone pioneer.

With such an eccentric premise, CV are wise to dish out their short songs in piecemeal fashion on short cassettes rather than ride roughshod over listeners with 1-hour marathons bashing the bicycle harder than an army of evangelical Christians bashing the Bible. Even without the one-trick two-wheeled pony, the music itself is perhaps best savoured in small bits: we’re talking here about a tough and hard-hitting punk BM monster with pile-driver drums. Too much of this crush coming all at once in excess of thirty minutes and listeners will end up seriously flattened with more tyre tracks over them than a 300-cyclist pile-up. The musicians forge ahead banging up heavy rhythms that turn into huge thundering slabs of skull-cracking sonic immersion while lead guitar squeals and howls and raspy voices rage through the dense storm. The music keeps packing in loads of machine-gun blast-beat percussion, sweeping riffs, haywire feedback and bewildering changes in rhythms and time signatures. On one piece “Ingesting the Malevolent Entropy”, there’s even room for dark atmospheric industrial drone mood creepiness. “Paths II” finds space for a little experimentation with solo guitar industrial drone on a side that would otherwise be solid blasting punk BM.

If you love raging no-nonsense minimalist hardcore punk BM that leaves you feeling more wrecked (but happily so) than a rush-hour 6-lane smash-up, you are in serious need of this album. How much you need it and how the album will change your life, I can’t say but if as a result of listening to the music you decide to ditch four-wheeled gas guzzling for pedalling the metal, you seriously are travelling the path of Cracked Vessel.