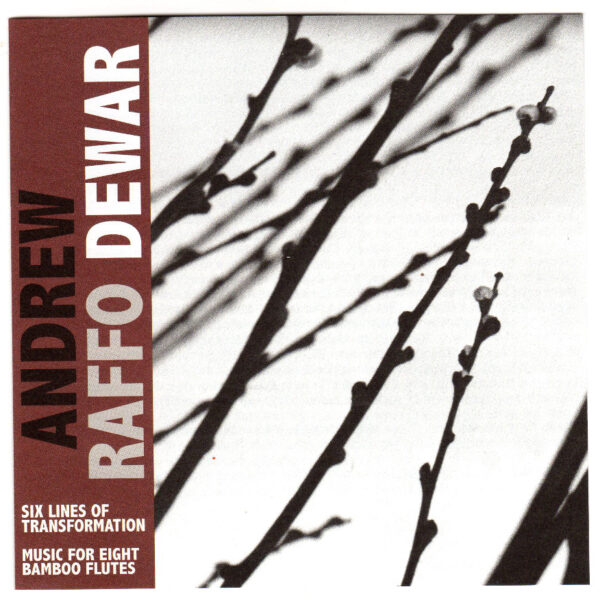 Left field U.S. jazzcentrics Porter Records have opted for a less frequented genre change with yesteryear’s habituees of the loft and obscure smokey clubspaces taking a breather (non-cyclical), in favour of Argentinian avant composer, Alabama University prof and ethnomusicologist-about-town: Andrew Raffo Dewar. A student of Braxton, Milo Fine and Luier A., who has also collaborated with Bill Dixon, Gino Robair and a host of others. His debut c.d. showcases a rather engaging and at times challenging pair of long-form pieces in which dismembered strands of melodic info are matched with soft focus, hypnotic dronework.

The title track finds A.R.D. in a writer, not a player, role and is instead guided by the pointy white stick of Matthew Welch. One notable under his all-controlling eye being minimalist trumpeter Nate Wooley (see produce on Pogus and Carrier Records), whose approach here eschews his usual grab bag of post-production adjustments for a straighter, purer tone. All the sleevenote’s talk however, of ‘palimpsests’ and ‘transformed processes’ really comes on as excess salad dressing, as getting the measure of Six Lines… is pretty straightforward. We’re politely greeted by a septet with the light touch of marimba, bassoon and bass clarinet to the fore, running through the archetypal and all too familiar, up and down the scales warm-up exercise and is, over its near half hour duration, stylishly dismantled (and still scored?) via some Martin Küchen-like wheezings and ersatz ghost in the machine creakings. The initial parp and tinkly bonk recital now rendered a somewhat hazy smudge on the horizon.

Track the second (and last): “Music for Eight Bamboo Flutes” collates the combined lip action of four Indonesian and four North American composers (including A.R.D. who has studied/performed traditional Indonesian music for twenty years). Recorded in Bali, Indonesia and infiltrated by insectoid chatter (it’s the Cicada Gang!), the lengthy tendrils of single melody have an ancient, dawn of time quality, sounding as if all of the notation was recovered on stone tablets by some more obscure contemporary of Lord Carnarvon and then reactivated a century or so down the line. And, at a forty mins, twenty-six stretch, my only (near) reference point – Phill Niblock’s Four Full Flutes (XI Records, 1990) – is left spluttering by the wayside. Perhaps that insect audience mentioned previously is actually applauding the flute octet’s unflinching tenacity instead?

Andrew has also released Interactions Quartet (on Rastacan) and is also to be found in a supporting role on Jonathan Chen’s Quartet Solo Series, Volume One c.d. on the Striking Mechanism label.