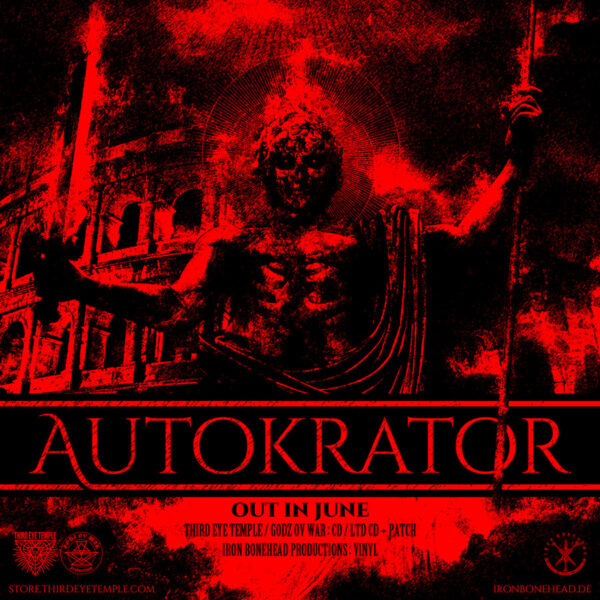 Autokrator are only very new but already they have released their self-titled debut album. Autokrator is a heavy, grinding tour through some thick industrial / death metal music territory though if you peruse the lyrics, you discover the band’s concerns revolve around the emperors of Ancient Rome and their unlovely behaviour of astounding excess and corruption. Though the band has a great sound, and there are few like these guys who simply steamroll their way through the album, leaving everyone and everything flattened into tortured schnitzels behind them, the songs themselves are repetitive and monotonous. The album is basically a case of “hear one song, hear ’em all”. Rapid-fire tribal-like drumming, tombstone-crushing bass, whistling wind in the background, deep-throated gravel voices: all reduce each and every track into variations on a narrow theme. The only track that is different from the rest is the title piece which is a spoken-word diatribe against a solemn repeating martial drum loop.

After that little speech, we’re thrown back into the massive concrete sausage-machine grinder and from then on there’s simply no pause or detour from the relentless crunch and grind. Thickened lava sound crushes your eardrums and brain cells and leaves them all a pathetic plasma mess. The crushed-gravel vocals roar over the ongoing churn-around while thudding drum beats measure out the devastation. While the musicians might have started out with the best intentions for each and every song, the seismic death industrial style turns the tracks into thick miasmic slurry in which melodies and riffs are hard to find, and lyrics all but buried under layers of hot burning mantle.

I think the big problem with this album is that the songs simply pick on some of the worst Roman fruitcake rulers and detail their exploits without linking them all under a definite theme about how these leaders contributed to the empire’s eventual demise with their bloodthirsty greed, lack of restraint and disdain for the people they ruled, and how they set a poor example for others to follow and discredited Roman values, institutions and culture. That’s even before the Huns and Goths arrived at the boundaries of the most far-flung territories in central Europe. If you know nothing of the history of Ancient Rome, or even if you do, you’ll find this album very boring.

Autokrator will need to rethink their approach if they’re to be a long-term proposition: they have an excellent crushing industrial sound but it’s possible that too much of a good thing could sink the whole project.