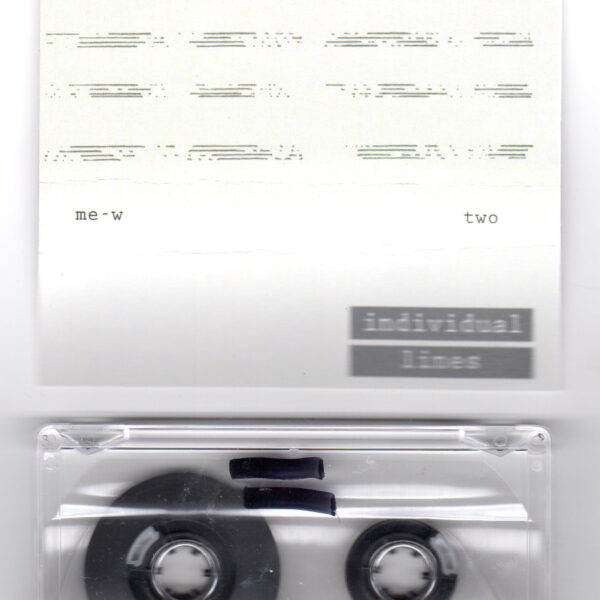 me-w has a cassette called two (INDIVIDUAL LINES 014) which contains I think four separate process-y pieces which he made with his violin and electronics. At start of tape it seemed this American fellow was emulating those European improvisers who put a lot of effort into disguising the natural sound of their (acoustic) instrument; as if to say, nobody must ever know I am playing a saxophone, whatever the cost. Even so, some snippets of recognisable violin plucking did surface now and again in this suite of what I guess was largely concocted from edited samples, stitched together with infinite care to create a continuous effect of disjunctive non-musical stabs.

For remainder of tape me-w – Morgan Evans-Weiler to his immediate family – turns in something that is slightly more familiar as violin playing, for instance the lengthy drones that close the first side. Boy, are they lengthy…he doesn’t know when to quit, and somehow manages to leech any passion or feeling from his interminable playing. John Clyde-Evans sure ain’t losing any sleep tonight! So far it’s as if he’s conducting a weird and sterile laboratory experiment, rather than laying down an album of sound-art or music. I’m happy to endure a healthy stretch of boredom in the name of art, but I need a little more to sweeten the deal than some light-touch filters and phasing applied to the strings, else I feel I’m merely being invited to explore a process just for the sake of it.

Things cohere more on the flip, particularly for the final piece which is a complex “epic” combining studio effects, violin drones, edits, and live electronics (I am guessing wildly now) into a restless white canvas teeming with abstract grey shapes. Some of them almost tangible or edible, like forest mushrooms. Still not feeling the emotion from the Morgster himself, but I’m beginning to suspect he’s deliberately put his heart on the chill setting for this release, the better to showcase his near-pristine methodology. Deliberation and steady nerves are needed to assemble these frayed nerves and flapping tendons into something that doesn’t look too much like The Visible Man. Preceding this, an astringent (and then some) collision of resonant string harmonics and jarring mixed chords that almost cause permanent retinal damage and sagging foreheads among lab rats. The sort of drones that make instant cottage cheese out of the contents of your fridge. Try it and see. According to his website, Evans-Weiler is aiming to “explore the realms of attention, stillness, stasis and listening” and also to investigate the properties of space as well as sound. Arrived 3rd November 2014.