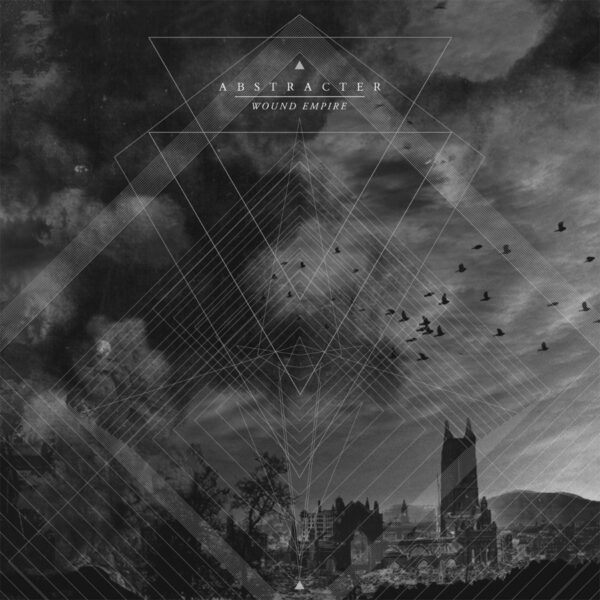 Abstracter: what an intriguing name for a band of any description and genre, let alone one that plays a fusion of black and sludge doom metal. You can imagine all distinctions between black and doom dissolving into a formless black monster of sheer power. With a name like that, the group would also have a pessimistic view of the world as it is, and look towards a collapse of present-day structures, beliefs and ideologies into one void. Melancholy and gloom would constitute their default outlook as everything around them in daily life falls into a downward spiral, just as they – and the rest of us, in fact – predict.

“Wound Empire”, the band’s second album, conforms as we expect but the band does offer a few surprises. “Lightless” rises out of the deep murk slowly, steadily and most emphatically with pounding drums, cavernous guitar drone echo, bass grind and deep vocal groaning reverb. There is a definite bass groove that might surprise a lot of listeners just by its pop-friendly presence which imparts a feeling of unease and sense of impending misfortune as well. Our misgivings are rewarded when the song takes a turn onto the blackened path and the vocals become more definite and raspy. Equal parts churning-grinding sludge doom and catchy black crust thumping groove which gets thicker and grittier as it goes along, this song deserves every moment of its nearly 11-minute duration in the sun.

There’s not much change from the first song to the next, “Open Veins”, but then the album (probably) isn’t so much about the songs as it is about generating a particular mood and outlook that suffuses the whole recording and engulfs listeners, drawing them into the universe that beckons within the music and which sustains it. “Open Veins” may have a slightly cleaner sound and a faster, more urgent pace but it has just as much power and anger, and the inhuman force that lurks beneath the music is coming closer and developing a definite presence and form. Bass melody introduces a questing feeling in the despair and angst. The song opens up beautifully with trilling lead guitar in its later moments and though it’s the shortest track (at just under 10 minutes), it seems so complete and contained that it’s neither too long nor too short but just Goldilocks-right.

As the album continues, the tension and power build gradually and relentlessly, leaning more on the musicians’ sludge doom inheritance than on their black metal tendencies. They’ve obviously got something in store for us, something dark, bleak and powerful at least, if not life-changing and thunderous. As it turns out, “Glowing Wounds” has something from each of the preceding songs and more besides: an even more downbeat, anguished outlook, an extra layer of crust, filthy inhuman vocals and strong surging music of clean lead guitar, bass rumble and bluesy rhythms. The song bears its listeners along on swelling rhythms that become choppy and takes them into another dimension altogether.

The album lasts about 40 minutes but these may well be the best 40 minutes you’ll spend this year. The album may not be perfect and you’ll probably come out of it feeling groggy and disoriented, needing another 40 minutes to return to Earth – but for sheer mind-altering effect and mesmerism this recording is hard to beat. There is so much power and feeling here, and so much despair as well, it’s just so overwhelming. When eventually we must all descend into a mass nuclear bunker or are rounded up into concentration camps, I’ll have to take this album with me as a soundtrack for my final days.