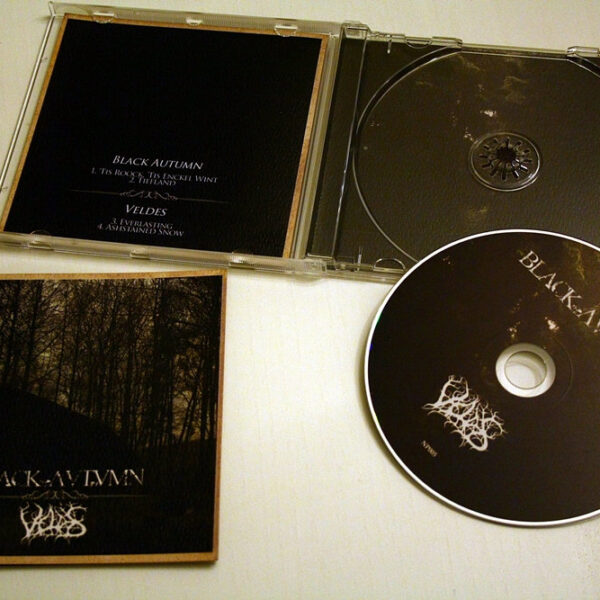 Both Black Autumn and Veldes are ambient BM projects from Germany and Slovenia respectively so we can expect music that’s equal parts aggression and atmosphere that evokes a variety of mostly negative emotions and moods. Black Autumn, coming first, does not disappoint with his two offerings. A lonely plaintive introduction that tugs at the heart strings pulls this listener into a raging storm of tough, gritty tremolo guitar shower-falls, cold cloying, suffocating synth drone cover and pounding percussion. For once in the total history of music, the heavy-handed keyboard playing actually works in helping to create a dark smothering, choking world of gloom and negativity. Everyone must flock here to see how muddy production and clunking music can actually create a good work in the right context and learn something from it. Second track “Tiefland” brings in a creepy organ and dark guitar blues into the dark murky mix of ambient BM / doom that develops into an overwhelming howl of despair with hysterical lead guitar over the percussion clunk.

Veldes’ side is dominated by piano playing over a more subdued soundtrack of repetitive depressive tremolo guitar growl and basic percussion. While the actual riffing is good, and the sound is balanced between tough and hard-edged on one hand, and pained on the other, there is far too much monotony over Veldes’ half of the split, and there’s not enough attention given to creating and maintaining a distinct atmosphere that would distinguish Veldes in a more general way from atmospheric BM.

If this split is typical of the two acts’ styles, then I  wonder how Black Autumn can have escaped notice for so long. The project has been active for 20 years and according to Metal-Archives.com he has quite a large discography of demos and full-length albums as yet unreviewed. His BM / doom fusion music here combines dark seething anger, blues-flecked melancholy and sorrow, and occasional (if all too brief) wistfulness in a very potent and powerful brew. Veldes on the other hand is drowning in too much boring repetition and I’m really sorry not to be able to recommend this split recording wholeheartedly.