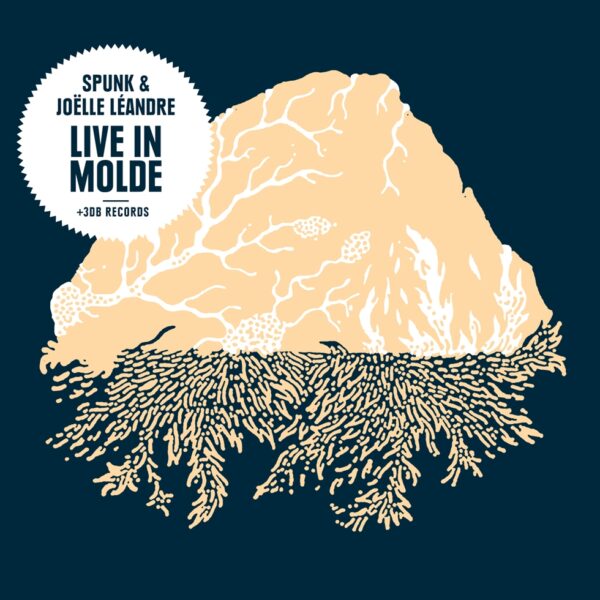 The all-women Norwegian performance / composing / improvising troupe Spunk last noted with their 2014 Adventura Botanica record, where their lightning-fast responses were put to the test in a live arena with a dancing man in an elaborate stage setting full of sculptures and lights, to create a unique concept record about Charles Darwin and evolution…what could possibly improve on that? Their Live In Molde (+3DB RECORDS 021) record also came out in 2014, and this outing is a team-up with the noted bass-playing improviser Joëlle Léandre from France, here acting as the “Fifth Beatle” in the Spunk proposition and compensating for years of gender imbalance in the masculine-dominated world of free improvisation (especially in the 1960s and 1970s).

Léandre is a figure of inspiration to the four younger Spunk women and it must have been a fulfilling occasion for all when they played together previously in 2008. If you want the exciting sound of the entire team playing, there’s over 40 minutes’ worth of inventive and astonishing music on offer (plus an eight-minute encore), while the rest of the album is fleshed out with two bass solos by Léandre and a 12-minute Spunk set. It’s an inspired team-up…all the things we enjoy about Spunk are here, the highly unusual sound-combinations, the speedy and nimble responses each performer gives in the live situation, and the near-complete absence of free-improvisational cliché in the work. It’s not just the lack of call-and-response cliché, but these girls know how to build a piece so that it has shape, a start-to-finish process, even if the finished shape is bulbous and gaseous.

Léandre (probably familiar to many listeners from her FMP album appearances) may be coming from a slightly different place, but she not only fits into the overall nebulous scheme of the Spunksters, she somehow manages to prop it up with her creaky bass tones and ultra-speedy darting stabs, sweeps and plucks. Her two solo spots are great, but couldn’t we also say they are just a tad too oriented in the setting sun of classic jazz modes, and feeling a little dated next to the futuristic mind-meld globby emanations which Spunk manage to produce so effortlessly. We might, but it still wouldn’t harsh the experience. In all, a winning creamed-up splatterfest of droney acoustic instruments, human voice, electronics and free improv, passed through the gigantic warping devices of alien sky machines. July 2011 recordings made at the Moldejazz Festival. 6 panel digipak with synbolic artwork in glorious tones of flesh, black and ocean blue, suggesting hidden resonances between trees, plants, mountains, roots, and the sea. From 5th January 2015.