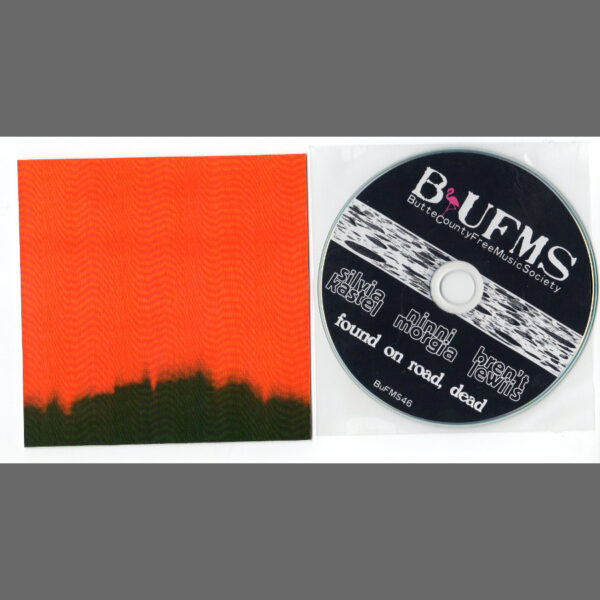 Butte County, California, is a district located in the Central California Valley north of Sacramento, blessed with outstanding natural beauty and “countless opportunities for recreation in both rural and urban environments”, according to the official website. It’s also home to a secretive cabal whose idea of a recreational opportunity is the production of weird noise music. Welcome to the world of the Butte County Free Music Society.

First up, a collaboration between visiting Italian improvisers Kastel and Morgia and local duo Lucian Tielens and Gnarlos, in their Bren’t Lewiis guise. The accompanying BuFMS bumf describes it as an “awkward thwack marathon of crumbled guitar noise, otherworldly howls and stuff falling downstairs”, a description that I can’t possibly improve upon.

As if in answer to my previous peeve about the vagueness of the term “objects”, here we’re given a detailed list of the things the quartet used to create all this noise – a bag of plastic Easter eggs filled with coins, for example. In addition, they seem to have used the fixtures and fittings of the “inconvenient cavern” in which the whole thing was recorded, so lighting fixtures, packing tape, cardboard boxes, pipes, conduits, brooms and dustpans all make it onto the list. Guitars and electronics are also involved.

All of this cheery mayhem is distilled into one long track, so if it sounds like your sort of thing, there’s plenty of it. Interestingly, the CD player in my car didn’t like it all, and kept spitting it out, like a chunk of broken filling. Somehow, I think the participants might see that as a sort of compliment.

Lucian Tielens pops up again on the CD from Serious Problmz, alongside Thor Heglund, Felix Mace, Mark Evans and Dave (nobody remembers his last name, apparently). Here, guitars, drum machines, wooden flutes, kazoos and the inevitable “objects” are deployed in the creation of 14 tracks of freeform racket with titles like “Reverie of the Forgotten Brontosaurus”.

It’s all quite unhinged and silly and it sounds like everybody was having a great time, bashing away at manual typewriters (what a strangely comforting sound that is) and ranting about farm animals that “look like you” and so on. I have to say that it was probably more fun to make than it is to listen to, but you know, I’m glad they enjoyed themselves.

Felix Mace’s solo recording Boundary Situation has a rather darker provenance, being produced in response to a course of chemotherapy treatment. As Mace explains, the drugs he’d been prescribed had the side-effect of making most of his creative outlets feel unrewarding, with the sole exception of sound – “the only thing that felt good in his head”. This led him to delve deep into digital audio production and editing. Here are the results, five long tracks of bad-trip electronics, effects, loops and samples.

Proceedings kick off with a jaunty little lounge band number, which plays just long enough to lodge itself in your head before it dissolves in a genuinely startling burst of noise. From here on in, it’s a descent into the underworld, where spirit-voices recite clinical instructions and nameless machines fizz and howl. The package comes complete with a piece of surgical gauze and a collage of Barbra Streisand, transformed into an Arcimboldo sea-food and chicken-leg goddess. Just in case you weren’t freaked out enough.

Mace describes this as “a personal exploration of mental, emotional and physical responses to cancer and treatment”, so while this can hardly be called a comfortable listen, it is a fascinating and very moving one.