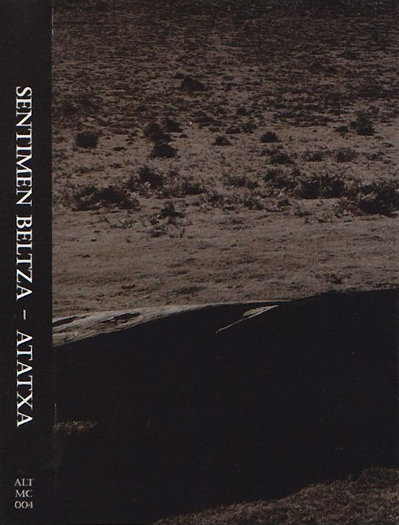 Sentimen Beltza is a one-man black metal project helmed by Oindurth SaVinitta (hope I got that right) based in northern Spain, in the Basque country. I’ve only heard of this act just very recently and don’t know any of his past recordings apart from the release under review. At just over 24 minutes, this recording is a good starting point to become familiar with what Oindurth has been up to with his pet music project over the past several years and where he’s at now.

On the whole, “Atatxa” is a raw minimal old school BM recording, very melodic in style, and highly aggressive in mood. The vocals are sandpaper-scrapy and filled with rage and hostility. Songs are usually fast to medium-fast and boast plenty of aggressive and catchy riffing. They are distinct from one another as well, with definite beginnings and ends, and in-between these extremes there’s much intense aggression building up to a climax. The music really sounds as if it’s being performed by a tight unit of musicians, not one all-rounder, which is a credit to Oindurth’s skills as a musician and producer. On top of that, the songs have a definite melancholy mood even though the production sounds as if Oindurth didn’t actually set out to create mournful or atmospheric music.

The rage and energy continue all the way through the EP, along with the underlying sadness. Each succeeding song sounds better than what came before though if they’d all been ordered differently, I’d probably still say the same thing! As each song has its own merits, finding a track that stands out and above the others becomes a matter of personal preference. If I had to pick one track that typifies the EP, it would probably be “King of Misery” for its roller-coaster ride through intense emotions and music that demands close attention and which rewards it several times over with strong riffing and melodies, anguished harsh screaming and consistently good musicianship.

“Atatxa” is worth hearing out if you’re keen on straightforward minimal black metal with a harsh raw sound and an emphasis on melody and good songwriting.