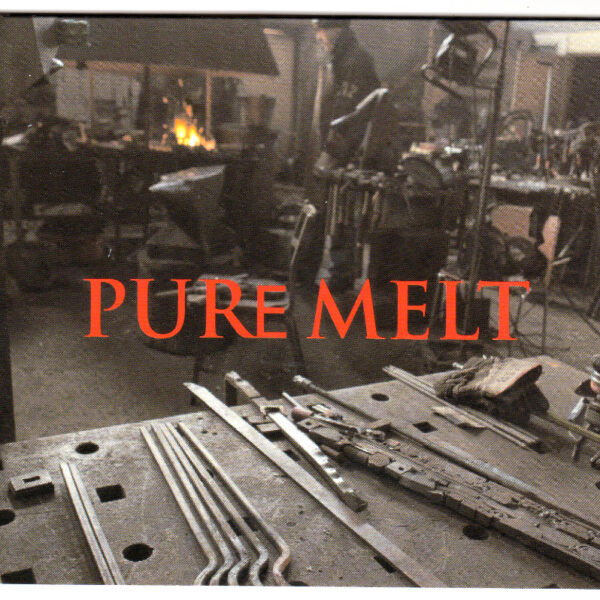 Splendid record of avant-rock trickiness, intelligent noodling and wistful brooding sounds from Japanese guitar-bass-drums trio Melt on their debut album Pure Melt (ACCRETIONS ALP057). If you remember the mid-1990s, it looked like Japanese loud psychedelic guitar rock was poised to take over the known world in the form of bands like High-Rise, Mainliner, and Musica Transonic throughout those “heady” days. Matter of fact the bass player here, Jyoji Sawada, was in such a band – Base of Fictions, represented for instance on the Cosmic Kurushi Monsters comp from Virgin Records. I have no idea why I brought that up, since Melt are not especially psychedelic, nor especially loud…but then again they are capable of generating fascinating and mesmerising rock-ish rhythmic music as shown on cuts like ‘Advance’ and ‘On The Prowl’, where guitarist Takashi Ueno (from Tenniscoats) is riffing into infinity like Jerry Garcia grafted with the tentacles of three separate octopuses. To my mind, Melt do sometimes play with the same near-insouciance of The Grateful Dead (a stance which conceals their craft), as if they could carry on forever like a perpetual motion machine with all moving parts locked together like a precision watch. A watch made out of rubber, that is. ‘Zephyr’ is another example of Garcia-inflected finger-picking, loping along almost like 21st-century bluegrass; and ‘Bed Of Straw’ is their interpretation of the blues idiom, all slide guitar and minor chords, but drenched with the sort of intense and melodramatic sorrow which I also associate with (for instance) Fukuoka Rinji and his rain-sodden, long-shadowed duets with Michel Henritzi.

On the other hand, they also explore more uncertain and forbidden waters in slow pieces like ‘Langour’ and ‘Was It Just Yesterday’, where suddenly the guitar notes are uncertain and hesitant, expressing melancholy longing instead of confident bravado or joyful abandon. It’s on these spacier long tracks that the percussionist and synth player Marcos Fernandes – despite what his name may suggest, he was born in Yokohama – proves his worth and is key to underpinning the mood, providing ambiguous abstract backdrops from scraped cymbals or queasy electronic drones. By the time we get to ‘Still Waters’ the band have almost lost themselves in this introspective mode: Sawada’s piano traipses uncertainly around a skeletal landscape, the guitar is doodling listless shapes, and all seems set for a Sunday afternoon of snooziness until Fernandes decides to take the dog for a walk. In short, a strong album of good rhythmical instrumental music where the skills of a good drummer add weight, heft and substance to the wispy noodling elements. Melt have been a trio since they bonded at a live performance at an experimental music festival in 2012 and this is their debut record; they recorded it very quickly, which is another plus point in their score book. Notice the very nice front cover, which at first sight I mistook for a cluttered recording studio; in fact it’s a blacksmith’s forge. How much more “metal” could you get?! Arrived 10 April 2015.