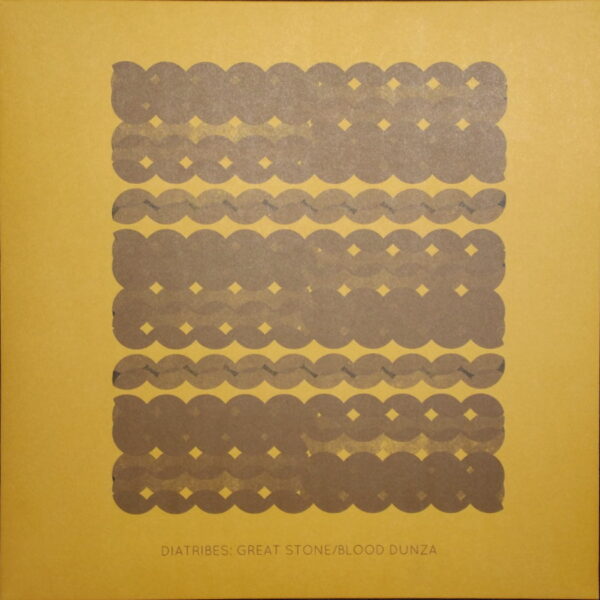 The Geneva duo Diatribes (Cyril Bondi and D’Incise) have made a fascinating new record called Great Stone / Blood Dunza (AUSSENRAUM AR-LP-003). I played it “blind”, and wondered what the heck was going on to result in such a heavy, centred piece of minimalistic drone, constantly underpinned by a slow but solid rhythm. It comes and goes and like waves of energy washing up on a shore of calm stillness. Pauline Oliveros and her Deep Listening philosophy re-enacted by obscure beach-dwelling tribesmen. After a time these waves of energy feel more like they’re beaming in from outer space. Sign me up now as a convert to those idiotic theories that suggest our forebears were all ancient astronauts. I can feel their messages engraved in the cosmos after all.

As I listened, I wondered if D’Incise had taken another experimental path (God knows they try out enough new things in their highly percussive careers) and become a “virtual orchestra”, one of those internet music endeavours where physical people never meet up in the same place and the music doesn’t even exist until enough laptops in the central hive are connected and can start beaming in the samples to each other. Completely wrong, as it turns out. The LP in fact comprises two “deconstructions” of classic Dub records from the 1970s, possibly involving King Tubby’s work. Probably the duo produced this through extensive reprocessing in their computers, taking the notion of varispeeded and time-shifting to an extreme degree. There is much talk of stretching, echo, delay, and tape ghosts.

It makes perfect sense now…no wonder the rhythm is so steady and assured, even if it does deliver its healing powers at 100 times slower than normal. Just goes to show you can’t beat the power of Jah, even when you’re Under Heavy Manners…a strong experiment, but I also wonder if it really “needs” to be LP-length, when the same point could probably have been made on a concise but intriguing seven-inch single. From March 2015.