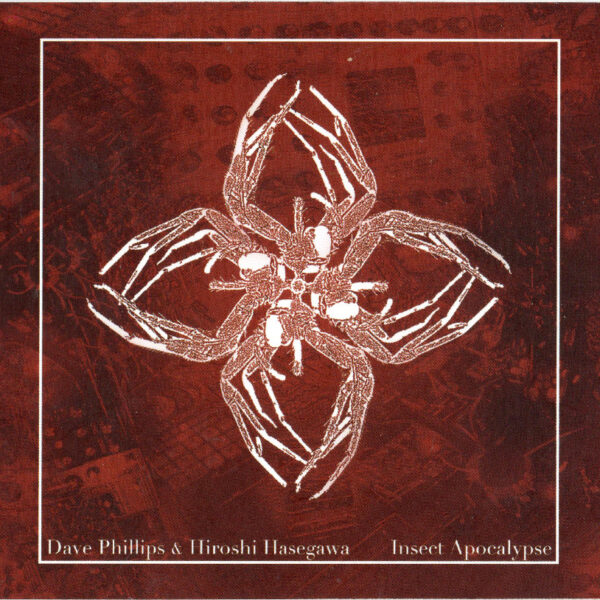 On Insect Apocalypse (MONOTYPE RECORDS MONO085), we’ve got the team-up between Dave Phillips, the radical Swiss experimentalist who believes in going too far in everything he does [1. Even the act of buying a daily newspaper is turned into violent performance art for him; his arrival at the local newsagent spreads consternation among the staff.], and Hiroshi Hasegawa, the notable Japanese electronic noise-fiend from C.C.C.C. and Astro. It has its origins in a meeting of the pair at the Lausanne Underground Film and Music Festival (LUFF) in Switzerland some three years ago, where the organisers were calling for Swiss-Japanese collaborations. Work began in the studio, then grew into a live performance, with the two musicians working on editing and processing tapes and sounds. Dave Phillips brings his field recordings of insects, captured in various Asian countries over a ten-year period, and Hasegawa is credited with adding “filters and effects” to these.

That story doesn’t begin to account for all this teeming horror. The result on disc is six intense episodes of noise overload, where the layers of processing create an unreal and nightmarish atmosphere, and the sounds of insects – multiplied into infinity, it seems – keep breaking through the artificial surface, whether we want them to or not. I certainly don’t, and if you share my fear of spiny stick insects, you’d be advised to keep this frightener away from your home.

The very title of the release promises a spectacular end-of-the-world scenario; the sound delivers that with dividends, as do titles such as ‘Hexapod Retaliation’ and ‘Anthophila Genocide’. The threatening vibe is picked up by Shizuo Uchida’s artworks, which exaggerate all the nastier aspects of scary insects, and frames them against fields of blood-red, fiery death. It’s a dynamic record, though; we don’t always fetch up in the midst of an unstoppable insect Hell, and often the greatest tension and emotion is generated by this album’s quieter, creepy passages that presage imminent catastrophe.

This isn’t the first time that Dave Phillips has recast the insect and animal kingdom as the enemies of mankind. Readers may recall the 2010 LP Mutations which he made for the Belgian label INI.ITU, with the help of renegade scientist and painter Cornelia Hesse-Honegger. Two 18-minute suites layered together reprocessed field recordings, portraying the world as a horrifying swamp of doom. Insect Apocalypse takes the same ideas to an even scarier place. What a troubled individual Phillips must be…quite a contrast to Francisco López, who has visited and recorded similar if not the exact same locations, and whose calming releases indicate he has a far more positive take on these teeming pools of life. From 12 May 2015.