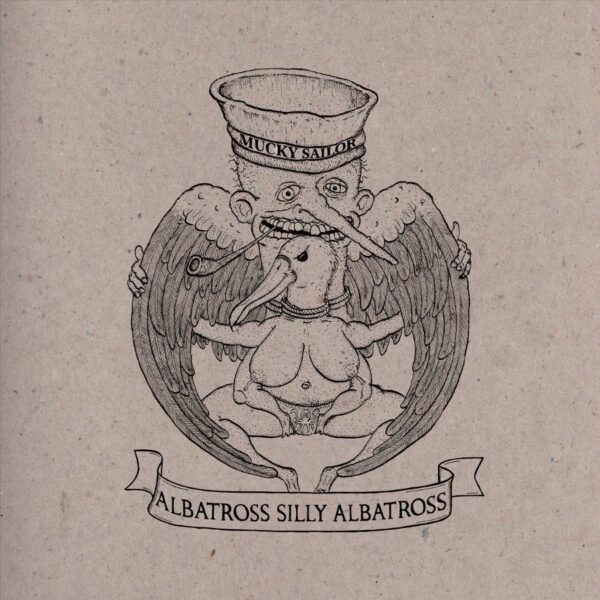 To my mind, the archetypal mucky sailor would regale his audience of inquisitive holidaymakers/locals with tales of as to why, in some areas of the U.K., sailors acquired the name of “Skates”. Inter-species liaisons? Now that’s mucky! In the real world however, the real flesh’n’blood Mucky Sailor is a two-piece outfit comprising organist Gus Bousfield and drummer Steve Nuttall, and are firmly entrenched, sea-starved and land-locked, within the confines of the Leeds underground.

In a live setting, they really must be quite a spectacle, as the duo apparently dress in naval rig-out while Bousfield sways about like a loon, with a hand-crafted ships wheel oscillator, creating a sea-sickness-inducing tableau of life on the raging sea. On record though, Albatross… which appears to have Coleridge’s “Rime of the Ancient Mariner” as its theme, is a cranky slice of no wave art funk, headed by Gus’s ultra heavily distorted vocal blather’n’spume. Its creaking timbres made gloriously ragged around its fringes by a motley collection of brass and woodwind mouth-breathers, operating under the name of ‘The Muckestra’; their wild and free horn salvoes bringing to mind a loud report or two from The Laughing Clowns (Ed Kuepper’s combo – Post Saints). The ‘B’ side “Beefy Bells” (The Bells of Beefy) lets slip another facet of the M.S. persona, the near gregorian backing vox giving the piece a distinctly doom-laden europrog edge.

‘The Club for British Musical Eccentrics’, situated in an alternate dimension Pall Mall, seems to have had its exclusive membership increased by two; Gus and Steve now finding themselves in the company of luminaries such as Renaldo & The Loaf, John the Postman and William B. Strickland.