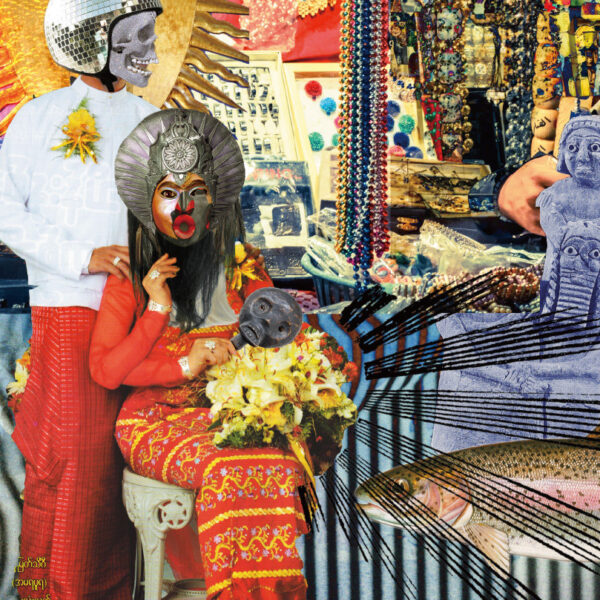 Long overdue notice for this fairly overpowering vinyl LP of psychedelic ultra-Techno drum’n’bass hip-hop material from Fallopian Disco Force, a “collective” of strangely-named Japanese players who do it in the Shinjuku district of Tokyo and have been busy burrowing away at their craft liked crazed termites since the late 1990s. If information provided with Black Larvenroller (ILL YACUMAMA RECORDS IYR-LP001) is correct, they were a trio at time of writing called H.S. Love Hennessey, DJ Memai and Moro; they combine fierce electronic eruptions with delirious turntabling technique and relentless live drumming. I was immediately struck by the resemblance to Boredoms, although FDF are straining hard to come over as even more demented and unhinged than the comparatively serene and trippy psych-drumming episodes of Vision Creation Newsun, Super Ae and other Boredoms records from that period…they also draw inspiration from hip-hop and modern ethnic musics (Turkish and Asian), and have played live with famed Japnoise bands such as Government Alpha, Ruins, and Melt Banana. 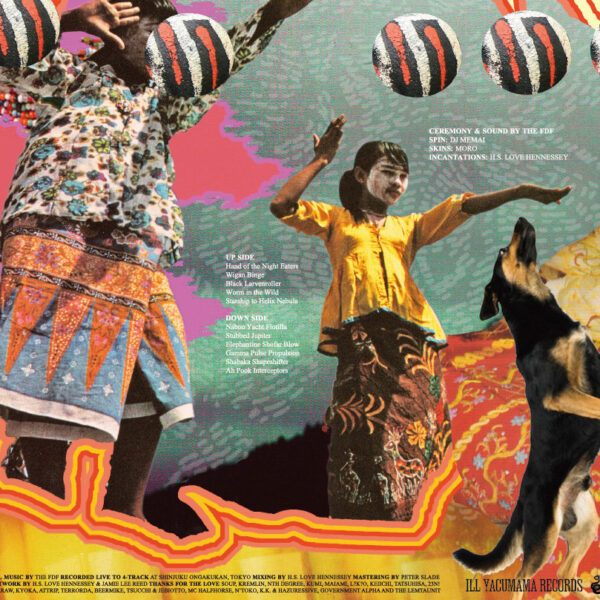 There’s a lot to love in these high-energy firebomb bursts…the live drumming of Moro is particularly strong and enables FDF to deliver more mileage per square root to their Napalm explosions than a drum machine or sequencer, and the electronic knob-twiddler Hennessey is having perpetual orgasms as he sprays analogue splurge over the arena like so much extinguisher foam…meanwhile all manner of exotic spice and stew ingredients leap forth from Memai’s diamond-encrusted wheels. The surreal, science-fantasy track titles are enough to send the reader’s mind spinning into another galaxy, and the intense colour collage sleeve art by Hennessey and Jamie Lee Reed is like an Electric Miles LP that never was, fully encapsulating all the mystical ceremonial elements they wish to invoke through its rampant, irresponsible use of symbols and textures. Like the music, it’s overcrowded; if anything, there’s far too much going on, and it’s extremely hard to disentangle the multiple strands of genres which they so clearly delight in toppling like so many statues and icons in the temple of musical history.

When you blow away the froth, I’m not sure how much substance there is to this “weird junk improv”, but it’s an enjoyable rollercoaster ride for sure. Be sure to seek out their previous albums on Soundispatch, such as Opening Craze Refrigerator, Handshakes and Handgrenades, and Eat Your Makeover. This release from 26 November 2014.