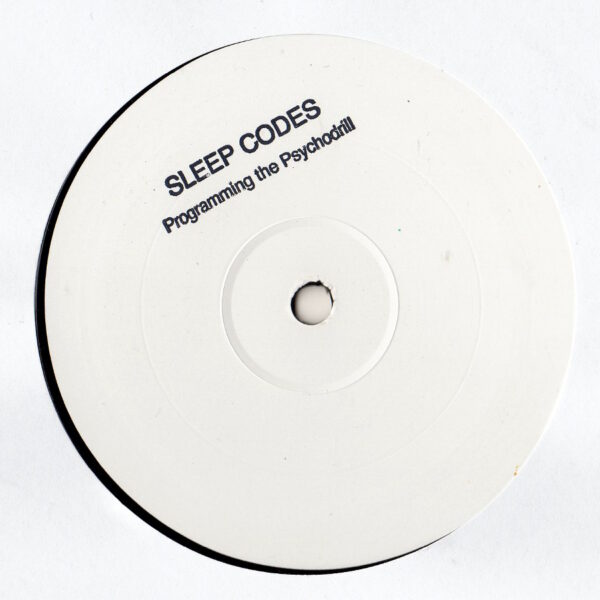 We’ve heard from Imaginary Forces before with the 2013 cassette Begotten…this was a splendidly dark and dismal piece of droning ambient monstrousness with added layers and throbbing aspects, intended as a tribute to the cult movie of the same name with its bizarre swaddled figures… all music and sound produced by the London musician Anthoney J. Hart. Happy to receive his Corner Crew EP (SLEEP CODES XERO 006), which we’ve had here since 26th August 2014…this one is easier to locate in the context of his dance-music upbringing, but it’s still daringly experimental and far-out, one might even say slightly sinister in tone. There’s something about its steady insistence – some would call it remorselessness – that unsettles the mind in short order, and it’s like meeting a mysterious stranger dressed in a trenchcoat who utters little, but probably conceals a sharp weapon up either sleeve of that coat. The run-out message on Side A “Either Join The Crew Or Get Beat Down” likewise doesn’t inspire me with much hope of escape from this potentially fraught situation. Elements of techno, dub and even shades of industrial metal music are forced into a brutally simplistic matrix of abstracted beats, pulses, bass rhythms, and tiny micro-sliver samples; the total effect is mesmerising, but also makes one quite paranoid, discerning important information concealed in brief, inaudible messages that might save one’s life if one could decode them, but at the same time we are constantly being lulled into an artificial sleep in a menacing hospital environment, from which procedure we might suddenly wake up in a hideously mutilated condition. It takes a special kind of mind to create this stark sense of tension…great to hear these shades of nightmarish industrial cold-wave disguised in the form of dance music…poisonous mind-numbing ether contained in a milk bottle.