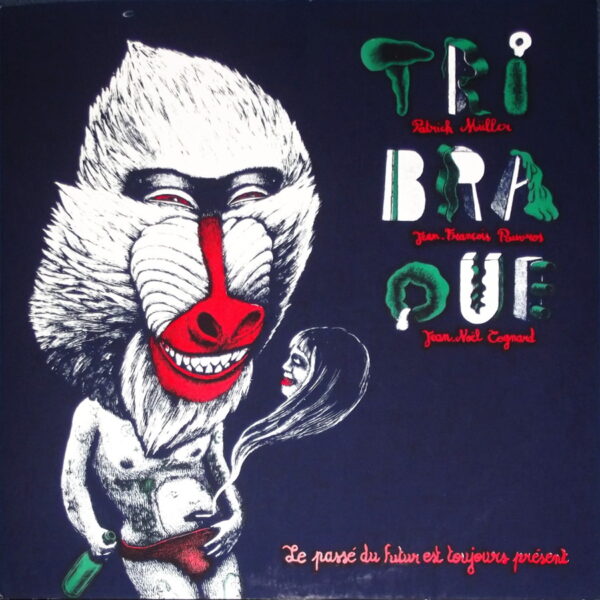 Last heard from French avant-rock trio Tribraque in 2010, with their self-titled album which was simultaneously released on CD by the trAce label and as a lavish vinyl item from Bloc Thyristors and Bimbo Tower. On Le Passé Du Future Est Toujours Présent (DISQUES BLOC THYRISTORS 0180 / trAce Label CD 039), the trio of Jean-Noël Cognard, Jean-François Pauvros and Patrick Müller serve up another four tracks of their agitated rock-noise sprawl; the CD version, which is now included as a cover-mount inside the vinyl release, offers the same music plus a further three tracks across 25 generous minutes of sound.

Tribraque play a species of discordant rock music with a lot of energy and passion; it shades into Industrial music, experimental art-rock of the 1980s such as I’d associate with the ReR label, and overlaps to some degree with the sort of grim, abstract noise that fellow French player Franck Vigroux sometimes creates in his studio using synth and guitar pedals. Tribraque do it with guitar, electronics and drumming…what strikes me on this spin is how they tend to overdo everything, aiming at maximal noise and maximal performance on each cut…for instance, the guitarist Pauvros is forever pulling on his whammy bar, pushing hard on the pedal FX, and sliding his strings fit to bust for each action-packed solo. And the drummer Cognard cannot help padding out the available spaces with expert drum fills, doing more than just providing a rhythm. Clearly, they would hate to short-change their audience. It’s solid playing without a doubt, but it also feels slightly dated; harking back to progressive rock flourishes, or even in places to earlier forms such as Hendrix-like psychedelic guitar flame-bursts.

This excess becomes even more evident when the band cover a Trent Reznor composition ‘Hurt’ on the B side; it’s fair to say they improve enormously on the original recording of this grotesque self-regarding “ballad”, but at the same time it feels like Tribraque can’t really “do” contemporary music; the ideas of economy, restraint, and simplicity learned from post-punk music seemed to have passed them by somewhat, and they feel obliged to reward the listener with elaborations and excesses that don’t feel entirely right for the material. However, there’s still much to enjoy in their assured performances, and the generally angst-ridden and despondent tone of their music should strike a chord with many alienated listeners.

As ever, a beautiful package; green vinyl pressing, and double-sided colour silkscreen printing for the cover. The graphiste Mika Pusse, self-styled “Mexican Chicken Hunter”, provided the imagery. The baboon’s face is so beautifully rendered that I’m not surprised it gets repeated and reused multiple times across the covers. On the front, this ape poses mostly nude apart from his red underpants, and a face embedded in his belly smokes a cigarette which conjures an image of a friendly girl grinning delight 1. His tattoos and wine bottle mark him as an unabashed lover of the sensual life, as clearly registered in his demonic smile of self-satisfaction. All of this imagery registers a strong sexual and wanton streak, absolutely none of which is present in the music. From April 2015.